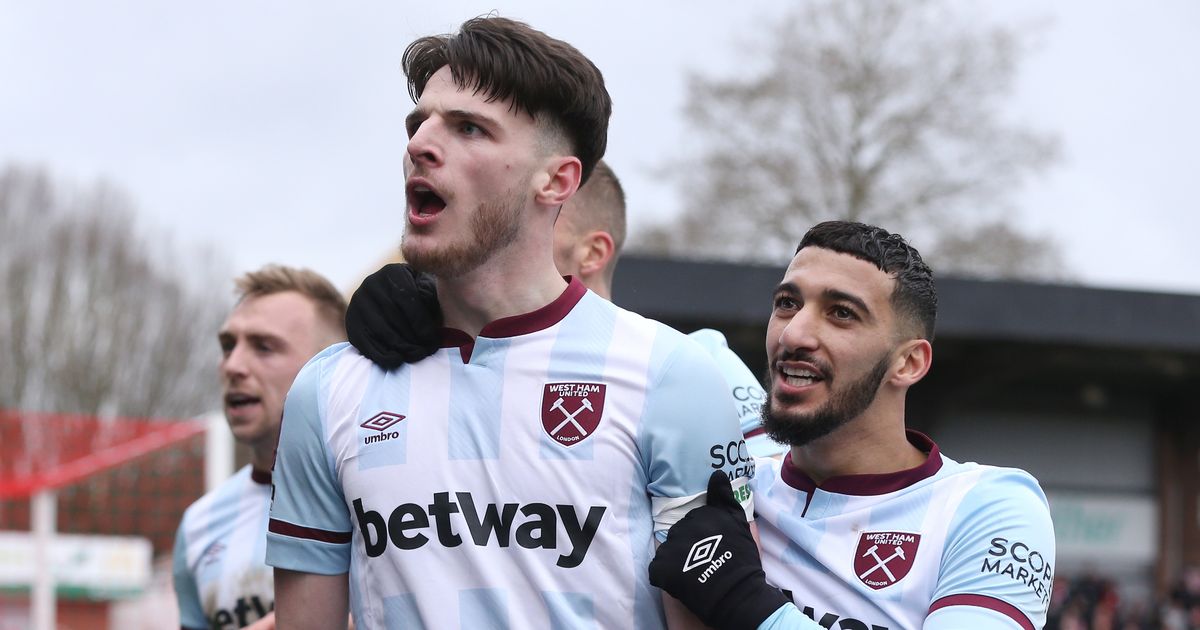 Declan Rice may be out of Manchester United’s reach after a warning was issued by David Moyes, meaning that a new target should be prioritised next summer instead

It was a quiet January transfer window at Manchester United after a relatively busy summer period, but neither Ralf Rangnick or Ole Gunnar Solskjaer strengthened in midfield.

United bolstered their attack as Cristiano Ronaldo and Jadon Sancho arrived at Old Trafford, and they added a World Cup winner to their ranks as Raphael Varane was brought in to partner Harry Maguire at the back.

But their midfield issues remain, and with Paul Pogba expected to leave in the summer, and Fred and Scott McTominay lacking consistency, United are expected to go all out for a new star ahead of next season.

Declan Rice is reportedly their main target, but former United boss David Moyes has handed them a massive blow with his recent comments, meaning that the Red Devils should turn to his England team-mate instead.

Rice is reportedly expected to be on the receiving end of serious approaches in the summer as United, Chelsea and Manchester City are eyeing up a move for the West Ham star, according to the Telegraph.

However, Moyes has come out and fended off potential interest by admitting that Rice will be staying at West Ham for some time, and that £100million was ‘cheap’ when the midfielder was valued last summer.

Ahead of West Ham’s 2-1 success against Kidderminster Harriers in the fourth round of the FA Cup, Moyes said: “I said in the summer that I thought Declan Rice was £100million. That was the sales, that was cheap, that was your chance to get Declan Rice cheap.

“When you’re 23 years old and you’re playing a number of games, there’s a lot of room for that to improve. If you look at the England squad in the Euros who lost in the final, it would be hard to suggest that Declan Rice hasn’t played as well as any other England player since those finals.

“He’s under contract and we’re really pleased to have him. He’s like a special edition Declan Rice, there’s not many like him. For me, he’s arguably playing as well as any midfielder player in European football.

“Special edition means that there are very few people like him out there. It’s like buying something that there aren’t many of them. He is a special, special edition, a special player and for me he is probably the best midfield player in Europe at this present time.”

Therefore, a move will either be extremely difficult, or it will have to smash the £100m Premier League transfer record set by Jack Grealish last summer, so United should look to sign Kalvin Phillips instead.

Rice may have gained ever more respect for his heroics in the England team during the European Championships, but his midfield partner Phillips was just as impressive.

The Leeds star was awarded England Player of the Year for his efforts, and the 26-year-old would be perfect to balance the United team in midfield.

Although Leeds will still demand a high price from their rivals, Phillips would be significantly cheaper than Rice, costing around half of the supposed £100m that Moyes has laughed at for his vice-captain.

And with a contract ending in 2024, United may be able to negotiate a more reasonable fee too.

Kalvin Phillips was named England Player of the Year
(

Phillips is known for his impressive passing range and ability to quickly start attacks by getting the ball out to more offensive-minded players.

Having played under Bielsa for some time, Phillips is already used to the high intensity style of play that Rangnick is trying to impose at United, and he would be a welcome addition at Old Trafford.