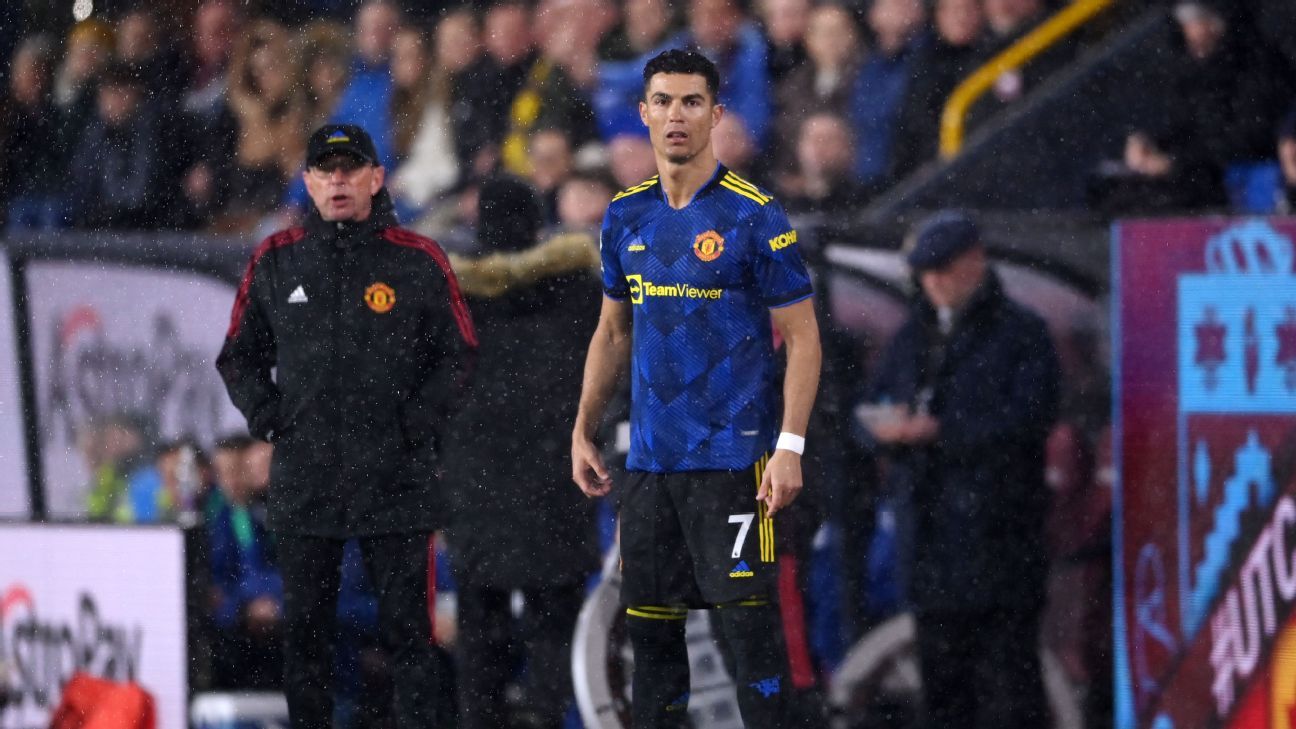 United could not beat Everton or Chelsea without their Portuguese star, but the 1-1 draw with Burnley at Turf Moor on Tuesday is arguably the most damaging of the lot. Failure to win against the league’s bottom team saw Ralf Rangnick’s side slip to fifth in the table courtesy of West Ham’s win over Watford.

Worryingly for United, Antonio Conte’s Tottenham are only three points behind but with three games in hand. Remember, Ed Woodward and the Glazers chose to pass up the chance to appoint Conte during the final days of Ole Gunnar Solskjaer’s reign. How silly they will look if the Italian can guide Spurs into the top four at their expense.

Rangnick, the man they chose instead, is learning very quickly that getting this team into next season’s Champions League is no easy task, although at Burnley he felt he had not been helped by referee Mike Dean, who chalked off a Raphael Varane header and a Josh Brownhill own goal in the first half.

“A frustrating night for us because we should have won that game comfortably. In the end it was also a little question of luck. One point for a performance like this is just not enough,” Rangnick said afterwards.

Rangnick says he has made United better and results, in general, suggest he’s right — but after watching the bruising FA Cup exit to Middlesbrough on Friday night, he bemoaned their inability to kill the game when they had the chance and the same was true against Burnley.

A positive first half performance ended with only Paul Pogba’s first league goal for 384 days to show for it. At half-time, it didn’t seem possible that United could leave Turf Moor with anything other than their sixth straight away win over Burnley, but in the end it was the same against Middlesbrough.

Jay Rodriguez’s clipped finish over David De Gea after 47 minutes was the hosts’ first shot of any kind. By that point, United had peppered Nick Pope with 12 shots and ended the night with 22, but the only statistic that mattered was that the evening finished one goal apiece.

“We took the game by the scruff of the neck in the second half,” Rodriguez said. David De Gea was also forced into a good save from Wout Weghorst.

After the game, Rangnick was keen to point to the two goals that were ruled out by the officials on either side of Pogba’s opener — but there were also too many good positions wasted and too many poor decisions made.

“I think we played a fantastic first half, couldn’t have played any better,” Rangnick said. “We scored three goals, the second that was disallowed I cannot understand. It was a very, very soft decision by the linesman. He flagged the foul five or six seconds after it took pace.

“Anyway it was 1-0 at half-time — we knew they would come out in the second half in a more aggressive way and the only thing I can complain about was we were not aggressive enough in the first 20 minutes of the second half.

“Again we played an excellent first half. We controlled and dominated the game. We scored the three goals but two were disallowed. If you look into the whole game we dominated for most of it. Winning one point is not enough and another frustrating night.”

Struggling to score is becoming a theme under Rangnick and in the German’s 12 games in charge, his team have scored more than one goal on just three occasions. By comparison, in Solskjaer’s last 12 games — as bad as they were — United scored two or more six times.

Rangnick has made man United more solid — nine goals conceded compared to 24 under Solskjaer — but it’s come at a cost. Their only real chance in the second half here was a Varane flick which was blocked by Ben Mee.

In Ronaldo’s 22 minutes off the bench, he was limited to two half chances and — as is now customary when things don’t go well — the 37-year-old sprinted down the tunnel the minute the final whistle sounded while his teammates trudged towards the away end in howling wind and rain to applaud the travelling fans.

It’s been more than a month since Ronaldo scored and the five games he’s gone without finding the net represents the longest spell without a goal for his club since a similar run with Real Madrid in 2010.

Rangnick needs to get his team scoring again as quickly as possible or United’s hopes of Champions League football next season will disappear faster than Ronaldo’s exit at Turf Moor.