England stormed to the World Cup final in 1966 but navigated the latter rounds of their momentous triumph without genius striker Greaves, who was replaced by hat-trick hero Sir Geoff Hurst Jimmy Greaves was England’s crown jewel who was left standing at the gates of glory when football came home.

As the final whistle sounded at the 1966 World Cup final, and they thought it was all over bar the Queen handing over the holy grail to Three Lions captain Bobby Moore, Greaves was the loneliest man at Wembley.

Amid the outpouring of jubilation on the England bench, the supreme goalscorer wore the look of a genius jilted by Jules Rimet.

Greaves had started the tournament as manager Sir Alf Ramsey’s first-choice striker until a robust challenge from French midfielder Joseph Bonnel in the final group match left him with a gash in his shin requiring 14 stitches.

Jimmy Greaves in action for Tottenham during his prolific playing days
(

His replacement, Geoff Hurst, headed the winner in the brutal quarter-final against Argentina where Ramsey denounced the South Americans as “animals,” and retained his place.

As Hurst went on to score a hat-trick in the final, still a unique feat 55 years later, Greaves was like the fifth Beatle – an essential accessory to greatness, but stuck in the background when England made it to No.1 in the charts.

How fitting that, two years earlier in 1964 – so the story goes – at the height of Beatlemania, John Lennon had spotted Greaves in the audience at a Fab Four gig.

Recognising genius amid the hysteria, Lennon paused between hits to announce: “We’ve got real royalty in here tonight.”

But nothing would ever compensate crestfallen Greaves when Ramsey’s Boys of ’66 wore the crown and he missed out on the coronation.

“I had missed out on the match of a lifetime, and it hurt,” he admitted later.

Although the wider world did not know it at the time, the cruelty of circumstance began his slide into alcoholism, an accomplice which wiped the 1970s from his memory like a computer hard drive.

Jimmy Greaves, who has died aged 81, was the greatest goalscorer England ever produced.

No disrespect to Wayne Rooney, Gary Lineker, Bobby Charlton or Harry Kane, but Greaves scored 44 goals in 57 caps – and none of them was against San Marino, Andorra, Eskimos, Teletubbies or Smurfs.

It will forever remain a stain on the game, and the archaic honours system, that he was never knighted.

And it even took 43 years for him to be awarded a World Cup winner’s medal because only the XI who conquered West Germany in the final were eligible to receive one in 1966.

Better late than never, along with other squad members and backroom staff he was finally presented with one at a Downing Street reception in 2009 after FIFA amended the rules.

Greaves may have sold his medal for £44,000 at a sports memorabilia auction later, but his aura as the ultimate finisher never deserted him.

He was incomparable – the best of the best – because he made goalscoring look easy.

In an era of heavy pitches and ferocious tackles, he would leave markers behind and skip round the goalkeeper as if they were all weighed down by hobnail boots and he was in dancing shoes.

He scored six international hat-tricks, still an England record – one of them in the 9-3 humiliation of Scotland at Wembley in 1961, the year Tottenham won the Double.

The rout, which reduced Scottish keeper Frank Haffey to the butt of comedians’ wisecracks, coined a new phrase in the clock-watchers’ lexicon. Q: “What’s the time?” A: “Nine past Haffey.”

Greaves, blessed with an Eastender’s innate humour and blissful comic timing, would become a sultan of punchlines himself, a perfect foil for chortling sidekick Ian St John on ITV’s brilliant antidote to starch-collared, po-faced football punditry, Saint and Greavesie.

A screen at Tottenham’s stadium commemorating their former striker
(

Somewhere at home, this correspondent is the portly sandwich filling in a photo with Greaves and Paul Gascoigne, two of English football’s all-time greats, taken before their stand-up show at Bournemouth 10 years ago.

Gazza was a hoot, but dear old Greavesie brought the house down.

Dusting down his joke book, he revealed his TV work had dried up after a short-lived alliance with Sky.

“They didn’t let me go, I left them,” he said. “It was f ** freezing putting up those satellite dishes in winter.”

He filled the Shelf at White Hart Lane, he filled his boots and he filled our lives with joy as a footballer, pundit and comedian.

But above all, Jimmy Greaves was the genius who missed out when immortality came calling in 1966.

And up there among the celestial constellations, somebody’s going to have a bloody hard job marking the brightest star.

In this article:Chelsea, Featured, FIFA 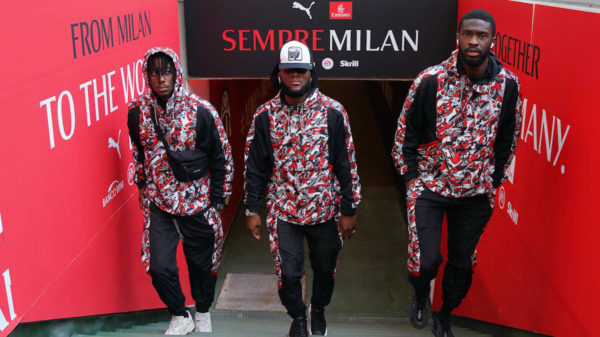