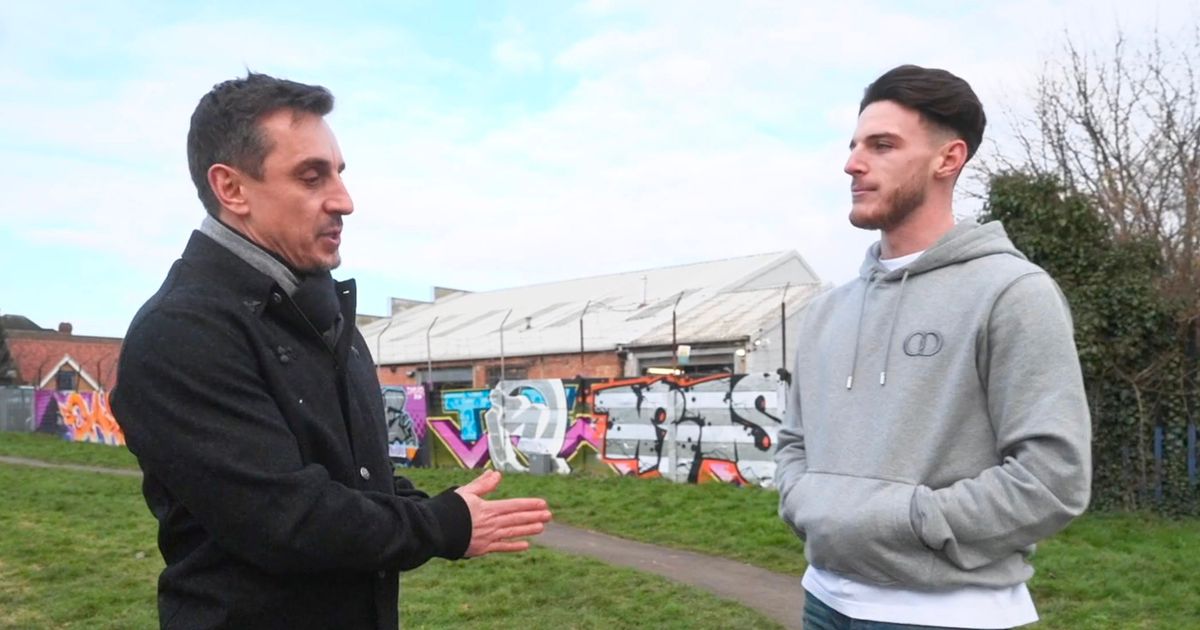 Declan Rice has developed into one of the Premier League’s best central midfielders, forcing former Manchester United captain Gary Neville to admit he was wrong in his initial verdict on West Ham star

Gary Neville has admitted to Declan Rice that he was wrong about which position the West Ham star would end up in.

The 23-year-old is now one of the Premier League ‘s best central midfielders, and a target for the likes of Manchester United and Chelsea.

Neville, however, was originally convinced that he was a defender by trade, having been labelled as a centre-back in his youth.

But the former United captain has now confessed his incorrect prediction on Rice, giving credit to fellow Sky Sports pundits Jamie Carragher and Jamie Redknapp for their more accurate verdict.

“You say pundits are always right, but three or four years ago, I’ll always look at my comments around you and I thought you were a centre-back playing in midfield,” Neville said on his YouTube channel, The Overlap.

Join the debate! Will Rice spend his career as a midfielder? Give us your verdict here.

Neville has admitted that he was wrong

“Carra never said that, to be fair, neither did Jamie Redknapp. They were always convinced you’d be an absolute top midfield player.

“And I have to say, three years later, they were a lot more right that I am.”

While the England international took the compliment, he argued there was some truth in the pundit’s opinion and explained how he almost returned to the back line for West Ham in January.

“At the start, you probably were right – I was a centre-back playing in midfield. And you could probably see that,” Rice admitted.

“On the ball, my defensive positioning, I was doing so much more work for the team defensively than I was on the ball, that is true, I probably was a centre-back playing in midfield.

“But as time has gone on, the more you play a position, the more confident you get with it. I’ve always known I’ve had this ability, it’s just confidence and putting it into place, which is what I’ve been doing this season which is good.

“I feel like, for the moment, I’m happy in midfield 100 per cent. I would never complain if I have to go back to centre-back.

“The manager [David Moyes] pulled me the other day, [Craig] Dawson might not have made the game, so I was going to play centre-half – he made the game – no problem at all, I know the position.

“It’s tough, it’s a totally different game to midfield but maybe one day, when I get older and the legs are gone, I might go back to centre-half, but at this moment in time, I’m loving this midfield role.”

Neville had also made an admission after filming the interview, writing a post on LinkedIn regarding the midfielder’s “impressive” personality off the pitch.

“Thought of the Week: ‘Don’t go too early’,” he wrote. “This is something that I often say to myself in punditry.”

Rice is still open to playing in defence
(

“You form a view on something either in haste or we always tell ourselves sayings like, ‘trust your first instincts’, ‘I knew I didn’t like them after five minutes’.

“However I interviewed Declan Rice this week for the overlap and I judged him as a young player at West Ham. I have to say I got it completely wrong. What an outstanding young person.

“Authoritative, confident, humble and quite simply the most impressive young footballer I’ve interviewed in 11 years.

“He’s also a fantastic talent and I went too early.”

The Overlap is a YouTube channel from Gary Neville in partnership with Sky Bet.