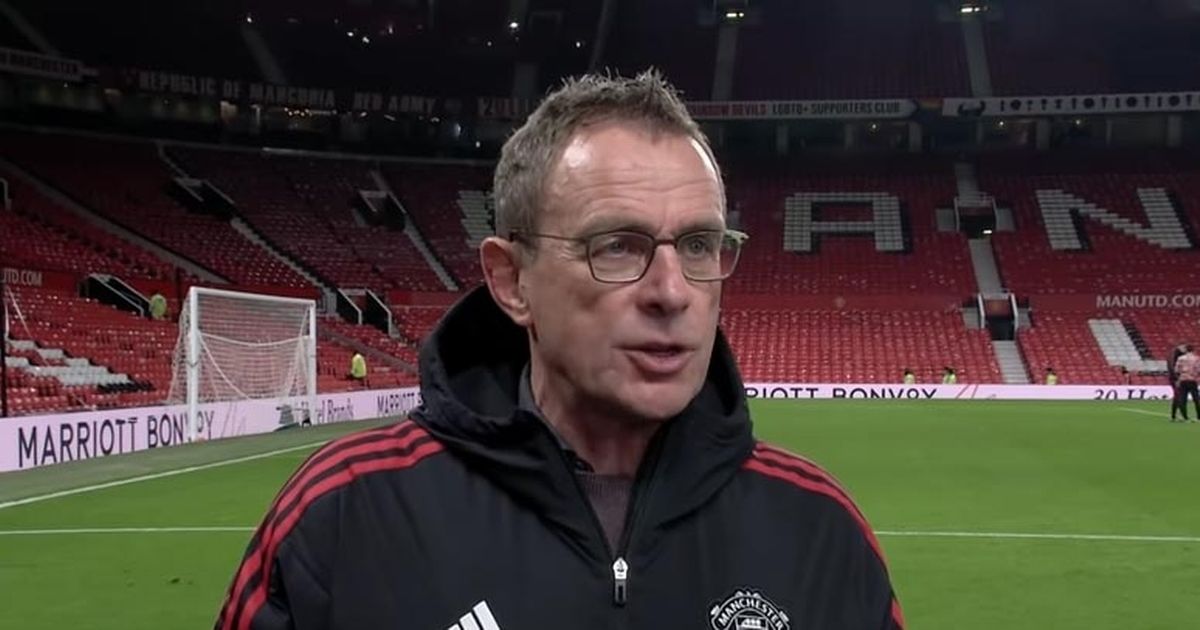 Ralf Rangnick has once again insisted that Manchester United ‘s players do care amid reports of discontent behind the scenes at Old Trafford.

The Red Devils face Brighton & Hove Albion on Tuesday evening in the Premier League, with Rangnick’s side looking to bounce back from another dismal draw.

United led 1-0 against Southampton on Saturday, only to see their lead slip in the second half for the third successive game.

‘[The] manner of the draw on Saturday was hugely frustrating for everyone – players, staff, and supporters,’ Rangnick wrote in his programme.

‘We’ve dropped too many points from winning positions but I don’t want anyone to think that is because the players don’t care or are not giving their all.’

Join the debate! Will Man Utd beat Brighton? Comment your prediction below.

Rangnick has admitted his frustrations with Man Utd
(

The acclaimed German coach previously defended his players’ attitude after Mirror Football revealed that 11 players wanted to leave the club in the January transfer window.

But after dropping six points from their last five league games, the Red Devils have come into question once more.

“I thought that was downright disrespectful on Friday – I did not find it funny at all,” Neville affirmed on his Sky Sports podcast.

“That they were describing Ralf Rangnick’s number two as Ted Lasso was not funny at all and not only was it disrespectful, but I found it disgusting.

“It sums up what I think of them: that they are disrespectful.”

Neville went on to liken the situation to Andre Villas-Boas ‘ final days as Chelsea boss in 2012.

Some of the Blues’ most influential players in the dressing room were accused of trying to get the Portuguese sacked, and Villas-Boas dropped them from the team in response.

Neville believes that the same thing is happening among the Red Devils’ roster now, and claims to know which stars are behind the leaks.

“They are at it, the PR teams, the agents and the marketing teams, as a self-preservation for their own player,” the ex-United right-back continued.

“But what they do not realise is that unfortunately, when they go to the media then those media people go to us – so we know who is briefing.

“The reality is that we do not like it, but we know who it is.

“We are not going to throw people under a bus here because we have that journalistic respect – but they are it in the same way that Chelsea were all those years ago.

“They need to stop it and work as hard as they can.”