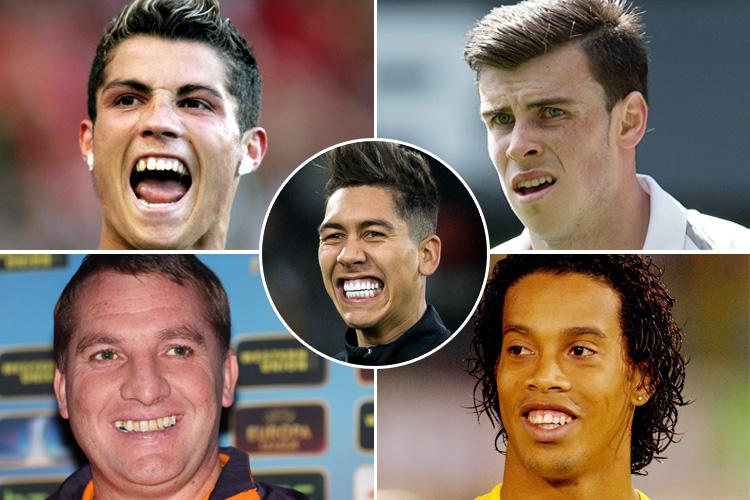 The world’s best players and managers believe teeth hygiene is important, with many now investing thousands of pounds in getting their gnashers whitened and fixed.

After all, with their lives under public scrutiny these sporting giants have made sure they will look their best on and off the pitch.

Cristiano Ronaldo, Gareth Bale and Philippe Coutinho are just some who have invested money in their smiles… it’s definitely a marked improvement.

The United legend always wears a grin these days, and it’s all because he has perfect teeth.

When he was a teenager at Man Utd, they were slightly wonky, yellow and it’s fair to say his smile was gummy.

But after a few good years of solid wages earned at the Red Devils and Real Madrid, he wore a brace, had corrective surgery, whitened them up and now looks the superstar he is.

Like Ronaldo, Gareth knew he had to invest in his looks to be recognised as one of the world’s leading talents.

Once a pale teenage prodigy, he slapped on some fake tan. But it was his teeth that he really went to town on.

HOW TO GET FREE BETS ON FOOTBALL

Once neglected, they’re now pearly white and went nicely with the white of Real Madrid and Tottenham’s jerseys.

Growing up in Rio de Janeiro, it would be easy for any Brazilian kid to have poor teeth without proper access to a good dentist.

So, as soon as Philippe hit the big time, he got his teeth whitened and he regularly beams his gnashers towards journalists in press conferences and on social media.

The Brazilian playmaker doesn’t look out of place among the Premier League’s elite, and soon Prem fans can see them up close and personal when he is in action for Aston Villa.

Even managers aren’t immune to a little vanity here and there.

In his earlier press conferences, the Northern Irishman flashed a rotten smile that had us reaching for some floss.

However, in recent years Brendan’s teeth are as impressive as Leicester’s 4-0 win against Nottingham Forest on Monday – absolutely sparkling.

The former world’s best player was a bit slow on the up-take when it came to visiting the dentist.

Throughout his playing days, Ronaldinho’s buck teeth were infamous not just because they stuck out, but also because they were yellower than the sun.

Now, Ron has more to smile about, not that he didn’t wear a smile on the pitch whenever he played.

Wonder if he regrets not getting them done sooner?

The former Spurs and England legend didn’t have bad teeth during his playing days. However, they did need a good polish.

The TV personality reportedly pays around £500 to get his teeth whitened by a top Harley Street dentist. The results are really remarkable.

It looks like Firmino shares the same dentist as his former team-mate Coutinho, if comparable snaps of the Brazilian are evidence enough.

The hotshot forward has been a shining light for Liverpool since arriving on our shores and his teeth aren’t dull either.

In fact, they might just be the brightest teeth known to humankind, and we’ve seen them brightening up stadiums around the Premier League this year.

Judging by photos of when Firmino first arrived on our shores, he’s had them whitened and had some of the chips filled in too.

There really is something in the water at Anfield…

His football teams are dazzling, but his teeth certainly needed a good clean.

So, it was no surprise that Klopp had decided enough was enough, out with the decay and in with a set of new teeth.

Klopp’s pearly whites have been proudly on display all season and are far less dull than his moans about fixture congestion.

Not only are they whitened, it looks like he’s had veneers fitted.

Then there’s Jose, the dentist whisperer…

Roma boss Jose Mourinho is reportedly a stickler for dental hygiene and insists his squads get checked by a dentist.

When the Portuguese manager first arrived at Old Trafford, he reportedly insisted the whole squad went for a check-up.

He was said to have done the same at Chelsea, because he believes that having better teeth improves performance.

While there’s no scientific evidence to suggest that, the British Journal of Sports Medicine claimed that the dental health of footballers is ‘poor and affects performance’ in a recent study.

And who are we to argue with ‘The Special One’ who has won many titles over the years for various clubs.