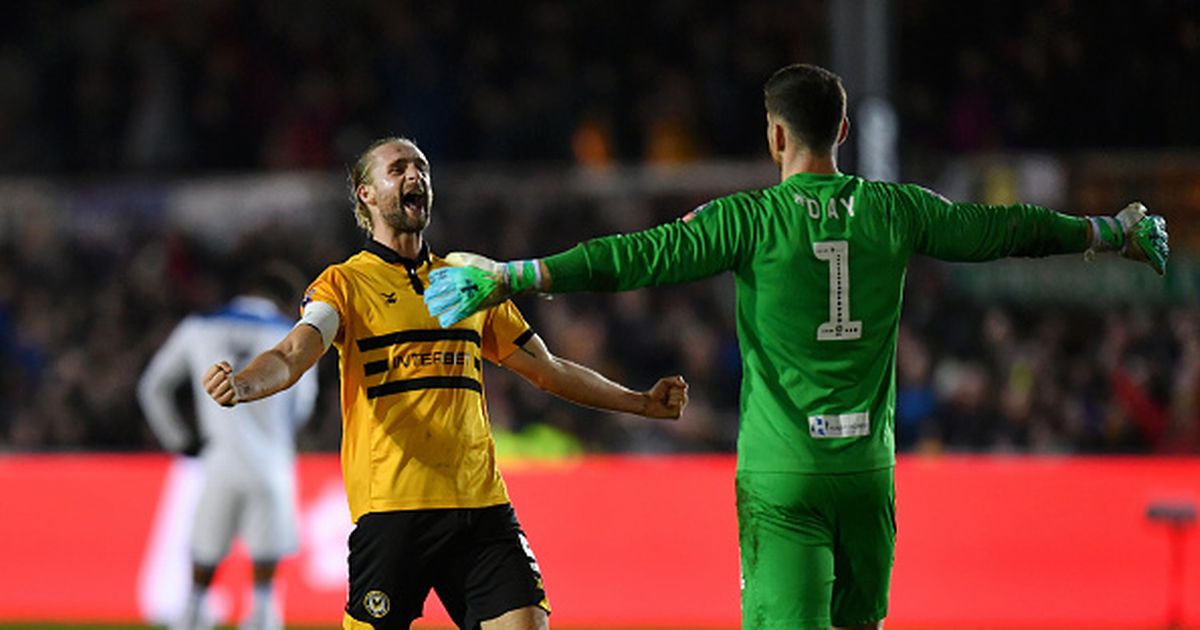 EXCLUSIVE: Fraser Franks was 28 when he was told he had to retire from football, just a few days after Newport’s magical FA Cup run ended against Manchester City

“My first thought was I need to be out of here in the morning for training but within a week I was told it was the end of my playing career.”

Three years ago, Fraser Franks was just 28 when doctors entered his room in the cardiovascular ward of a South Wales hospital and delivered the crushing verdict.

The Newport County defender had been a hero of the magical FA Cup run under Mike Flynn that concluded in defeat to then Premier League champions Manchester City.

Franks was man-of-the-match in the famous win against Leicester City at Rodney Parade two rounds earlier.

But it was just days after trudging off the pitch against Pep Guardiola’s all-stars that his life changed indelibly.

HAVE YOUR SAY! Who will win the FA Cup this season? Let us know in the comments below

After Newport’s brave 4-1 defeat to City, Franks was selected to start in the midweek fixture against Notts County, but he soon knew something wasn’t right.

“I just didn’t feel great on the way there and when I played I felt really lethargic,” he exclusively told Mirror Football.

“I didn’t feel like I could continue early on but then I scored which is a rarity for me and it gave me an adrenaline boost.

“But my legs weren’t moving at all and I couldn’t finish the game so came off with 15 minutes to go.”

But desperation set in as his heart raced out of control and he realised his worst fears after being rushed to hospital.

“I started sweating and shivering and then I started getting a racing heart,” he said.

“It got to the point where my heartbeat was shaking the bed. It was going that fast and I said to my wife ‘you’re going to have to take me to hospital here’.

“She took me in, they rushed me straight through and my heartbeat was around 260-270 (BPM) so they knew something was wrong straight away.

“I was thinking it’s literally a week ago I was playing against Man City and now I’m the youngest guy on the cardiovascular ward by 40 or 50 years.

“Within a week in hospital they had found a couple of issues and that was the end of my playing career.”

Doctors advised devastated Franks that complications with his heart meant he must retire with immediate effect.

Franks had suddenly lost not only his career and financial security, but his identity, with football the focus of his entire life since joining Chelsea’s academy at an early age.

An extensive career included 320 games played and three promotions, but at 28, there was still so much more to come.

Franks was reaching the prime of his career and tantalisingly missed the chance to lead his Newport teammates out at Wembley for the League Two Playoff final at the end of the campaign.

“When I first came out of the game there was a novelty of a different routine and there was something that made me enjoy the freedom,” Franks admitted.

“But when that novelty wears off you’re thinking ‘What am I doing now?’

“It was a delayed effect for me. I tried to kid myself that I was okay and didn’t miss it but a few months later it couldn’t have been worse.

“It’s not just a job for a footballer. It’s who you are and when that’s taken away there’s nothing left to give.”

After struggling with anxiety, Franks sought therapy through the PFA and unburdening his negative thoughts ultimately helped find a new perspective.

His new identity came through education with a Masters degree in sport directorship, and he now uses his experiences to give advice to young athletes about dealing with mental pressures during and after their careers.

Escapism is rife in retired footballers and Franks is all too familiar with players resorting to excessive alcohol and gambling as they chase playing highs.

He added: “So many players that finish football eat and drink what they want, don’t train, put on loads of weight and look in the mirror disgusted. I’ve seen a big correlation with the people who don’t keep fit and the ones who struggle mentally and turn to alcohol.

Newport’s players and coaches celebrate the win over Championship Middlesbrough
(

“Players need to prepare for a career after a career that they’ve not even started yet. Any player that is 27 and over has this nagging feeling of dread, worry and panic.

“I retired at 28 but from the age of 25 I was already panicking about what I was doing after football.”

Fraser believes more needs to be done to support and educate players ready for life after the game.

“We need to separate the player from who you really are and realise there is a life after football,” he said.

“People label players like James Milner as an old man and he would be a young kid in the office.

“Football has a way of ageing you like nothing else.

Franks reflects back on the highs and lows of his professional career but it’s premature ending certainly won’t define him.

And his message is helping more retiring football stars forge a new path rather than slip through the cracks.