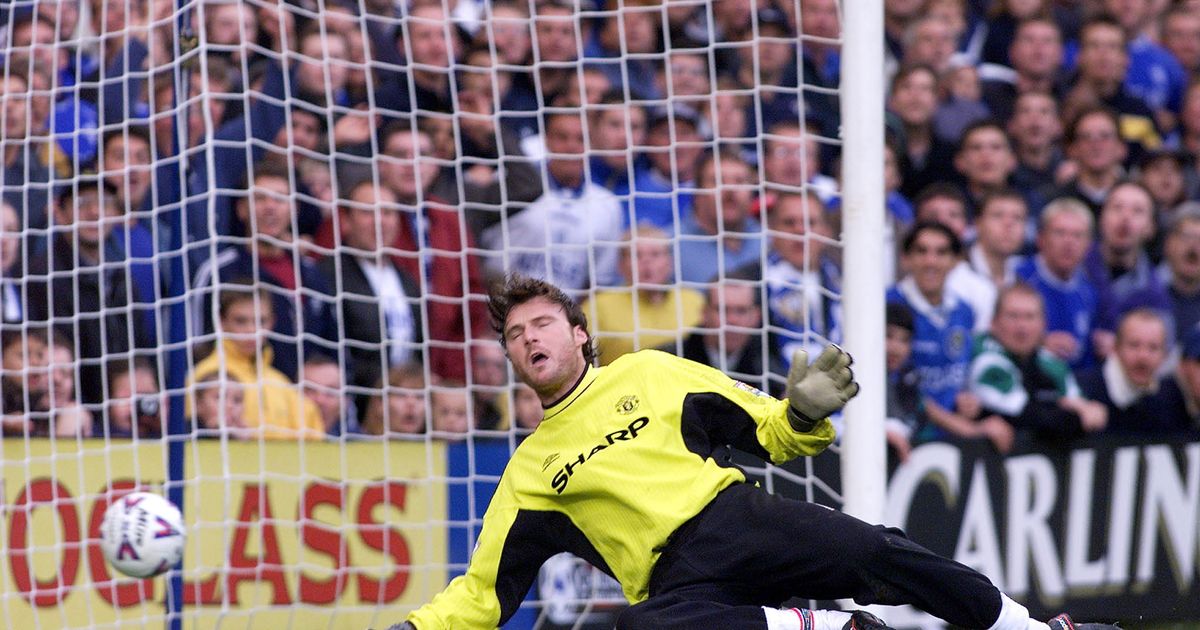 Say the name Massimo Taibi to a football fan and you can guarantee the one image that immediately springs to mind.

Taibi spent 22 years playing professional football. He played for 10 different clubs in his native Italy and won the Serie B title with Piacenza.

Yet to English fans he has been condensed down into one bitesize chunk: a memory of an infamous howler that he will never shake off for the rest of his life.

When Taibi joined Manchester United from Venezia in August 1999, he should have been the goalkeeper’s big break.

Instead, it turned into an all-too-brief nightmare, which contained one mistake that came to define him.

Taibi was a flash in the pan at Old Trafford, but with Southampton visiting United’s home ground today in the Premier League, it is worth revisiting the Italian goalkeeper’s spell at the club.

Massimo Taibi is defined by one mistake

But Peter Schmeichel’s departure and an injury to Mark Bosnich left the club needing another goalkeeper and Sir Alex Ferguson’s brother Martin recommended the 29-year-old, who he believed was a snip at £4.5million after scouting him.

“I left Italy in 1999 because I could not turn down a club as great as Manchester United,” Taibi told Manchester Evening News in 2016.

“I did not know Sir Alex Ferguson well other than I knew he wanted to sign me. I think I only met him once beforehand.”

Taibi was rushed straight into the starting XI almost straight away, but landed on his feet, making some great saves in United’s 3-2 win over Liverpool at Anfield on September 11, 1999.

“It was hard to replace Schmeichel and there was so much pressure on me,” Taibi said.

“But my debut against Liverpool was a great memory. It was a beautiful game as I won man of the match.”

Massimo Taibi was signed after an injury to Mark Bosnich
(

Taibi did not speak English upon his arrival in Manchester, where he became team-mates with the likes of Roy Keane, Gary Neville, Paul Scholes and David Beckham, who were fresh from winning the Treble in the 1998/99 season.

He shared the goalkeeping duties with Raimond van der Gouw, who had to take Champions League duties as Taibi joined too late to be registered in the competition.

Taibi communicated with the United bench via an Italian restaurant owner, who was roped into being a pitchside translator by goalkeeping coach, Tony Coton.

But that didn’t stop him from making a second consecutive man-of-the-match performance in a 1-1 draw against Wimbledon. Everything seemed to be going swimmingly.

He even got on the right side of fiery captain Keane, who was famous for not suffering fools.

“Roy Keane was a really great guy, [with] so much charisma. He really led people,” Taibi told American Gambler in 2020.

“He was the leader, but it was a dressing room full of leaders, of good people and great players. They really looked after me.

“I remember Ryan Giggs, David Beckham and, of course, Keane himself, they really looked after me.”

But he was then forced to watch on from the sidelines for Champions League games against Zagreb, Sturm Graz and Marseille. And by the time he returned to the team, everything was about to change in a flash.

‘It looks ridiculous but it happens’

“I honestly do not remember how that mistake happened,” Taibi reminisced to the MEN. “Unfortunately, it was a hiccup. To this day, I do not know how it was even possible.

“The media were bad but it was part of our job – my team-mates were all wonderful with me. I used to think about it a lot but I don’t as much anymore.”

He might not think about it, but the mistake is ingrained into the minds of all United fans of a certain age.

HAVE YOUR SAY! Is Massimo Taibi’s the worst blunder in Premier League history? Comment below.

Matt Le Tissier was the fortunate one, as his weak pot-shot from 25 yards somehow went through Taibi’s legs as he stooped to collect it. The ball trickled over the line in the most embarrassing way possible.

In that moment, when he wanted the ground to swallow him up, the legend of the ‘Blind Venetian’, as one newspaper called him, was born.

United drew the game against Southampton 3-3, but it was the beginning of the end for Taibi, despite Ferguson’s sympathetic reaction.

“For me, that wasn’t a terrible error as such, certainly not something to label you with for life. It was just one of those things which happen to goalkeepers. I’ve seen plenty in England and Italy, believe me.

“Going through the legs, it looks ridiculous, but it happens often. It’s not the first, it wasn’t the last.”

Taibi played just one more game for United: a 5-0 thrashing by Chelsea on October 3. He had been with United for just 33 days, but that defeat – United’s first in the league for 10 months – was a horrible end point to his stint in the Premier League.

Problems in the goalkeeper’s personal life had arisen and he wanted to return to Italy.

“Of course, it was 100 per cent my decision to leave Manchester United,” he explained.

“I had a four-year contract. I remember, for example, Teddy Sheringham, who knew I had a serious family issue, asked me to stay.

“Even Sir Alex Ferguson begged me to wait, to go back to Italy for two weeks to try to resolve the issues and then come back to Manchester.

“The team had to go to Brazil for the Club World Cup and he said to me: ‘You don’t need to come with us. Stay and take the time to resolve your family issues and you re-join the team when we get back’.

“But in that moment, my family issues were just too big, so I decided that I had to leave – and that was my mistake, because Ferguson and my team-mates helped me throughout my issue.

“In Italy, two weeks of holiday with that kind of human consideration that Sir Alex offered me, just doesn’t exist. I was just too impulsive.

“I realised soon after that I would not have been able to resolve my issues however, and it would have been just the same if I had stayed in England. But it was too late. It’s the only football regret I had.”