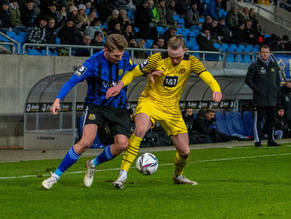 Borussia Dortmund’s U23s have suffered their first defeat in their third game of the year, ultimately losing 2-0 away to a strong Saarbrücken side after 90 intense minutes. BVB had a spell of pressure midway through the second period but the equaliser would not come.

The opposition: Prior to kick-off, the Saarland side sat in fifth place with 37 points from 22 matches – three more points than the Black & Yellows, who occupied seventh spot in the table. Coach Uwe Koschinat’s charges had won six of their previous eight matches across all competitions and had recently improved their position in the standings thanks to a victory against Duisburg. The standout performer on the pitch in that game was once again forward Adriano Grimaldi, whose brace set the Saarbrücken outfit on the path to victory. The striker went into the game against BVB having already notched 10 goals and four assists this season.

The match: The home side made the slightly stronger start to the match in front of 1,000 spectators at Ludwigsparkstadion. Having dispossessed Abdoulaye Kamara in the seventh minute, Saarbrücken switched the play at speed but Julian Günther-Schmidt missed the chance to open the scoring. Striker Adriano Grimaldi then got into a dangerous position in front of the BVB goal but could not beat Dortmund shot-stopper Stefan Drljaca. The follow-up was not on target either (9). Dortmund’s first chance fell to central defender Antonios Papadopoulos, who failed to steer Raschl’s cross into the back of the net (12).

Saarbrücken had slightly more of the game overall, while the Black & Yellows defended compactly. The best chance of the game for 1. FCS up to that point fell to attacker Robin Scheu. Drljaca lost possession of the ball to the speedy winger, but he was not able to put the ball in the back of the net from close range (31). BVB then had another goalscoring opportunity with 10 minutes of the first half remaining, though Berkan Taz’s free-kick from the edge of the penalty area struck the wall and the half-time whistle sounded with both teams goalless.

Both coaches opted against making any changes at the interval. It was again the hosts who made the brighter start, taking advantage of a moment of carelessness in the Dortmund defence to break the deadlock and go 1-0 ahead with slightly over 50 minutes played. Striker Grimaldi beat BVB goalie Drljaca from close range. Borussia were struggling going forward, prompting BVB coach Enrico Maassen to make his first substitutions just shy of the hour mark: Justin Njinmah and Haymenn Bah-Traore replaced Richmond Tachie and Abdoulaye Kamara.

The Black & Yellows looked a bit livelier after the hour mark and increasingly kept the Saarbrücken defence occupied. Berkan Taz struck the upright after being teed up by Bradley Fink (63). BVB were now seizing the initiative, dominating possession and pushing their hosts back into their own penalty area. The best chance in the ensuing period fell to Bradley Fink, who was played in by Berkan Taz in the 72nd minute. The Dortmund striker was denied by goalkeeper Daniel Batz in a one-on-one, however. Borussia could sense their chance to equalise. Enrico Maassen subsequently introduced some more fresh legs, bringing on Marco Pasalic for his comeback following a 143-day injury lay-off.

Following a free-kick in an attacking position, BVB were hit on the counter by Saarbrücken in the 72nd minute. Substitute Minos Gouras beat Drljaca in a one-on-one and Saarbrücken then set about defending their lead with discipline, with BVB scarcely able to build attacks. Having won their last three away games, the Black & Yellows this time ended up on the end of a 2-0 defeat. BVB’s U23s currently occupy eighth place in the 3. Liga table with 23 rounds of matches played.

Outlook: The Black & Yellows are next in action on Saturday when VfL Osnabrück visit Stadion Rote Erde (14:00 CET).