U23s set for North Rhine-Westphalian derby in Duisburg on Sunday 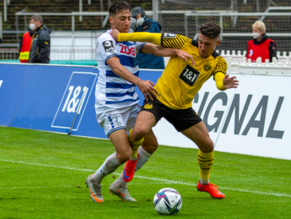 Borussia Dortmund’s U23s are preparing for a trip to MSV Duisburg on Sunday afternoon (14:00 CET). Coach Enrico Maassen’s charges will go into their next 3. Liga clash this weekend having been held to an unlucky 2-2 draw by VfL Osnabrück last Saturday.

With 23 points from their opening 24 games, MSV Duisburg sit in 16th place in the table, meaning they are only one place above the drop zone. The gap to 17th place, which is currently occupied by Hallesche FC, is only one point.  In 2022, Duisburg have won twice and lost three times, with coach Hagen Schmidt’s side suffering a 6-3 defeat to VfL Osnabrück in their last outing. Duisburg have the worst defence in the league, having conceded 48 goals in total – an average of two per game. That said, MSV have kept clean sheets in six of their seven victories this term.

BVB are in a comfortable position in mid-table following their stalemate with Osnabrück, with a 12-point cushion over Duisburg. They are five points behind third-placed Eintracht Braunschweig. BVB are still the second-best away team in the division, having amassed 21 points on their travels. They will, however, be without the suspended trio of Franz Pfanne, Richmond Tachie and Lennard Maloney, plus the injured Kolbeinn Finnsson.

BVB won the reverse fixture at Stadion Rote Erde by a 4-1 scoreline. Steffen Tigges (two), Berkan Taz and Timo Bornemann all found the net in response to the opener from Orhan Ademi, who has already scored 11 times this season. Former Black & Yellow Marvin Bakalorz will not be available for Duisburg after picking up his fifth yellow card on Wednesday.