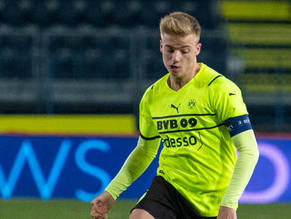 Borussia’s U19s will be up against Manchester United in the UEFA Youth League last 16. “That’s an absolute highlight for our lads,” delighted coach Mike Tullberg said of the upcoming clash with big-name opposition at Leigh Sports Village on 1/2 March.

The pairings for the quarter-finals were also determined at the draw at UEFA headquarters in Nyon. Should BVB overcome the major obstacle that awaits in England, they will be at home to the winners of the derby between Real Madrid and Atlético Madrid in the quarter-finals (15/16 March).

“We’re all looking forward to Manchester. But we’re of course aware of the difficulty of the task,” said Mike Tullberg. Man Utd have a squad brimming with international talent. In the group stages, the Red Devils beat Young Boys (2-0, 2-1), Atalanta (4-2, 2-1) and Villarreal (2-1), but lost the home game against Villarreal 4-1.

The Black & Yellows have nothing to fear. This UEFA Youth League campaign has already seen them claim away wins against Besiktas in Istanbul (3-2), Ajax in Amsterdam (5-1) and, more recently, against Empoli in the play-off round (5-3). “We want to become the first BVB team to reach the quarter-finals,” explained Mike Tullberg. (wiwi)