"The reaction people wanted to see from us" 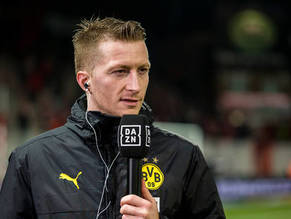 Marco Reus spoke to DAZN about the match in Berlin, an unsettling week and the upcoming match against Rangers on Thursday.

Marco Reus on the importance of the result and the balance of play:
The win will do us a lot of good. We’ve had a very unsettling week, but we didn’t want to dwell on the past for too long and instead wanted to stay positive and look forwards. That was the reaction that people wanted to see from us. We played very seriously in the first half and scored the goals – like we had set out to do. We mostly defended in the second half, which we didn’t necessarily want to do. Union really wanted to score a goal quickly. Union are a good team and deserve to be up there. We really wanted to embrace the fight, which we’ve hardly managed to do here over the last two years. It was a good game from us, especially in the first half. We can build on this.

…on his first goal:
We had the rub of the green. Once we were ahead, it was slightly easier for us. I got very lucky for that goal. That has been missing a bit for us and for me personally in recent weeks. Today we earned it.

…on the defensive performance:
We’re delighted that we kept a clean sheet. That will hopefully also give us a bit of stability.

…on the discussions from the past week:
We’re able to play to our strengths when we get into a flow and make our mark in footballing terms. We’ve recently managed that too little. Then it becomes a mental issue if the natural flow isn’t there.

…on the table situation:
We’re focusing on ourselves. As long as we’re not playing consistently, we can’t think about competing at the very top. We need to show stability on the pitch: in our performances and results. Then the rest will come by itself at some point.

…on the match against Rangers on Thursday:
That’s a new competition for us. There’s also a cup to be won. Rangers are a strong footballing side. The clash will be decided across two games. We’ll embrace the challenge. But first things first, it’s important that we also enjoy the win today. The preparations for the Europa League game will then begin on Tuesday.
Transcribed by Boris Rupert