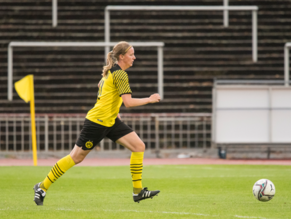 Borussia Dortmund’s women team put in a strong performance in a warm up game against SC Drolshagen, who play two divisions higher, and returned to the Ruhr from the Sauerland region with a 1-1 draw. Drolshagen were the more effective side in the first half, but Vanessa Heim scored a dream goal from 30 metres in the second half for a more than deserved equaliser. “It was a very good game from us. We took up the fight, played the ball around well and enjoyed more of the game. It was a really good test for us,” concluded BVB coach Thomas Sulewski.

Wind, rain and icy temperatures three degrees above zero at the “Sportpark Am Buscheid”: The conditions for the test match could have been better, “catastrophic” was Sulewski’s verdict. All the more remarkable, then, how well both teams adapted to the conditions in front of 250 brave fans. Right from the start, the game developed at a good standard with a lot of tempo.

The fact that the Drolshagen women were playing against a district league team was not apparent on the heavy pitch. Dortmund could have taken the lead from a corner, but the set piece did not lead to success. The former Drolshagen player Ann-Katrin Lau enjoyed another chance around the half hour mark, but her shot also did not provide the lead. The home side were also too imprecise in their attempts from distance and failed to trouble BVB goalkeeper Lena Kölmel.

After the restart, the game remained evenly balanced, with the Black & Yellows enjoying a slight advantage on the balance of play. Michelle Käseberg from Drolshagen took advantage of a mistake in Dortmund’s build-up play in the 57th minute, quickly storming into the box before finding the net at the near post. But there was no sign of shock: BVB remained well in the game. Vanessa Heim could have equalised about 15 minutes after the goal, but Drolshagen’s goalkeeper Lara Martin was on her toes. But then Heim really got going and equalised with a wonderful goal from 30 metres on 82 minutes! The game ended 1-1 after 90 minutes of a good game, especially considering the adverse conditions. “A two-tier difference in leagues was never evident,” said a satisfied Sulewski after the final whistle.