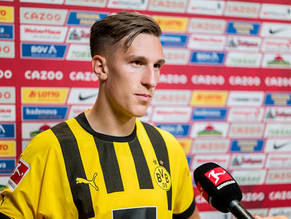 Nico Schlotterbeck, the toughest tackler on the pitch, was delighted with the three points and said in an interview with DAZN: “We need to play as even more of a unit in defence.”

“We got off to a good start, but then the opening goal happened. After that, Freiburg were all over us until the break. They had eight or nine set-pieces, but we managed to defend them relatively well,” said Nico Schlotterbeck after the game away to his former club, going on to add: “I know from experience that they’re very good at doing that. The second half was a bit disjointed. Then, Flekki was unfortunate to make that mistake. After that, we scored two more goals and decided the game in our favour. Nevertheless, Freiburg demanded everything of us and were the better team until the equaliser. We conceded the one goal, but it could have been two or three. We have to play as even more of a unit in defence. That will make it easier for us to do our job.”

The spotlight was understandably fixed on the defender – and he stepped up to the plate! In the first half, Nico Schlotterbeck won 88% of his challenges, making him the most successful tackler on the pitch. After 90 minutes, the rate had dropped down to 72%, but he still had the top mark among all players on the pitch. “The tension today was great. I wanted to show people what I can do. I spoke to Matthias Sammer this afternoon. He told me to play the way I normally do. That’s what I did.” (rbbr)