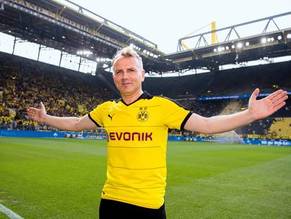 Signal box failure, game sacrificed. The Polish writer Zbigniew Masternak, who is writing a book about Borussia Dortmund, recounts his unique experiences of the kind that bring fans even closer together.

As I sit in the SIGNAL IDUNA PARK stadium, dressed in my black and yellow jersey, waiting for the game against Werder Bremen to start, I remember the first time I was in Dortmund in 2015. Back then, Evonik had arranged for the Polish national writers’ football team, led by me as captain, to take on our German counterparts. It was a close game that we won 4–3, with me scoring the first goal. Had it lasted five more minutes, we would have lost.

The world’s most beautiful stadium is rapidly filling up. In 2015, I was one of 81,000 fans who attended Dede’s farewell game. This whole city is football mad, there’s nothing like it. I’m here because I’m writing a book about Borussia Dortmund from the Polish perspective. After all, a lot of Polish immigrants and their descendants are part of the club’s history. Alfred Kelbassa and Alfred Niepieklo were the first. Then there was Smolarek, who was followed by Lewandowski, Piszczu and Błaszczykowski. Ever since my first visit, I’ve been a big Borussia Dortmund fan. Even my son Wiktor roots for the team when they play. In fact, it was when we were here in 2015 that he told me he wanted to be a footballer. He is 15 years old now and plays for Śląsk Wrocław.

At the sound of the Borussia Dortmund anthem, everyone leaps to their feet. A shiver runs down my spine. The game kicks off. Werder puts on the pressure, but our team responds with aggressive counterattacks. Oh no! Dahoud is injured and can’t finish the game. Just before the halftime whistle, Brandt puts us 1–0 up. My thoughts return to my book. Over the past few days, I have not only visited the German Football Museum and the BORUSSEUM but also engaged in many conversations with the people who have shaped this club. There is plenty to write about.

Hm, I’ve just received word that Dortmund Central Station is closed – no trains are running today. We booked train tickets to Berlin and intended to return to Poland from there. That’s going to make the trip back difficult. We would love to stay and watch the game to the end but we have to get back in time for my son’s league game on Sunday. What now? Christian Diercks from the BVB Evonik Football Academy comes to our rescue. After halftime, he drives us to Essen, where another train is waiting. That’s how it is when you’re part of the big Borussia Dortmund family. You’ll never walk alone.

As we travel, I keep track of the score on my phone. Guerreiro brings the score to 2–0. Well done, boys! The game is drawing to a close and it looks like we’ll make it to our train in time. When I check again after the final whistle, I can’t believe my eyes. Borussia Dortmund lost 2–3 in the last few minutes. I’m devastated. Could it have something to do with us leaving early? Either way, we’ll be back – and be sure to stay until the end to see Borussia win again. And I will write a wonderful book about the club, its great history, its players and fans.

In this section, Evonik, Borussia Dortmund’s main sponsor at all international games, shines a spotlight on fans who are passionate about the club despite living far away from the team’s home turf.

A long-standing partnership and love of football are not the only things that unite Borussia Dortmund and Evonik. The club and the specialty chemicals company also share the same values, including openness, tolerance and responsibility. That’s why, starting in 2017, the football club and its main sponsor have offered their employees the opportunity to participate in a joint annual educational trip to Oświęcim, Poland. Better known by its German name, Auschwitz, the town is synonymous with the Holocaust. With lots of eager takers, the 40 places are always snapped up quickly. For four days, Borussia Dortmund and Evonik employees explore the Auschwitz main camp, the Birkenau extermination camp and the Monowitz subcamp.

As Poland is an increasingly important commercial location for Evonik, the company opened an office with 13 sales staff in the capital Warsaw in early 2020. In this way, the Group is paying tribute to Poland’s role as one of Germany’s key trading partners. The office represents 12 business units.