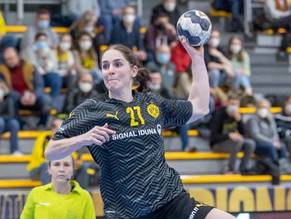 Final impressions count. That also goes for the Borussia Dortmund women’s handball team. And while it might not be their final outing in the Champions League, it will be their last home game of the group stages. On Sunday, the German champions from Dortmund will play host to Buducnost BEMAX Podgorica of Montenegro. Throw-off at Helmut Körnig-Halle is at 16:00 CET.

“We want to get two more points, which would take us to 11 points and make it a very, very good group phase,” said head coach André Fuhr, as he outlined the aim ahead of the penultimate group match on Sunday. But first of all, the coach has a balancing act to contend with. He must deal with the unconvincing display against Neckarsulm on Wednesday, while simultaneously preparing his players for their second-last group game in Europe’s elite club competition. Not an easy job. You could see he was not happy with his side’s performance at the compulsory post-match press conference. Whereas Neckarsulm coach Tanja Logvin described it as a good game, André Fuhr said: “No, I didn’t see a good game.”

The Black & Yellows had the returning Alina Grijseels, goalkeeper Madita Kohorst and right-winger Amelie Berger to thank for their 30-26 victory. The lack of finishing by both left wingers Jennifer Gutiérrez Bermejo and Jackie Moreno was particularly conspicuous. “We simply leave too much to be desired and make it unnecessarily difficult for ourselves, which can sometimes backfire. I didn’t like that,” remarked the coach.

Contrary to the original plans, the returning Alina Grijseels was needed on the court from the 20th minute onwards. The captain proved herself to be a clinical seven-metre thrower and ended up as the highest-scoring player of the evening with 11 goals. “I’m glad that everything held up and I didn’t feel any pain. Unfortunately, we made it difficult for ourselves,” explained Grijseels. The BVB captain suffered a broken nose in the cup match in Bietigheim on 2 January, before later injuring her lateral collateral ligament.

With the fit-again Grijseels on the left of the backcourt, the Black & Yellows will definitely have more options against Buducnost BEMAX on Sunday than they did in their last outing. “I’m happy that Alina is back. We coped with her absence surprisingly well, but Frida Rønning is experiencing a certain fatigue following this long and intensive phase. And Fatos Kücükyildiz had some good moments against Neckarsulm, but offered little danger in front of goal,” analysed Fuhr.

In any case, the Black & Yellows will have to improve if they want to claim the two points against their visitors from Montenegro. “Buducnost have developed well. It is not reflected in their results, but that means absolutely nothing,” said Fuhr. The second-bottom team in Group A are an unpleasant opponent that fight until the end.

The BVB women will play their final group match in Budapest on 19 February. The play-off phase then begins on 26 March.