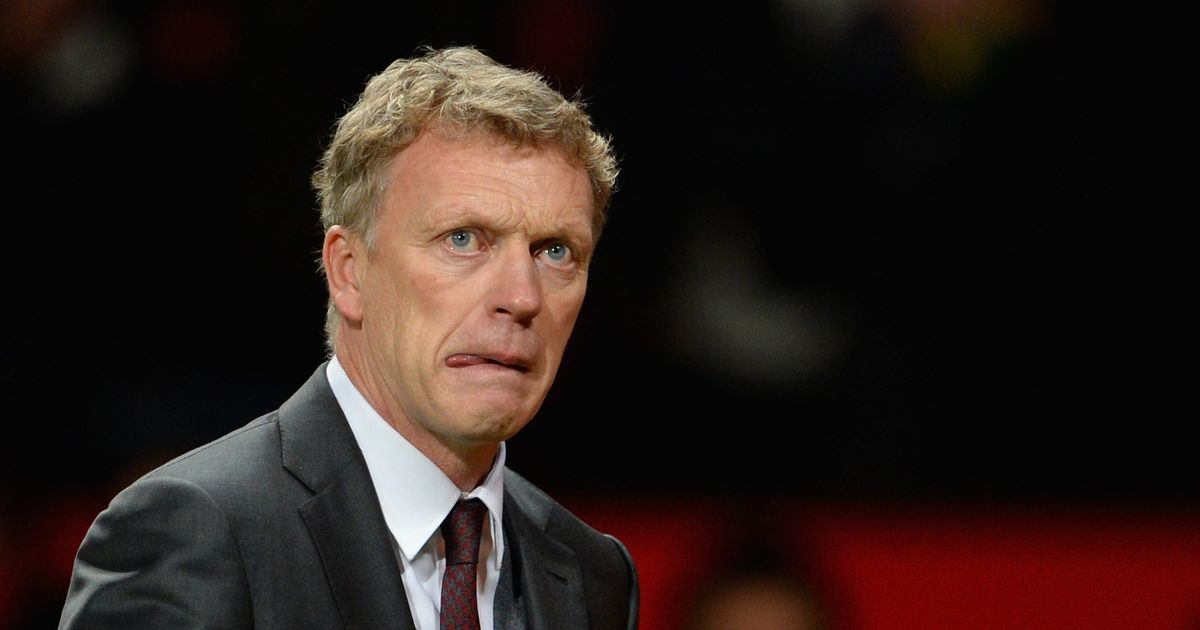 When David Moyes left Manchester United in 2014, not many would’ve predicted that eight years on, the man who first tried and failed to replace Sir Alex Ferguson would be in a healthier position than the club who sacked him after just eight months as manager.

But that’s the case in 2022, as Moyes brings his high-flying West Ham to Old Trafford on Saturday, where his tenure kicked off a downward spiral for the 20-time English champions.

In the opposing dugout will be Ralf Rangnick, the Red Devils’ fourth boss since the Scot got the boot.

But how did Moyes, an experienced and well-regarded Premier League manager capable of taking – with all due respect – much smaller clubs towards the top of the table, fail when he was donned ‘the Chosen One’?

It all started with a phone call in April 2013, while Moyes and his wife, Pamela, were out shopping in Cheshire.

Join the debate! Did Moyes deserve more time at Man Utd? Let us know your thoughts below.

Moyes was chosen by Ferguson to replace him at Man Utd
(

It was Ferguson, a long-time managerial confidant of the then-Everton boss, who asked him to come around to his house that afternoon on his day off.

“He’s [Ferguson] got a really lovely big room with all his memorabilia and stuff in,” Moyes recalled in an interview with Open Goal.

“He took me up and he says, ‘You’re going to be the next Man United manager’.”

That legendary Red Devils manager was retiring at the end of that season, knowing United were on the cusp of winning their 13th Premier League title.

Moyes, meanwhile, had impressed on Merseyside over the preceding 11 years, transforming the Toffees into a team regularly challenging for Europe.

So, it was settle – Ferguson announced his shock retirement to the world and his Scottish compatriot would take over a title-winning side, backed with a brand new coaching setup and incoming executive vice-chairman Ed Woodward (arguably the worse appointment of that fateful summer).

Reports in recent years have suggested that Moyes wasn’t the the Red Devils’ first-choice but the fact Pep Guardiola and Jose Mourinho were taken narrowed their options.

Nevertheless, the departing Ferguson had instructed supporters, on the hallowed Old Trafford turf, to “get behind our new manager.”

At first, it was easy to despite a mixed bag of a pre-season in Asia and a transfer window which saw only Marouane Fellaini signed for £27.5million on deadline day after being linked with players of a higher calibre such as Cesc Fabregas and Toni Kroos.

In his maiden match, Moyes pulled of a fear by becoming the first manager in the club’s history to win a trophy outright in his first season, with Robin van Persie scoring twice as United beat FA Cup winners Wigan Athletic 2-0 in the Community Shield at Wembley.

It only got better on the pitch, as he took his new side down to Swansea City for their first league game and Van Persie bagged another brace to help the champions to a 4-1 win.

But things were about to get messy.

A 0-1 loss at foes Liverpool preceded a 4-1 hammering to rivals Manchester City, with it coming to light that Moyes took too much of cautious approach for his unconvinced dressing room’s liking.

“Even the mindset in one of the training sessions, I hope I’m not speaking out of line here towards David Moyes but our mindset [under Ferguson], we never worried about the opposition,” centre-back Rio Ferdinand admitted on BT Sport in 2018.

“We never set ourselves up and said, ‘oh we need to make sure we contain this and contain that’.

“We’re going to try and win this game based on what we’re good at.”

Ferdinand added: “I remember the first couple of games, we played against Liverpool and Chelsea, and we were talking more about Hazard and Coutinho than we were about our own attacking tactics. So there’s doubt.

“Players then look at each other. “This ain’t us. We’re not used to this’.”

Those doubts soon spread to the terraces, with a 2-1 loss at home to West Bromwich Albion sending shockwaves around the Theatre of Dreams.

United, buoyed by the emergence of Adnan Januzaj, managed to enjoy a stable autumn and progress to the Champions League knockout stages.

But when they started December with back-to-back defeats and seemingly becoming over-reliant on teenage sensation Januzaj, Moyes’ work behind the scenes began to garner more scrutiny.

Although 2013 ended with four successive wins, the new year only brought more misery, as the Red Devils – already out of title race and scrambling to qualify for European football the following term – were firstly dumped out of the FA Cup after a third-round loss at home to Swansea.

Three days later and they lost to Sunderland in the first leg of a League Cup semi-final, eventually being knocked out on penalties in the return tie later in January.

That result was so sickening for the Old Trafford faithful that a drunken fan called 999 to report a crime and asked to speak to Ferguson – no, that really happened.

Juan Mata arrived from Chelsea in a transfer that has proved more beneficial more other managers than Moyes, but the Champions League offered a glimmer of hope.

After going unbeaten in the group stage, United drew Olympiakos in the last-16 and their task looked a simple one.

However, a 2-0 loss in Greece gave Moyes’ men a mountain to climb and they were saved by a Van Persie hat-trick in the second leg – the only magical Old Trafford night of the Scot’s tenure.

The axe was looming, though, with a spectator dressed up as the grim reaper spotted in the stands.

What particular ticked off supporters were his comments perceived as overly-lauding rivals City following a humiliation 3-0 Manchester Derby defeat at Old Trafford.

“I think we’ve played a very good side and it’s the sort of standard and level we need to try and aspire to get ourselves to at this moment in time,” he infamously told Sky Sports.

“I think we need to play better. We’re needing to come up a couple of levels at the moment and we’re not quite there.”

Entering his final month, April began with a respectable 1-1 draw at home to Bayern Munich in their quarter-final first leg, and the spirit of Ferguson came alive when Patrice Evra unleashed a rocket to give them the lead in Germany a fortnight later.

But the Red Devils soon capitulated, conceding the first of three unanswered goals within two minutes.

Only 13 days later and it was all over for Moyes, with the final nail in his coffin coming when he returned to Everton for the first and last time as United boss.

With another spectator dressed as the grim reaper, his soon-to-be former team went down 2-0 and Champions League qualification was off the table for the first time since 1990.

You’d be forgiven for thinking no tears were shed at the decision – but there certainly were.

Fellaini, who had been used as a stick to beat Moyes with throughout the season, revealed to The Athletic: “I was sad for him when he was sacked because I know how much he wanted to succeed.

“He brought me to England, then signed me for Manchester United, one of the biggest clubs in the world. I can never say anything bad about him.

“I’ve said this since the beginning; if you give Moyes time, he will make a team. I’ve watched West Ham a few times this season. They’ve become a side that’s difficult to beat.

“If I’m honest, I cried when I found out Moyes lost his job at Manchester United. I thought he was going to stay for a long time.

“It was a sad day. I went to his office to say goodbye, before he said bye to everyone. I told him, ‘Good luck’. But it was a difficult time for me.

“Moyes is a top man, he has a big heart. That’s why maybe he didn’t succeed at Manchester United, because he’s too nice.”

Fellaini remained in Manchester for five more years, winning four trophies while his ex-manager tried to turn his career around with stints at Spanish side Real Sociedad and Sunderland, the poison chalice of the division at that time.

Moyes was initially backed by supporters
(

Sat 18th with just two wins from their opening 11 league games in November 2017, Moyes steered the previously-hapless Irons to safety – only to be let go at the end of the season.

But West Ham chiefs soon saw sense when they sacked his predecessor, Manual Pellegrini, in December 2019.

With unfinished business to attend to in east London, Moyes was reappointed and confidently declared that he would leave his superiors with no choice but to keep him beyond the campaign, again taking the Hammers from the relegation zone to safety.

“What anybody is getting with me is an experienced Premier League manager,” he said upon his second appointment. “Arguably there is only two or three who have got more than me.

“I’ve got the biggest win-rate out of a certain number of managers as well. That’s what I do. I win.”

Moyes returns to Old Trafford with West Ham on Saturday
(

Mocked on social media for his claims, Moyes soon silenced his doubters and during his first full term in charge at the London Stadium, West Ham superbly finished in sixth place to qualify for the Europa League.

Now, almost six years on from his sacking at Old Trafford, his team are sat in fourth and on course to sensationally qualify for the Champions League, while a rudderless United lag behind them.

Into the knockout stages of the Europa, too, Saturday’s result will have no bearing on the fact that David Moyes has find a club where he really is the Chosen One.