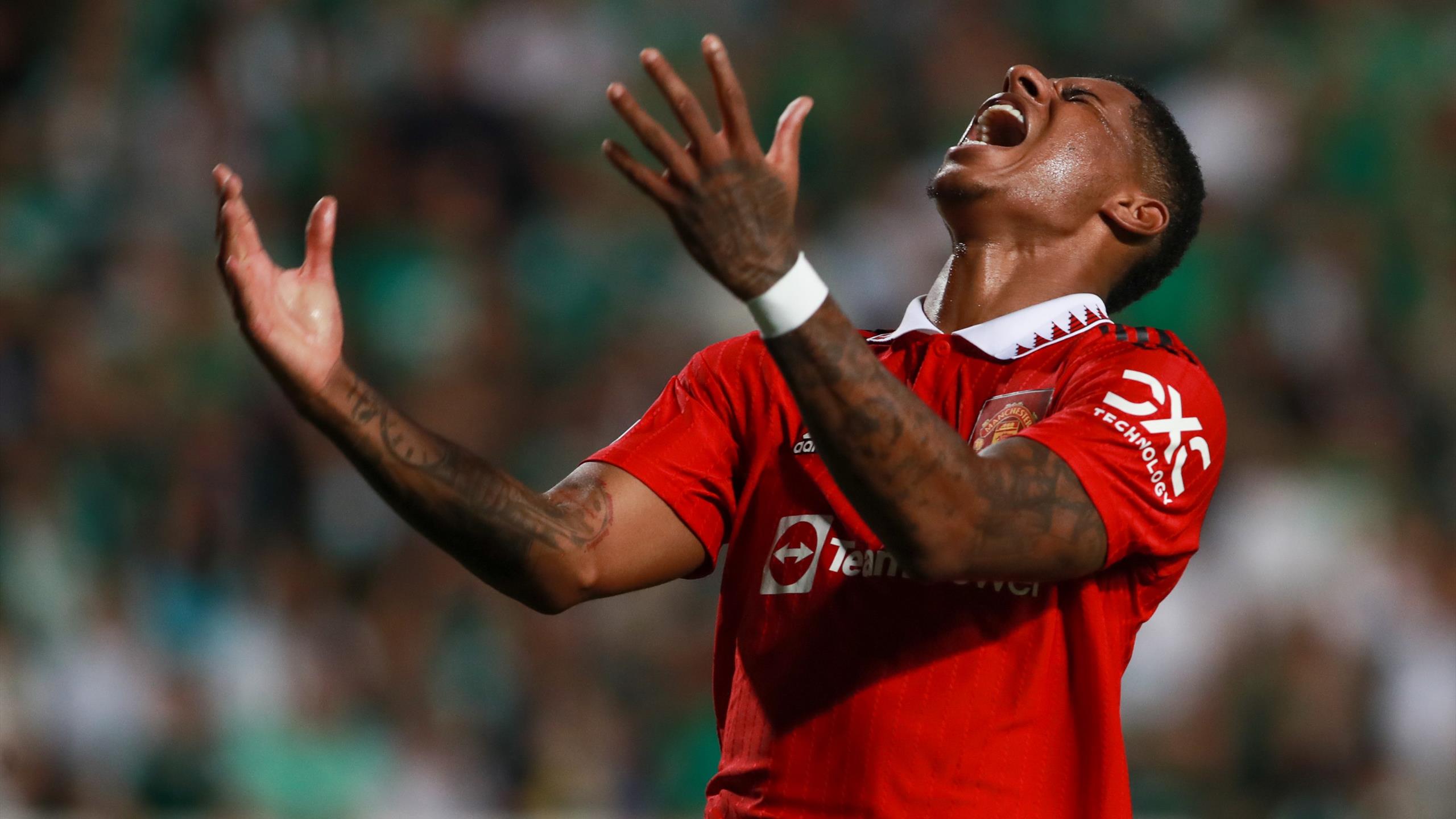 It’s exhausting, watching Manchester United. Everything that happens feels so heavy. When Omonia Nicosia’s forwards caught Tyrell Malacia napping, broke into the United half, and took the lead, it should have just been one of those things… but it’s never just one of those things.

‘Impossible to play against’ – Hargreaves praises Rashford after inspiring comeback

Season after season of underachievement, of chaos, of manager upon manager coming in and going out: it all adds up. Any normal big team conceding an early goal, hey, it happens. They’ll sort things out. With United, you know that they should, but you also wonder if you’re watching the next chapter in the same cycle. You can almost hear the doom coming, just beyond the horizon. The thundering gallop of stampeding hot takes. Once the crisis gets out, it takes a long time – sometimes years and years – to get it back in the stable again.

Last night, against Omonia Nicosia, United did take care of it. Just about. That they did so was due in large part to Marcus Rashford, and that, in turn, is perhaps a sign that Ten Hag is getting somewhere. Last season, Rashford was a hollowed-out shell of himself, a walking talking warning of what can happen to a footballer when the mind is cluttered. Some footballers have the first yard in their head. Rashford seemed to be carrying around the first tackle.

United’s other goal came from Anthony Martial, who now has three goals in zero starts for the season. Pretty good going, even if we allow for the goals against City coming in slightly unusual circumstances. After the game, Ten Hag told the press he had to be “really careful” with Martial’s fitness, following his knock in preseason, but there have been glimmers of just why that care might be worth taking. And if Ten Hag can get both Rashford and Martial back to something like their best – if, indeed, we can finally get on with finding out what their best is – then he’ll already be doing better than all the experiments before him.

It wouldn’t be a major tournament without England, as a team and a nation, sweating and fretting over somebody’s fitness. Yesterday, Manchester City announced that Kyle Walker has had surgery on a groin problem and currently does not have a projected date for return.

Reports suggest that he might still make the World Cup. Whether that’s at full fitness, or whether he’ll be taking the traditional role of half-fit player to be massaged into utility for the knockouts, we wait and see. But if you thought the chat about England’s right-back spot was interesting before now, oh boy. Things are about to get serious, and seriously vexed. Cut two eyeholes in a paper bag, pop it over your head, and give the problem your best Gareth Southgate.

The problem is that, while England have approximately a million right-backs, they’re all very good at different things. Walker’s special power is the fact that he can basically defend an entire half on his own; when he plays as a central defender, on the right of the three, he does all the sprinting that Harry Maguire and John Stones cannot. We still don’t quite know how Thomas Muller didn’t score last summer, but Walker getting back to him might have had something to do with it.

Asking Reece James to do the job seems the obvious solution; he may not have as much experience as Walker in that role, but he does at least have the pace. But that takes one of England’s best players out of his best position, and also it gives Southgate another big choice to make. All together now: “Hey, how about this Trent Alexander-Arnold lad? He seems like he might be quite useful.”

It is best to go into big tournaments prepared. And England, as a nation, has known for some time that The TAA Question will be at the heart of any post-tournament inquest. The takes are prepared, the angles rehearsed, and until now, Southgate’s only hope of avoiding this argument has been bringing the trophy home. And then Walker limped off, and now a nation asks itself: hey, what if we had this argument during the tournament? Would that be more fun?

Leave aside, for the moment, the question of blame, and just consider Declan Rice’s point in isolation. He’s right, right? 68 games in a year is obscene. And with West Ham in Europe – he came on late last night – and a mid-season World Cup, he’s not going to be getting a proper rest until next summer at the earliest.

Unless he breaks something, of course. (That really would screw up Southgate’s plans.) We can bring the question of blame back in here, and spread it around liberally: preseason, midseason, and post-season friendlies; a third cup competition; the Europa Conference Pear; a Premier League that was supposed to drop down to 18 teams at some point but somehow never quite got round to it.

A fun fact. In his four seasons at Barcelona, Neymar played an average of 46.5 games a season. Since moving to PSG, and leaving this current season aside for the moment, he’s averaged 28.8; that’s a drop-off of almost half. That’s not a perfect picture, since it doesn’t include internationals and isn’t calculated in minutes, and some highly inconvenient injuries have played a part. But still. One of the best players in the world makes a colossal move, and all of a sudden he’s playing nearly half as much football. That’s got to have put another couple of years on his career, right?

Anyway, The Warm-Up’s been wondering if, at some point soon, players are going to start asking that their contracts include an upper limit on appearances per season. In two years’ time Kylian Mbappe is going to have the footballing world laid out before him. If he says to Real Madrid: look, in the interests of extending my career for as long as possible, I’m only going to play 40 games a season, Madrid will still come back with “Yes! Please! Anything! Twice anything! Sign!”

Declan Rice doesn’t quite have the same intensity of star power as Mbappe. But still, if he ever decides to leave West Ham, every big club in England is going to be queuing up for him, and he’ll have some leverage to negotiate a hard limit on obscenity. Mere mortals might have a harder time of it: that might take a coordinated effort from the players’ unions. But football increasingly looks like an experiment in seeing just how many games can be squeezed into a finite space, and something’s got to give somewhere. If it isn’t anywhere else, it’ll be the hamstrings.

Goal of yesterday: this beautiful weighted volley from Jess Fishlock, who at this point had played more than 100 minutes of extremely nervous qualifier. (There are people in the comments claiming that this goals comes off the shin. That would make it better. Feet are really good for kicking things. Shins, not so much.)

It’s European champions against world champions tonight, as England’s women take on the USA at Wembley. Or to put it another way, it’s the biggest game possible. To get you in the mood, here’s Anita Asante for the Guardian, frankly confessing that England’s players used to be just a little intimidated by the USWNT.

“When I played against them there was 100% a fear factor. There was such a high level of respect for what they’d achieved as a nation. They were the elite. They were the pioneers. In our game, they were the ones leading the charge and everyone else had to try to catch up and match it.”

But now, she reckons, “the fear factor has gone.” She cites the win in the Euros here, of course, but also points to a culture shift in English football, the move from amatuerism to professionalism. “These players experience pressure and expectation in a way many in past generations, in my generation, didn’t. Now we have an England team that is fully supported in their bid to be complete professionals.”

Tonight’s game has been unfortunately and appallingly been overshadowed by the release of the Yates report, detailing systemic and widespread emotional and sexual abuse within the NWSL. England’s players have extended their solidarity to their opponents, and it’s worth reading Megan Rapinoe’s comments about what needs to be done. “[There needs to be a] signal to players that we’re being heard, and we are being respected and that action is being taken. The [NWSL] was set up in a way that got it off the ground and gave us a place to play and every player would say that we’re thankful and appreciative for that, but it was also done with absolutely zero guard rails and that’s just unacceptable for the future of the league.”

While we’re thinking about Wembley, it’s exactly 22 years since England played their last game at the old place. It rained. England lost. And Kevin Keegan resigned shortly afterwards. We’d remembered it was Didi Hamann that scored the goal, of course; that’s a pub quiz staple. But we’d forgotten just how bad a goal it was to concede.

On the off-chance you don’t fancy watching England vs. the USA, then you’ve got a choice between QPR vs. Reading, Osasuna vs. Valencia or Lyon vs. Toulouse.

Have a great weekend. We’ll be back on Monday.