Champions League action is much coveted in world football and over the past few years, Europe’s elite have strived to ensure their spot in the most prestigious of all club competitions across the continent.

The midweek fixtures pit the biggest of European heavyweights against each other, giving fans in the process, a chance to witness the likes of Liverpool take on Bayern Munich or yesteryear greats Manchester United face off against Inter Milan.

It is fair to say that Champions League football has seen contrasting moments in recent years, be it last-minute winners, VAR drama, or players being given the marching orders off the field for rugby-like tackles.

Liverpool’s majestic comeback in the 2005 final

Few would be of the opinion that the 3-0 to 3-3 comeback displayed by Rafa Benitez’s Reds in the closing 45 minutes of the Champions League finale between AC Milan and Liverpool does not make it to the summit of European club football’s greatest contests.

💫 The miracle of Istanbul 💫#OnThisDay in 2005, one of the greatest ever comebacks…#WeAreLiverpool pic.twitter.com/0lPEB2zack

The Merseysiders come back from a three-goal deficit on the back of a Steven Gerrard-led resurgence to clinch their sixth title after a tense penalty shootout went their way, terming the match the ‘Miracle of Istanbul’.

Robert Lewandowski announces himself on the big stage

The now Bayern Munich talisman was a relatively unknown figure in European circles back when he was turning out for Jurgen Klopp’s highly-rated Borussia Dortmund outfit.

On this day in 2013, Robert Lewandowski announced himself on the big stage by scoring 4 goals against Real Madrid and booking Borussia Dortmund a place in the Champions League final. pic.twitter.com/fOMDtiM37J

A semi-final clash against record holders Real Madrid set the perfect stage for the Polish striker to display his worth and talents with a four-goal haul from the then Dortmund man sealing the tie in favour of the Bundesliga side.

A first-leg deficit of 4-0 was against Luis Enrique’s Catalan giants but Lionel Messi and Neymar had other plans for their Parisian opponents with the South American pairing exhibiting a world-class display of attacking football to clinch the Round of 16 tie courtesy of a unlikely Sergi Roberto thumping home the winner in the 95th minute of the Camp Nou showdown.

On 8 March last year, one of the biggest comebacks in football happened: La Remontada.

Ajax’s fairytale run masterminded by a brilliant bunch of wonderkids

Erik ten Hag’s inexperienced yet talented bunch of prodigies in the Ajax setup, which included the likes of Frenkie de Jong and Matthijs de Ligt, were on course to seal their spot in the 2018-19 UEFA Champions League final only for Tottenham Hotspur to knock them out with the last kick of the game in the semi-finals.

Despite the tearful ending, the heavily tipped underdogs ensured their place in European football history through a series of brilliant showings across that campaign.

Since getting their hands on the Champions League trophy in the memorable 2002 finale (the one where Zinedine Zidane scored a sensational volley), Real Madrid had to wait for another 12 years to achieve the long-lasting dream of La Décima which is ten European cups in their kitty.

A closely fought contest against local rivals Atletico Madrid saw Carlo Ancelotti’s men edge out the opposition as the match went to extra-time.

The Blues star centre-back and skipper stepped up to take the spot-kick in what was increasingly becoming a much tense penalty shootout against fellow Premier League giants Manchester United. 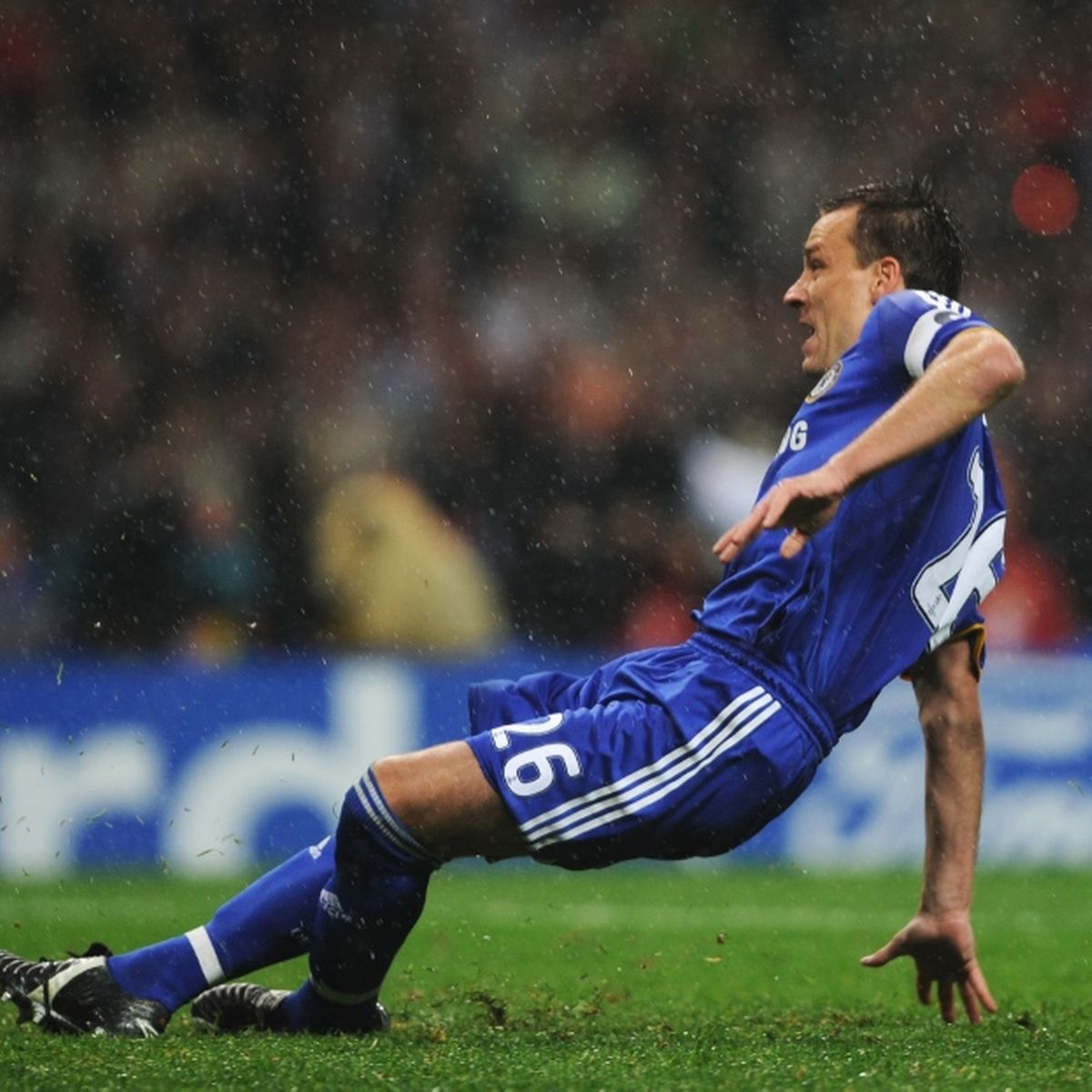 Having gone on the frontfoot after United’s Cristiano Ronaldo had missed his effort on goal, Terry could only have his strike come off the post as the Chelsea captain slipped while connecting with the ball.

Van Persie, then the attacking stalwart for the Gunners, was given the marching orders by referee Massimo Busacca, as the Dutchman was adjudged to have wasted time despite him being unaware of the same.

His sending off played a major role in FC Barcelona grabbing the tie in their favour and proceeding to the last-eight of the 2010-11 Champions League which was eventually won by the Catalan outfit.

Real Madrid suffer shock humiliation on their travels to Anfield

The Spanish side were tipped to the favourites on their visit to Merseyside as they faced off against Rafa Benitez’s Liverpool outfit that consisted of the starry likes of Steven Gerrard and Fernando Torres.

What occurred that night was immensely spectacular for the hosts and not so much for the travelling party as the Reds shipped four goals past a toothless Real Madrid XI to notch up a momentum European night at Anfield.

A group stage fixture in 1997 saw Dynamo Kyiv under the charge of Valeriy Lobanovskiy emerge as the unlikeliest of victors over a star-studded FC Barcelona side that boasted of Luis Figo and Rivaldo amongst its ranks.

A 4-0 scoreline was enjoyed by the Ukranian club at the expense of their Spanish counterparts who had to witness the then up and coming local talent Andriy Shevchenko deliver a masterclass in front of the goal.

Heading into the Anfield contest on the back of a 3-0 in the first leg, Ernesto Valverde’s FC Barcelona side suffered abject misery when taking on an inspired Reds who were missing star forwards Salah and Firmino.

With the aggregate scoreline at 3-3 and ten minutes left to play for, the Spanish side were caught out in the most embarassing of manners by Trent Alexander-Arnold’s short corner which was slotted into the back of the net by Divock Origi.

Who saw this coming? #UCL pic.twitter.com/KcYIrxpkoR

Valverde’s men crashed out of the Champions League last four, adding to further troubles for the embattled boss in what was another humiliation in continental football for the second year running.

The Chelsea No.11 got involved in a confrontation with referee Tom Henning Ovrebo after the semi-final clash was won by FC Barcelona on away goals.

Drobga’s confrontation got heated very quickly and ended in the Ivorian hurling a flurry of expletives at the TV cameras ensuring a six-game ban for the Blues star striker by UEFA.

The La Liga giants endured misery yet again in Champions League knockout stages, this time coming at the hands of title favourites Bayern Munich, who scored as many as eight goals in the Camp Nou meeting between the two sides in August 2020.

This utterly humiliating loss for Messi and Co fast-tracked Quique Setién’s departure from the managerial post leading to his sacking three days later as FC Barcelona suffered their heaviest defeat in 69 years, calling for changes to made at the club in the most urgent of manners.

Frank Ribery and Arjen Robben come to blows over free-kick

The ever-brilliant Bayern Munich attacking duo notoroisly had a falling out with each other over who would take the free-kick as the German side took on Real Madrid in the 2012 Champions League semi-final. 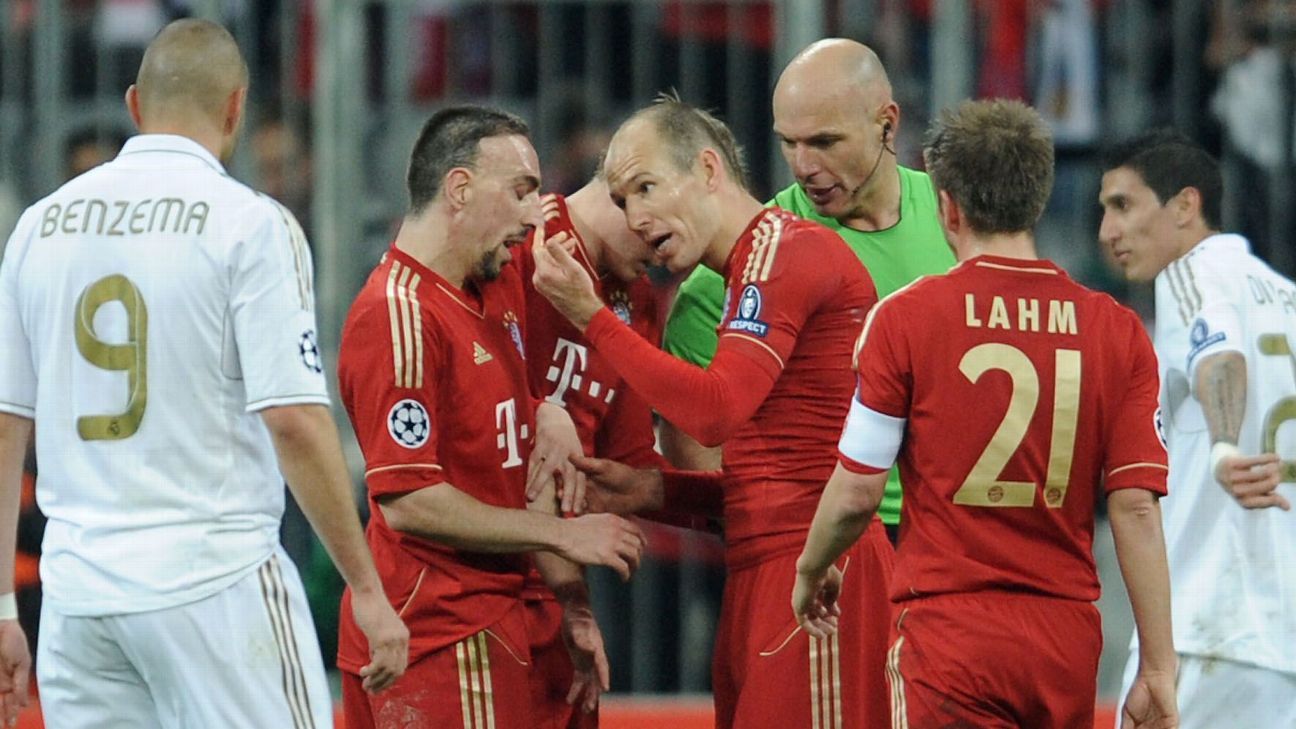 Ribery was believed to have punched his fellow winger as the argument turned heated, but the duo resolved the matter quickly in the aftermath of the game.

The Special One, detested by the Juventus fanbase from his days as the Inter Milan gaffer, wasted no time in celebrating in front of them after 90 minutes of insults directed towards him with Mourinho’s United side emerging victors in a 2-1 contest back in 2018.

Juventus players Paulo Dybala and Leonardo Bonucci were quick to confront the former Chelsea boss over his as Mourinho was escorted down the tunnel in Turin.

The then Liverpool No.1 endured a horrific showing between the sticks for Liverpool as Jurgen Klopp’s side took on Zinedine Zidane’s Real Madrid in the 2017-18 Champions League final in Kiev.

Haven’t really slept until now… the scenes are still running through my head again and again… I’m infinitely sorry to my teammates, for you fans, and for all the staff. I know that I messed it up with the two mistakes and let you all down… pic.twitter.com/w9GixPiQDC

Karius rolled the ball in Karim Benzema’s path to allow the Frenchman to score from point blank range and misjudged Gareth Bale’s long-range effort in a game that finished 3-1 in favour of the Spanish outfit.

Karius never started another game for Liverpool post this drama as Klopp was quick to bring in Alisson Becker in the following summer window to fortify his goalkeeping spot.