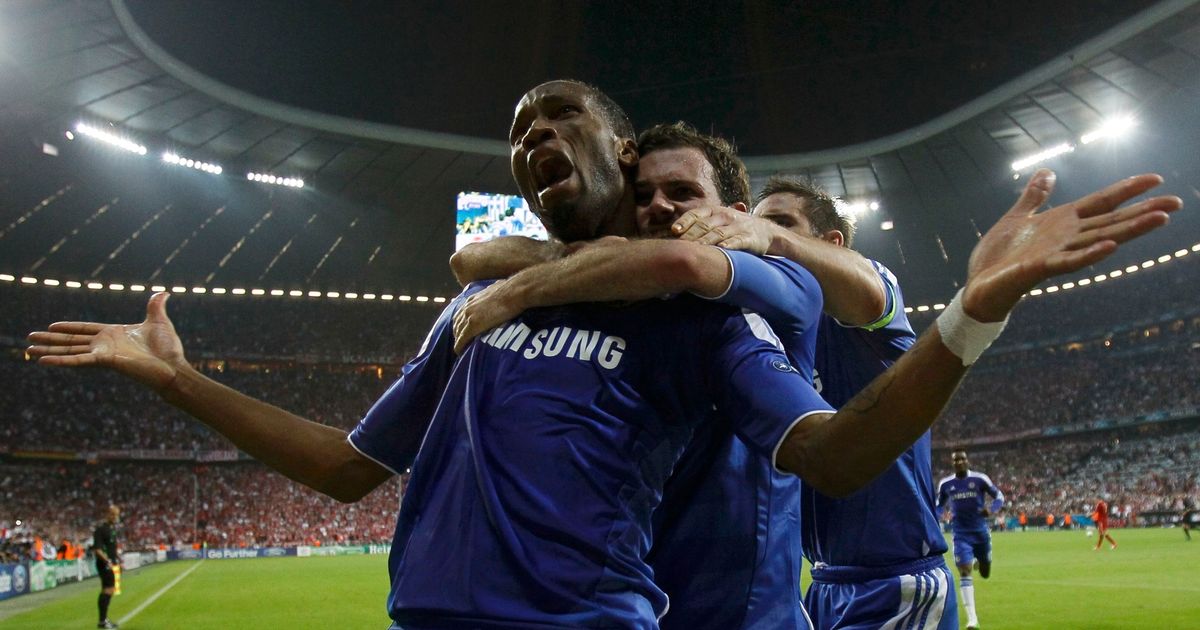 ON THIS DAY in 2012: Chelsea won the club’s first ever Champions League trophy against all the odds, as a late equaliser and then subsequent penalty winner from Didier Drogba beat Bayern Munich in their own back yard

Juan Mata had some sage words of advice for Didier Drogba (

Wave after wave of Bayern Munich attacks have finally borne fruit for the then five times European champions, who had everything in order to make it six.

Bayern were, of course, at home. The Allianz Arena was still hosting thousands of Chelsea supporters, but there was no doubt over just who was ruling this particular roost.

As the first team to enjoy home advantage in a European Cup/ Champions League final since Roma in 1984, Bayern were eager to get the party started. All that had been missing was a goal, and then when Thomas Muller duly provided one with seven minutes left it was almost a box-ticking exercise. Now for the celebrations.

Drogba wouldn’t have been the only Chelsea figure welling up at that point, but neither he nor anyone else in blue would have viewed the Bayern goal as a surprise.

The hosts had dominated on the night, and this Chelsea side playing in the club’s second Champions League final didn’t look anywhere near as dangerous as the first, the team that lost on penalties to Manchester United in Moscow four years previously.

Drogba was in that side, and at that precise moment in Munich, Moscow was on his mind.

“We had been chasing this trophy for eight years and couldn’t do better than runner-up,” Drogba would say at anniversary event years later.

“Everyone agreed to put egos aside and challenge each other for the same goal.”

As Drogba admitted, those egos had been pretty rampant earlier in the season, a campaign which had seen the bright new hope Andre Villas-Boas relegated to a busted flush within a matter of months. From the new Jose Mourinho to just another Chelsea manager.

Chelsea were up against in it Munich before their glorious victory
(

In came Roberto Di Matteo with his friendly face, legendary Chelsea status and an arm around the shoulder of a group of senior players who were enormously talented, just seemingly a little put out by Villas-Boas’ ways.

Di Matteo’s remit was to see Chelsea through until the end of the season, but he inspired a remarkable show of defiance, with Napoli beaten in the quarter-finals and then Barcelona in the last four. The FA Cup had also been won prior to Munich, and Drogba was hopeful that the post-AVB turnaround masterminded by key players both old and young would bear fruit.

“I asked a young 23-year-old Juan Mata, ‘Please maestro, help me win the Champions League,’” he recalled from a now infamous team meeting where he singled out one of the club’s most talented young players.

“He looked at me like, ‘Man you’re crazy, you’re Didier Drogba, you are gonna help me win it.’

“I then told him, ‘I’ve been here for eight years and never won it so I believe you’re the one who’s gonna help us win. I’ll even give you a present if we win it.’”

That present looked a long way off when Muller scored though.

“On my way to kick the ball for the last eight minutes I was so discouraged,” continued Drogba.

“The young man [Mata] said to me, ‘Believe Didi, you have to believe.’

“Almost in tears I answered after looking at the time, ‘Believe in what? It’s almost over, I’m gonna cry like a few months ago when I lost the [AFCON] final with Ivory Coast.’

“Last minute, last corner, I mean first corner for us against 18 for Bayern Munich.

“Guess who took that corner kick? Juan Mata. And the rest is history.”

“Bastian Schweinsteiger marked me at the corner,” David Luiz would say years later, “and I said ‘No problem, it’s not me who will score.’ And Didier did. Schweini looked at me as if to say, ‘what the f***?”

That expression was initially replicated on German faces around the ground as a celebration was denied, but then it appeared on Drogba’s when he gave away a penalty in extra-time for a foul on Franck Ribery. The tears may well have been on the verge of flowing again but for Petr Cech’s save from Arjen Robben, the Dutchman having taken the penalty following the chilling prediction of “you’re gonna miss” whispered into his ear by Mikel John Obi seconds earlier.

The Nigerian did more than that on the night, of course.

Mikel’s display at the base of midfield has long passed into Chelsea folklore, with his relentless breaking up of play and recycling the ball proving crucial to his side’s rearguard action.

There were other unlikely heroes too, with a 22-year-old Ryan Bertrand doing a fine job on the left of midfield and the often derided Salomon Kalou working hard on the right.

It was the familiar figures of Cech and Drogba who would ultimately get the job done though.

Cech proved to be the hero in the penalty shootout
(

“When it came to penalties, we’d actually done as much preparation as was possible,” Cech told The Athletic when recalling the game.

“All the goalkeepers on the staff had taken time to watch the DVD – Ross [Turnbull], Jamal [Blackman], Henrique [Hilario] and [the goalkeeping coach] Christophe Lollichon – and taken notes before discussing it in a meeting. Before we’d started the shoot-out, I’d said to them, ‘So, guys. Where are the notes?’ But Hilario told me not to worry, and that I’d save everything.

“Neuer’s I wasn’t expecting. His was the only one I had no idea about…”

Drogba scored the clincher from the spot
(

Yep, it was Manuel Neuer who stepped up to score Bayern’s third kick in the shootout, putting them 3-1 ahead and seemingly on course for glory in front of expectant fans. But Bayern wouldn’t score another penalty, and Chelsea would score three.

Cech’s saves from Ivica Olic and Schweinsteiger set the stage for Drogba, who tucked his shot into the corner to start the party that never looked like happening.

Then the tears could flow for real, but they were of a different kind.