Espanyol vs Barcelona: Luuk de Jong rescues a point for Barcelona at Espanyol in the Catalan derby 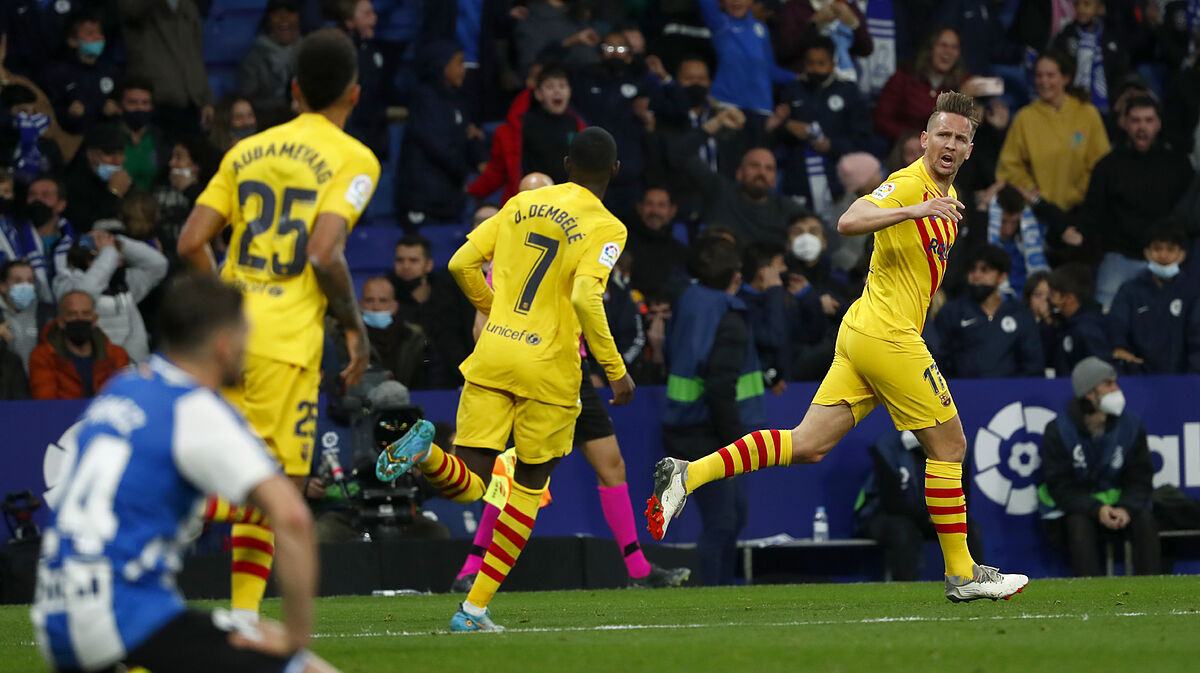 Espanyol‘s wait for their first win this calendar year goes on after Barcelona scored a 96th-minute equaliser through Luuk de Jong to rescue a point in a 2-2 draw at the RCDE Stadium on Sunday night.

The game got off to a terrible start for Espanyol as Pedri gave Barcelona the lead after just two minutes, but Sergi Darder equalised with an excellent goal in the 40th minute before Raul de Tomas scored what appeared to be the winning goal in the 64th minute. However, Luuk de Jong then popped up and scored a header with almost the last kick of the game to break the hearts of Espanyol‘s supporters.

Barcelona must have felt like this game was going to be a breeze at the beginning, as they scored from their first attack. Jordi Alba got forward from left-back and sent a cross towards the back post for Pedri, who was all alone and saw his outstretched effort kiss the post before going in.

Yet, there was an immediate response from Espanyol, with Vicente Moreno‘s side showing more intensity in their play and making things more difficult for their arch rivals.

Eventually, it was a moment of brilliance from Sergi Darder five minutes before half time that saw Espanyol draw level. Raul de Tomas excellently brought the ball down and then laid it off for Darder, who took a touch to his right before sending his shot into the far corner of Marc-Andre ter Stegen‘s goal. Suddenly, the RCDE Stadium was rocking.

The half-time break saw Ronald Araujo have to be withdrawn by Barcelona, following a couple of hard tackles by Yangel Herrera and Keidi Bare in the first half, so Eric Garcia came on in his place. The Catalan centre-back would then go on to have an awful second half.

Whatever Xavi Hernandez said at half time seemed to work a treat for Barcelona, though, as they immediately began to create more danger in the Espanyol half. Then, in the 57th minute, they thought they had retaken the lead.

Jordi Alba‘s shot from the edge of the area was not cleared by the Espanyol defence, with the loose ball being latched onto in the box by Gavi, who made no mistake in firing past Diego Lopez. But, the goal was disallowed as the ball ricocheted off the offside Frenkie de Jong prior to Gavi getting to it.

Seven minutes later, Espanyol took the lead. Darder received the ball in midfield and used his impressive football IQ to quickly look up and play a ball over the top of Eric Garcia for Raul de Tomas, who found himself one-on-one with Ter Stegen and showed great composure to finish past the German goalkeeper.

It was a case of Espanyol battening down the hatches in the latter stages of the match, but the drama that unfolded in second-half stoppage time will be spoken about for many years to come.

First, Nico Melamed and Gerard Pique had a coming together which resulted in both players getting sent off, and then with what was basically the last kick of the game, Luuk de Jong headed in Adama Traore‘s cross to rescue a point for Barcelona.

This point means that Barcelona remain in fourth place, while Espanyol stay in 13th.