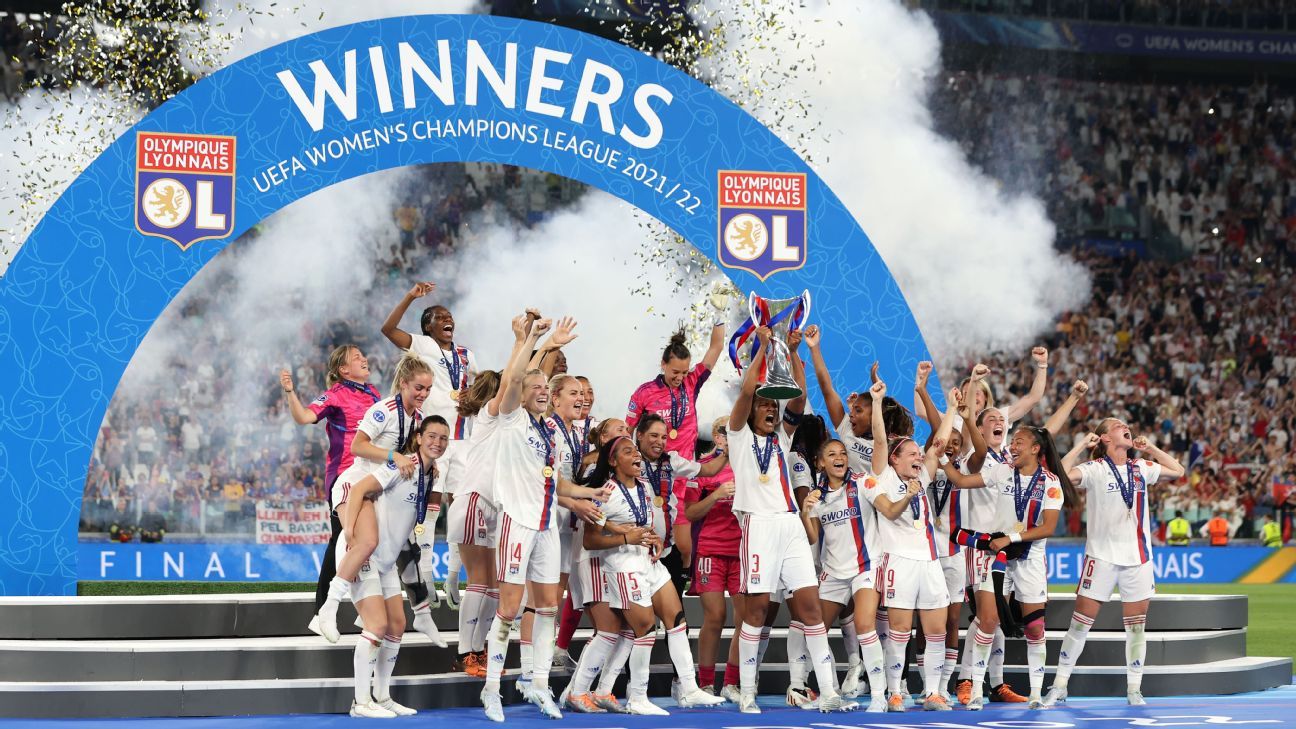 Lyon beat Barcelona 3-1 in Turin on Saturday to win the UEFA Women’s Champions League for the eighth time and reclaim their crown as the queens of Europe.

Amandine Henry, Ada Hegerberg and Catarina Macario all netted within the opening 33 minutes to leave reigning champions Barcelona with a mountain to climb.

Macario’s goal made her the first USWNT player in history to score in a Champions League final.

Barca pulled one back through Alexia Putellas before the break, but despite throwing everything at Lyon in the second half they could not find a way to beat the French side for the first time in their history.

“Well you can probably see it in my face. I’ve been dreaming of it since I was a little girl watching the men’s Champions League… It is everything,” Lyon’s Lindsey Horan told DAZN after the game.

It’s the sixth time in seven years Lyon have won the competition, and in beating Barca, who hammered Chelsea in last year’s final, they reasserted themselves as the dominant force in European football.

The next challenge is to wrestle back the league title in France after missing out to Paris Saint-Germain last season. They will do that if they beat PSG in their next match.

For Barca, despite the defeat, they can still reflect on another historic season, with the Spanish Supercopa already won and a perfect campaign completed in the Primera Division with 30 wins from 30 games. They face Real Madrid in the Copa de la Reina semifinal next week.

But the loss to Lyon will hurt and revealed they are not yet ready to be proclaimed as the best in the game just yet, even after winning a Treble last season and recently seeing a 45-game winning run to an end.

The last time these two sides met was in the 2019 Champions League final when Lyon blew a more inexperienced Barcelona side away with four goals in the opening half hour. It was a match Barca players say represented a before and after moment and showed just how much harder they had to work.

It was supposed to be different this time, with Barca growing on the back that defeat three years ago to win the competition last year, but the French side started strongly once again at the Allianz Stadium.

Henry opened the scoring in the sixth minute with a stunning strike from distance to set the tone for a one-sided first half.

As Barca sought an equaliser, though, the gaps at the back got bigger and they found themselves 2-0 down in the 23rd minute when Hegerberg headed home to become the first player since Real Madrid legend Alfredo di Stefano to score in four Champions League finals.

Hegerberg, the former world player of the year who is finally returning to her best after a long-term injury, then started to terrorise Barca. She missed two chances to double her tally before turning provider, taking advantage of some sloppy defending to tee up US international Macario to tap home her ninth goal in Europe this season.

Barca pulled themselves back into the game just before the break. Ballon d’Or winner Putellas timed her run perfectly to turn home Caroline Graham Hansen’s cross to give the Catalans hope going into the second half. It was her 11th goal in the tournament this season.

The early stages of the second half were much more even, with Barca better in possession and stronger at the back. Patri Guijarro was inches away from a goal of the season contender, but her strike from all of 50 yards hit the bar with Lyon goalkeeper Christiane Endler beaten.

Asisat Oshoala, Lieke Martens and Claudia Pina were all introduced as Barca chased the game and Oshoala created a great chance late on for Ana-Maria Crnogorcevic, who drove wide.

As Lyon began to tire, with players cramping up, Barca sensed a way back into the game. But for all of the ball they had in the final third, they rarely troubled Endler, as Lyon held on to dethrone their opponents.