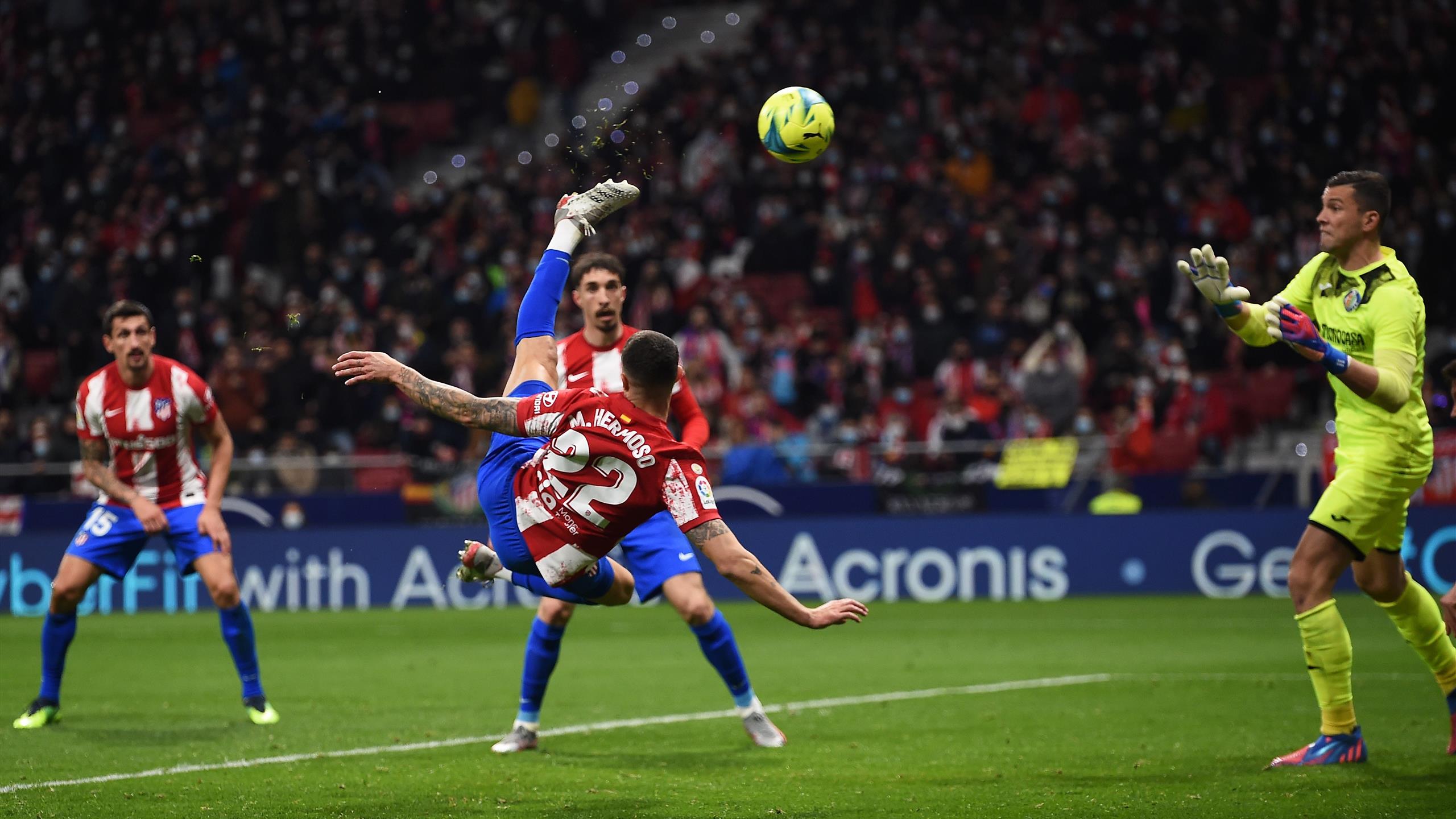 Atleti surrendered a two-goal lead in a first half which ended at three-apiece, and seemingly were hanging on for a draw before the substitute acrobatically volleyed home from close range.

The hosts dominated the early play and despite Luis Suarez seeing a penalty saved by David Soria, they took a two-goal lead through close-range strikes from Angel Correa and Matheus Cunha.

Alves sent off as Barcelona beat Atletico to go fourth

Getafe pulled a goal back on the half-hour mark when Borja Mayoral diverted home Jakub Jankto’s errant shot and then took the lead through two penalties given for handballs against Stefan Savic and Tomas Lemar respectively.

Enes Unal converted the spot kicks placing both to the goalkeeper’s left with Jan Oblak diving to the right on each occasion.

The hosts pulled level when Correa turned home Lemar’s cross at the back post in injury time of a chaotic first half.

The second stanza saw far less goalmouth action but was livened up by a dismissal when Felipe’s high boot caught Mayoral.

After this point Atleti channelled their old defensive resilience before snatching a dramatic victory with time running out.

Atletico and United are car crashes with a difference – It is a fascinating prospect Atletico Madrid and Manchester United meeting in the Champion’s League last-16 as two giants with a very dishevelled look. The big chasm between the two is in the entertainment they provide however.

With Atletico you have one certainty: goals. For the first time since Diego Simeone took over they are shipping them in at an alarming rate (seventh most in la Liga). At the other end of the glut of talent they have in the attacking third has meant even with their Argentine boss’ applying a handbrake they have scored the second most in Spain.

As dull as Manchester United have been, surely Atletico can make their knockout clash box office worthy when Ralf Rangnick’s side travel to teh Wanda Metropolitano on Wednesday week.

Borja Mayoral (Getafe) – A difficult call in a game with plenty of action, especially in the first half, but not always blessed with quality. Mayoral was the player who stood up when they went two down and looked a threat throughout the game. He also felt the brunt of Felipe’s big boot, giving the visitors an advantage they should have made more of.

7′ PENALTY! Lemar plays the ball into the area and Suarez gets the wrong side of Mitrovic and buys a penalty by kicking the ball softly past the goalkeeper then running into him.

9′ PENALTY SAVE! A great stop by Soria diving to his right to deny Suarez, he then also paws the rebound away.

20 GOAL FOR ATLETICO! Correa puts Atletico in front. Getafe are crowding the referee complaining about an earlier foul. Suarez heads back a cross and Djene inadvertently heads the ball into Correa’s path and the forward slams the ball home from six yards. Getafe feel Cunha pushed Djene as he was going for the header.

27′GOAL FOR ATLETICO! Cunha scores from close range. Llorente crossed from the right and Lemar got a touch on the ball in the middle but the shot was going wide before Cuhna’s late interjection at the back post.

30′GOAL FOR GETAFE! Atletico half-clear a cross and Jankto’s skewed shot is met at the back post by Mayoral who slides to divert the ball home.

36′ PENALTY FOR GETAFE! The ball is handled by Cunha and Getafe have the chance to get level. It was a bit harsh, deflected before him and then from thigh to hand while jumping in the air.

37′ GOAL FOR GETAFE! Unal sends Oblak the wrong way from the penalty spot.

41′ PENALTY! The referee gives a handball against Lemar and initially gives a free kick but it looks inside the box. Now the referee has given a spot kick.

42′GOAL FOR GETAFE! Unal puts it in the same corner and Oblak goes the wrong way again.

45+4′ GOAL FOR ATLETICO! Correa nods the ball home at the back post after Lemar’s dangerous cross from the left evades all in the centre.

58′ FELIPE SENT OFF! He clattered into Mayoral with a high boot after the Getafe player nodded the ball past him.

89′ GOAL FOR ATLETICO! De Paul swings in a free kick from the right flank and Joao Felix heads back across the box. Hermoso initially miskicks and then acrobatically leaps at the loose ball to turn it home.

12 – Suarez scored 12 penalty kicks in five years before missing this one.