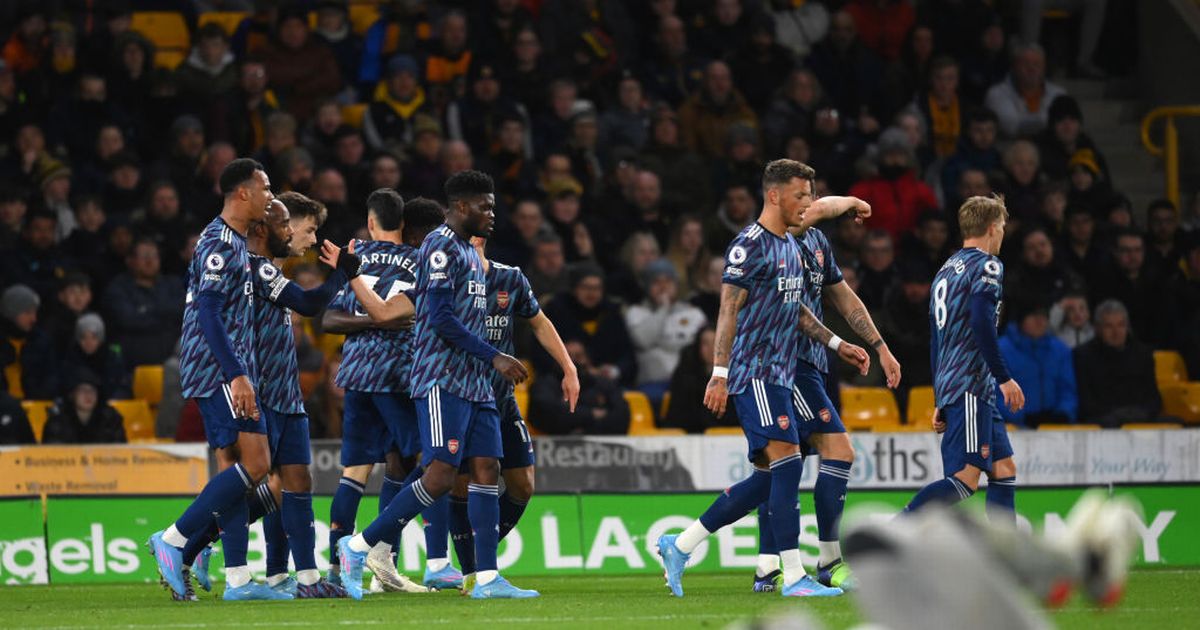 Arsenal earned three valuable points in their push for a top four finish as they ground out a 1-0 win over Wolves at Molineux, despite ending the game with ten men

Arsenal leapfrogged Manchester United to move to fifth in the Premier League table with a 1-0 victory over top six rivals Wolves.

A first half strike from Gabriel was enough to earn all three points for Arsenal, who had to withstand late pressure following Gabriel Martinelli’s red card.

In contrast to the crackling Molineux atmosphere, it was a relatively quiet start to proceedings with neither side able to fashion much in the way of early chances.

But it was the Gunners who took the lead when Gabriel poked home a scrappy opener after Ben White won the second ball from a corner.

The hosts had half chances through Raul Jimenez and Nelson Semedo, but Arsenal went into the break with their slender lead intact.

Martinelli then handed Wolves a route back into the game when he was sent off in unique circumstances.

After initially pushing Daniel Podence over whilst trying to take a quick throw, in the same move, he fouled Chiquinho, with referee Michael Oliver adjudging both offences deserved a yellow.

From the resulting free kick, Wolves had a goal correctly ruled out for offside, before Alexandre Lacazette missed a gilt-edged chance to double the score.

It was then a case of backs against the wall for Arsenal, having to endure wave after wave of Wolves attacks, but they survived moving above the Red Devils on goal difference and just one point behind West Ham, having played two games fewer.

Here are the big talking points from the Black Country:

The duck is finally broken

It only took 40 days, four-and-a-half matches and two cup exits, but Arsenal were finally able to celebrate a goal again.

They say good things come to those who wait and while Gabriel’s tap-in won’t win any goal of the month competitions, in the packed out away end, it was certainly greeted one.

In a way, it was a very un-Arsenal type of goal, with White climbing highest to recycle the ball, Alexandre Lacazette putting his body on the line to take Josa Sa out of the game, allowing Gabriel to poke home the easiest of goals.

Laca leading from the front

He certainly isn’t prolific, but the workrate Lacazette gets through at the top end of pitch is continuing to prove invaluable to his side.

The Frenchman constantly showed for the ball and was always an option for his team-mates.

In the first game after being officially confirmed as skipper, Lacazette put in a real captain’s performance defending from the front and setting an example to his younger colleagues.

Uncertainty over Lacazette’s contractual situation must be becoming a real concern for Arteta, who will be desperate to cling on to the leaders that do still remain at the club.

Martinelli was sent off by referee Michael Oliver
(

Up until tonight, Wolves had arguably been awarded the strangest red card of the season when Raul Jimenez was booked for two incidents in a matter of seconds.

But Martinelli’s was even more unique than that. There is no question that both incidents when isolated were cast-iron yellow cards.

Perhaps he didn’t think he would be booked for his petulant push on Podence, but the referee applied the law correctly to hand Wolves a potential route into the game.

And it was yet another example of mindless ill-discipline from Arteta’s side. No team have had more players sent off since his appointment and it continues to hamstring their push to be true Premier League title competitors.

A tale of two Barcelona exits

Both sides came into this having had eerily similar January transfer windows.

With the two on the peripheries on the top four, both sets of fans felt that with a bit of investment, they would be well set for a real tilt in the second half season.

And Arsenal and Wolves both sanctioned sales of attacking players to Barcelona which divided the fanbase.

However, while the Gunners have plenty of options in absence of Pierre-Emerick Aubameyang, Wolves really looked to be missing the explosiveness of Adama Traore.

Bukayo Saka and Gabriel Martinelli have both shown they can carry the attack, whilst Francisco Trincao still looks to be adapting to English football.

The battle of the keepers

Before kick-off this was billed as two of the smartest summer transfers going head-to-head.

In Aaron Ramsdale and Jose Sa, Arsenal and Wolves have enjoyed serious upgrades in between the stick, with both recognised as amongst the league’s best so far this season.

Ramsdale earned yet another clean sheet in goal for Arsenal

But it was Ramsdale that will go home much the happier having earned another clean sheet in the face of relentless Wolves pressure.

Sa will be disappointed for the part he played in the only goal of the game, unable to get to Ben White’s header before Lacazette.

Whereas Ramsdale was equal to everything asked of him, with Bruno Lage’s men throwing cross after cross into the box in the closing minutes.