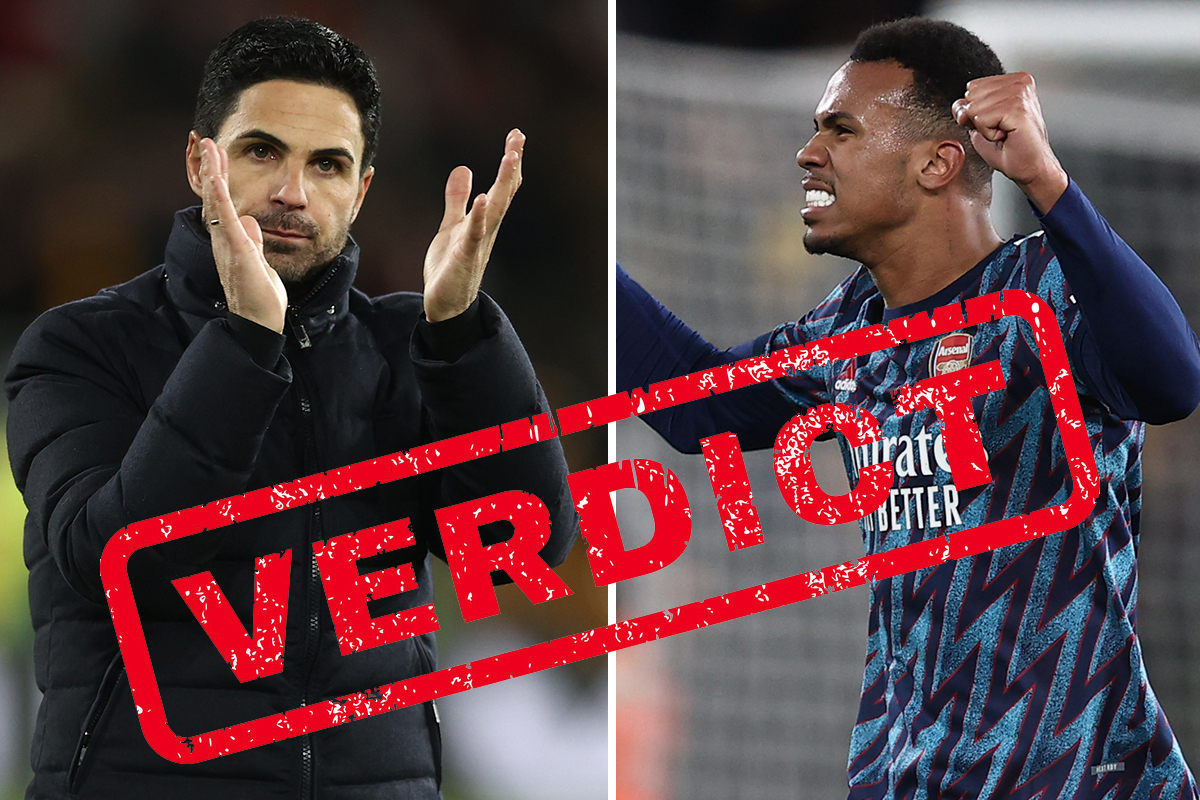 ARSENAL are in pole position for fourth – despite not spending a penny.

Their hard-fought 1-0 victory over Wolves propels them up to fifth, having played two games fewer than West Ham above them.

And they had to dig deep for the win after Gabriel Martinelli’s foolish double-yellow sent them down to 10 men.

All the talk in January was of Mikel Arteta’s failure to bring in a striker.

As the transfer window slammed shut, the Gunners boss ended up keeping his chequebook in his pocket.

But on the evidence of tonight’s victory over Wolves, that looks like a great bit of business.

The travelling fans were understandably worried as they headed north to Molineux.

Their side had failed to score in four in a row – their worst record in 16 years.

And with goal-shy Alexandre Lacazette now all that’s left to lead the line this term, many were asking where the goals would come from.

Well who needs a striker when you have a centre-back like Gabriel?

The towering Brazilian produced a poacher’s finish when he pounced on a loose ball inside the six-yard box.

Lacazette had made a nuisance of himself to keep a Martinelli corner out of Wolves keeper Jose Sa’s hands.

But it was the defender who put himself in the right place at the right time to break Arsenal’s duck.

Remarkably, it was the first time Wolves had conceded from a corner in the top flight this season.

In fact, the hosts came into the fixture with the second-best defensive record in the league.

And so tight is the competition for Champions League places that Bruno Lage’s men still have an outside chance of finishing inside the top four – despite being down in eighth.

But with Arteta’s men back up to what was almost their full-strength XI, the visitors had just enough to cling on for three points.

That is not to say Arsenal’s full-strength squad were all playing at full strength.

Thomas Partey and Granit Xhaka made welcome returns to the line-up following their respective bans.

But both at times looked well off the pace on a chilly evening.

Xhaka in particular appeared to be working on securing his next ban when he grabbed a handful of Trincao’s shirt.

But it was Martinelli’s petulance that put the Gunners under pressure when he was given his marching orders for shoves on Daniel Podence and Chiquinho.

Arsenal as a team have not played since 23rd January and their bore draw against Burnley.

Tonight they gave their fans something to shout about – even without a striker and all XI men on the pitch.