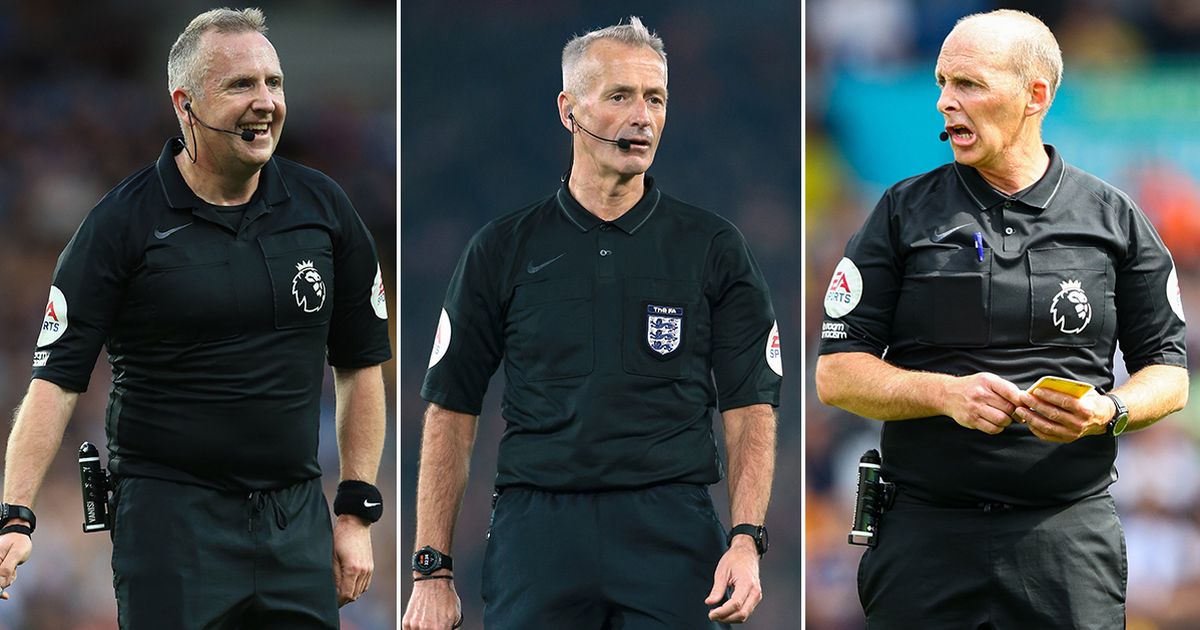 Mike Dean, Jon Moss and Martin Atkinson will call their final Premier League matches this season. The legacies they leave are controversial. But they are legacies.

As if the drama levels of this weekend’s Premier League finale needed any more stoking, Mike Dean, Martin Atkinson and Jon Moss are hanging up their whistles after the final round of games.

Whether you feel obliged to shed a tear for the men in the middle or gleefully dance a little jig is a matter of personal vendettas. Odds are, one of these men has served up at least one cold dish of card cruelty to your team.

Nevertheless, upon the veteran trio’s imminent last dances, we briefly bid them a proper adieu. For all the carnage, there will always be the memories. Good and bad. Such is life.

Which referee will you miss the most? Have your say in the comment section and survey below.

Where will football be without Mike Dean, the man who has remarkably made flourishing colour-coded cards to teeth-seething grown men an artform since his debut in 2000?

And it is a flourish. “Deano” does not merely hand or dish out cards. One cannot use such simple forms of issuing when it comes to the parking-attendant-level zeal with which Mike Dean has presented an unprecedented 114 red cards, 2,026 yellow cards and 184 penalties in 559 matches (and, almost inconceivably, still counting). It is wrist-flicks, no-looks and finger-wag flourishing only.

At times, you have to wonder if the honour of holding the dubious reputation of football’s (arguably sport’s) egomaniac referee ever grates old Deano, but the 53-year-old has seemingly taken the position and carved a gilded crown out of it.

In one sense, you have to give a man credit for managing without erring to seize the spotlight upon a stage in which those in his position generally try to fly as inconspicuous as possible. The grind is impressive, entertaining even. Football’s equivalent to the dancing air traffic controller.

Nobody has ever done it quite like Mike Dean
(

Did you appreciate Mike Dean’s showmanship? Have your say in the comments below.

That is, for a neutral of course. Once Mike Dean has Mike Dean-ed your team, it is remarkably difficult to savour his antics.

Oh but how iconic they are. Who can forget him ripping John Terry for touching his cards? Or losing his consummate nut over Tranmere Rovers? Or off-you-pop -ing Lewis Dunk? Or admitting that, yes, he was celebrating when Mousa Dembele scored against Aston Villa, but he was celebrating his pristine governance as referee-extraordinaire rather than the markedly impressive effort from the Spurs attacker, a brilliant case of Dean out-Deaning himself?

To twist an old adage, you do not become a legend without spoiling a few people’s fun. Those who have felt the brunt of his controversies might argue his 22-year career was a matter of more than a few and some fun, but this is Mike Dean we’re talking about.

The nonconformist pantomime villain of the referee world. A reliable source of ire. Irreplaceable and irreplicable. Thank goodness.

When Steven Gerrard recently voiced absolutely zero remorse upon being told Jon Moss would be retiring at the end of this season, it is not difficult to imagine that a large fraction of football fans shared the sentiment.

Moss doesn’t deal in Dean-level flamboyance, albeit embroidering “Mossy” on his Lotto boots certainly feels like a page ripped out of the Dean handbook, but that hasn’t kept Moss from whipping up some notable controversy with 39 red cards and 892 yellows in 274 games and counting.

Moss will arguably be remembered least fondly for the 2016 season. A refresher: yes, that was the season former referee chief Keith Hackett called a certain Moss special the “worst refereeing performance of the season” in the 2-2 draw between eventual-champions Leicester City and West Ham, and the football world was blessed with Jamie Vardy’s snarl and aggressive finger point forever eternalised in photographic beauty.

Incidentally, the accusations of Moss being the “worst” in 2016 eventually gained numerical proof. A study on the season found Moss to be the leading culprit for refereeing gaffes, having made more “game-changing” mistakes than any other top-flight ref that season. His tally was a whopping 13 offences in 22 games. For those who like their football two decimal places, that’s a mistake every 1.69 games.

No surprise then that Moss has been on the receiving end of some less than merry managerial reviews. Perhaps upon his retirement, Jurgen Klopp might actually give his “biggest fine in world football” opinion of the 51-year-old. One can dream.

Anyhow, watch this space for a “Mossy” shoe line collab with Lotto.

Remember that 2016 study? Martin Atkinson was found culpable for a total of seven mistakes in 29 appearances (roughly one every 14.4 matches for you decimal doyens). Not bad for a man who famously earned Sir Alex Ferguson a five-match ban after the Manchester United legend said he “feared the worst” upon hearing Atkinson would take charge of the Red Devils’ clash against Chelsea in 2011.

Being a confessed Leeds fan certainly doesn’t help the anti-Manchester United case levied against Atkinson. But to make Manchester United fans feel better, Jurgen Klopp recently slammed Atkinson for his performance at Southampton after what Klopp believed to be a repeat mistake of the one which allowed United a goal against Liverpool back in 2019.

We root for parity always.

If you Google “Martin Atkinson”, the first result in the People Also Ask section reads: “Is Martin Atkinson a good referee?” which is less a straightforward question as it is an existential review of a man’s career. Atkinson’s controversies barely scrape the surface of his retiring counterparts, but his 18-year legacy will be one that inevitably divides, such is the remit for any referee.

The refereeing life ain’t easy and it certainly ain’t for everyone, but it was for these three men. Cheers.

You’ve read our goodbyes to the retiring trio, now share your own memories of them in the comments below.