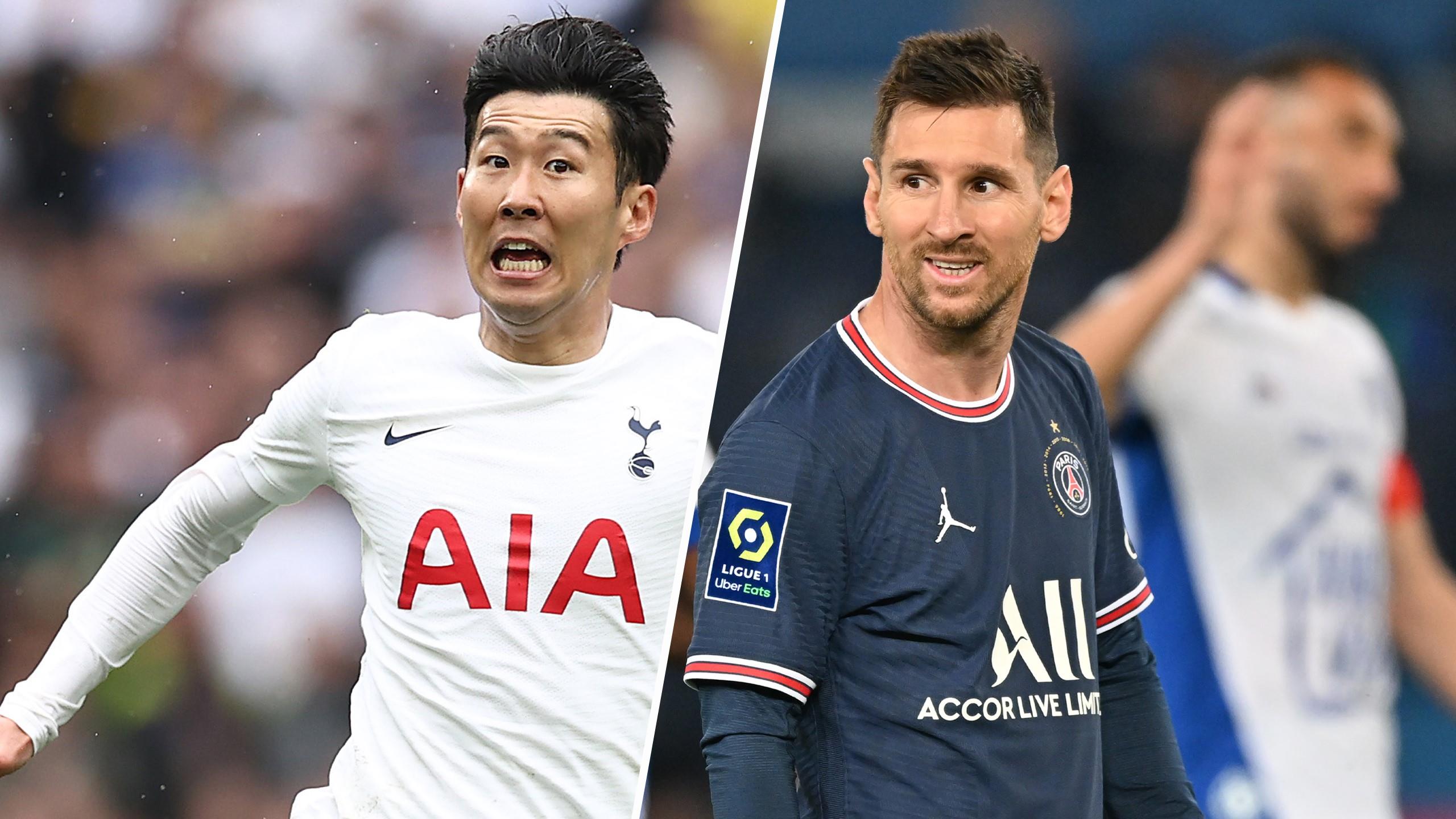 A special treat for you today.

The best, the worst, the nicest, the funniest, the most inexplicable and the least forgettable: here are the Warm-Up’s end of season awards for 2021/22. We were going to call them The Warmies but in the end we decided not to.

Player of the Season – Son Heung-min

Amazing what happens when Lionel Messi has an off year. All of a sudden there are about 20 or 30 right answers to this question, each of them with a pretty compelling case. So you can swap your favourite right answer in here, and we won’t mind a bit.

Our right answer is Son Heung-min. The obvious comparison here is with Mo Salah, who sits one goal ahead of Son in the Premier League scoring charts. We’ve gone for the Spurs player partly out of a sense of wilful perversity, but mostly because of the context. Salah has spent all season playing for one of the very best teams in the world, in a system designed to make the very most of his prodigious gifts. Son, by contrast, spent the first half of the season playing for a coach who seemed to be actively working against the very concept of goals, then the second playing for a much better coach who nevertheless tries to resign every couple of weeks. And he doesn’t take penalties, which everybody knows aren’t real goals. Playing for Liverpool: we’re not saying it’s easier, but we are saying it’s a good deal more sensible.

Goal of the Season – Sam Kerr

Team of the Season – Real Madrid

Look, we’re not happy about this. We’d like to do the decent thing and go for, say, Real Betis. Or Brentford. Or maybe Luton. Or the actual correct answer, Barcelona Femeni: unbeaten, unstoppable, and highly unlikely to lose the Champions League final. But Real Madrid’s reality-bending run to the men’s Champions League final is one of the most impressive and one of the stupidest things to happen this year, and it’s so rare that a team manages both.

To pull off one impossible comeback is, by definition, impossible. To pull off three, all in a neat little row, while also strolling to a league title and finding time to flirt with Kylian Mbappe: that’s sorcery. Karim Benzema has scored a million goals this season. Luka Modrie is still ridiculous. They don’t really have a defence. None of this makes any sense at all.

Generally speaking, this is Christian Eriksen completing his comeback. Specifically, it’s the moment he cynically fouled Norwich City’s Brandon Williams, proving that even football’s saints have to be sinners when the game demands it. Even more specifically, it’s Williams turning round to call him some rude words, seeing who he’s about to shout at, and then just grinning and giving him a hug.

Hero of the Season – Jake Daniels

There’s no real mystery behind the reasons — masculinity is pure poison, lads — but when it comes to LGBT acceptance and the fight against homophobia, men’s football is generations behind the women’s game. So infinite chapeaux to Blackpool’s Jake Daniels, the first professional men’s player to come out while playing since Justin Fashanu. Let him find this a kinder world. Let’s make it one.

The numbers aren’t great. At the time of writing, with one game left in the season, Lionel Messi has scored 11 goals. Assuming he doesn’t rattle home six at home to Metz on Saturday – and stranger things have happened – then this will be his lowest scoring season since 2008. 11 goals in 33 games? That’s the stuff of ordinary footballers, of mere mortals.

PSG won the title at a canter? That’s a thing they’ve done before Messi, and will do after he’s gone. PSG embarrassed themselves in Europe? Ditto, ditto. This is the first season to which Messi hasn’t really mattered since the first season he started to matter. The Messi supremacy had to end at some point, of course: everybody ages, everybody fades. But now, at the beginning of the end, it’s more than a little unsettling.

25 goals? In your first season in a new league and a new country? Under noted defensive manager and quivering ego-collapse Jose Mourinho? And still in the running for a European trophy? In this economy? The Tammy Abraham supremacy is here.

Fessing Up of the Season – Manchester United dressing room

Footballers say sorry for all sorts of things. For losing badly, for getting sent off, for asking about a transfer. And this season has been good for apologies, from Ivan Toney’s “When I said ‘F*** Brentford,’ I did not in fact mean ‘F*** Brentford’,” to Roy Hodgson’s “Look, the Watford fans were all the way over there.” But all apologies were overshadowed by the joint efforts of English football’s sorriest collective: the Manchester United dressing room.

Bruno Fernandes issued a novella reflecting on a penalty miss. Eric Bailly posted a thoughtful message with two pictures of him scoring a goal. An own goal. David De Gea said sorry on more than one occasion, despite being perhaps the only United player with nothing much to apologise for. Luke Shaw acknowledged his team’s performances, though has so far failed to apologise for his range of NFTs. And by the end of the season, Harry Maguire was going door to door in the Greater Manchester area.

This is partly a question of context. Bad teams are allowed to look bad, but Manchester United are a good team. You can tell because they have all those sponsorship deals and they buy all those players. So this means that when they have an excitingly up-and-down season, they end up with a lot more to apologise for than teams that aren’t so reputationally inflated.

For a while, this relentless apology tour seemed to be cheapening the whole form. “Sorry” carries with it the suggestion of “Won’t happen again,” which certainly wasn’t true. But in the end, they became so regular, so reliable, that they took on an air of ritual importance. Like rotational fouling, but for getting shouted at on Twitter. Here I am, said that week’s apologee. Come and get me. It’s my turn to take it. This all reached a strange apotheosis when Ole Gunnar Solskjaer, shortly after overseeing a 4-1 loss to Watford, apologised for smiling during his post-match interview. Maybe he knew that he would shortly be released from the apology carousel; that he would be free.

Penalty of the season – (Not that) Luis Suarez

This should be Hakan Çalhanoglu’s recent effort against Juventus in the Coppa Italia final, but it isn’t, because funny football is better than good football. Granada, who might still go down, actually escaped from this game with a draw, so Luis Suarez’s delicate drop goal might not be the thing that makes the difference. And that’s good, because it means that laughing at it doesn’t start to shade over into cruelty.

That angle, though. That angle. If any comedian-mathematicians could get in touch and explain why this is the funniest angle possible, we’d be extremely grateful.

Ostrich of the Season – Eddie Howe

Each morning, Eddie Howe wakes up a new man. A new world pops into existence right then and there. He puts on some shiny new clothes that he has never seen before, drives his new car down roads that unroll newly in front of him, and arrives at New Newcastle’s new training ground. And then some footballers appear! Out of nowhere! Best get on and coach them, then. That’s the job. Where does this all come from? How did it all get here? Nobody knows.

From Aaron Ramsdale’s trip to his local fish and chip shop, through to this week’s unfortunately-timed but remarkably sweet launch video for their new kit, it’s clear that when it comes to the business of content production, nobody does it like Arsenal.

Cynics might say that all this charming engagement with the community and all these exciting new kits serve only to distract from the great throbbing dishonesty at the heart of the club. Realists might counter by saying “Look, these things take ages to make, there’s no way they’re popping out a new kit on Thursday because they lost at the weekend.” And cynics might counter that by saying “Well, you don’t have to plan around any particular humiliation. There’s a new one every couple of months.” At this point somebody shouts “Trust the process! Fifth is a decent season!” and it all gets out of hand.

The solution is obvious. Pivot the whole club to video.

Commentary of the Season

When your enthusiasm detonates into something approaching avant-garde noise music. For those keeping score, Villareal scored 1 (one) goal.

Retro Corner of the Season

It’s been a good season for things happening, and yet no single video has brought us more joy than this compilation of strange men in green jerseys kicking footballs really really hard.

No tactical idea ever truly dies. Having your keeper hump it as far as they can will return one day. Hey, maybe that’s the way to get the best out of Erling Haaland. There’s something to look forward to.

Mourinho: I was never close to taking over at Barcelona in 2008