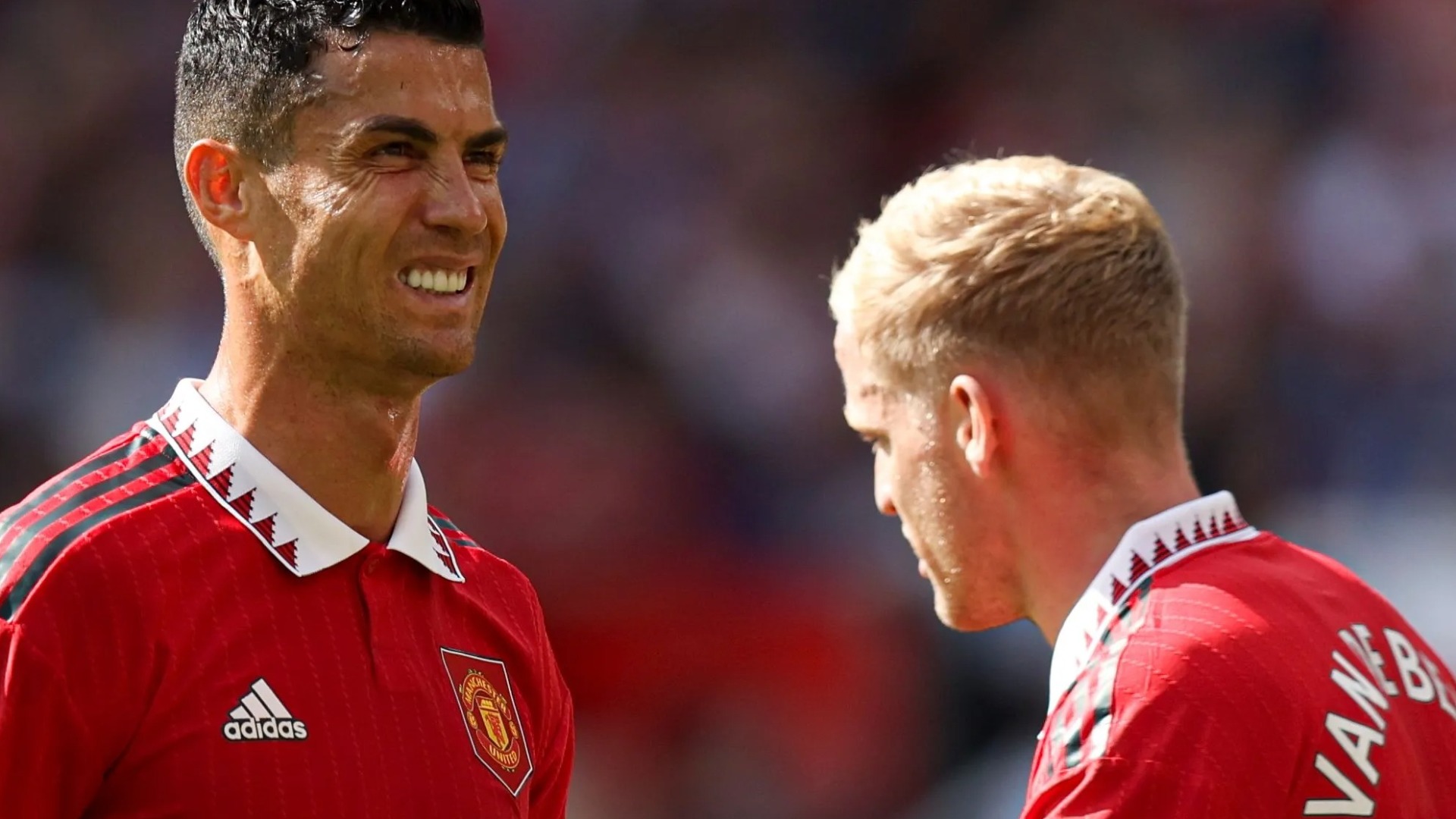 To me, Manchester United 1 Brighton 2 was genuinely the most predictable result of the weekend.

I watched it in the press room at West Ham and when the Seagulls raced into a two-goal lead, nobody looked shocked. Even the Manchester City media team didn’t snigger.

United are a shell of a football club hiding behind a crumbling facade of historic grandeur.

Their supporters are revolting against the Glazer ownership. Their Galactico, Cristiano Ronaldo, wants out. Their captain, Harry Maguire, is gone at all levels. Their central-midfield duo, McFred, are a running joke.

And of their three promising young England forwards, two — Marcus Rashford and Jadon Sancho — are shot of confidence and the other, Mason Greenwood, is on police bail on suspicion of rape and threats to kill.

Erik ten Hag called it “a hell of a job”. He ain’t kidding.

We only talk, and write, about United so much because of what they used to be a decade ago. There is a morbid fascination with them on social media because most people look at things they probably shouldn’t.

They click on links to videos of Kurt Zouma kicking pussycats. They rubber-neck at car crashes.

But to the world-class footballers United need to recruit, the club are a fading irrelevance.

Note the point-blank refusal of Frenkie de Jong to join them, despite Barcelona’s desperation to offload him.

De Jong was at school the last time United were any good. The same goes for any player coming into their prime.

Instead, United have made a bid for the 33-year-old Marko Arnautovic, formerly of Stoke and West Ham, who could join Benni McCarthy and Tom Huddlestone in the list of former Premier League footballers you had almost forgotten about, to have turned up at Old Trafford this summer.

Who’s next? If the scriptwriters want to stretch this farcical plot even further, how about Mario Balotelli? The sight of Cristiano Ronaldo, after a prolonged pre-season tantrum, on the United bench, urging his team-mates to up their workrate as Brighton ran amok, was the moment when satire died.

Arnautovic is an ageing, disruptive winger-turned-striker, who has scored 669 fewer career goals than Ronaldo. So not exactly an upgrade.

The only people who seem to regard United as they did during the Alex Ferguson era are referees. Even with the ‘help’ of VAR, Brighton were denied a stonewall penalty to go 3-0 up, when debutant Lisandro Martinez flattened former United man Danny Welbeck.

Scott McTominay — who, alongside Fred, forms a comedy double act with two straight men — could easily have been sent off early on. So the scoreline could, and should, have been far worse.

Perhaps some TV pundits also fall into this trap. On Match of the Day 2, it was stated that United had “better players” than Brighton. More famous players. More expensive players. But not better players. Not really.

Ten Hag’s greatest hope is that several of United’s mid-table rivals – including Brighton – have sold good players this summer. If that hadn’t been the case, you would fully expect them to finish in the bottom half.

The new Dutch boss – made to look weak and stupid by Ronaldo and a United hierarchy willing to indulge him – already resembles a drowning man just one game into his tenure.

United could have had Mauricio Pochettino but they have barely made a good decision in ten years.

They need the kind of long-term reboot which Arsenal are undergoing.

But that would need humility and self-awareness. And United’s hierarchy don’t possess those qualities.

Their vast social media numbers kid them that they are still relevant.

Yet people are ‘following’ them to laugh and gawp, not to admire.

They are WAGs in bikinis. They are toddlers swearing. They are Pets Do The Funniest Things. They are Clickbait FC.

You really shouldn’t do it but you won’t be able to help yourself.

THERE were many fashion crimes during the Premier League’s opening weekend.

From Scott Parker’s astonishing airline-pilot jacket, Erik ten Hag’s T-shirt-and-jacket combo and referee Paul Tierney’s skinhead to the Chelsea away kit which looks like the laminated front of a menu at a low-rent Greek holiday resort.

But the best look was undoubtedly Nottingham Forest turning up at Newcastle without a shirt sponsor in the sort of glorious plain red tops they used to win European Cups in.

Sadly, this was due to a failure by the club’s commercial department to strike a deal, rather than a deliberate retro look or a statement against dodgy Far Eastern gambling sponsorships – but boy did it look good.

ANYONE who doubted Aleksandar Mitrovic’s ability to cut it in the Premier League simply hasn’t been paying attention to Fulham’s Serbian score-lord.

But his opening-day double against Liverpool wasn’t their most eye-catching performance — that came from new Portuguese midfield enforcer Palhinha.

I haven’t seen a Premier League player tackle with such consistent ferocity for at least a decade.

Which means Palhinha will become a cult hero. And get sent off at least three times a season.

WHAT is going on at Aston Villa?

Steven Gerrard has lost his long-term No 2 Michael Beale to QPR, sold his best youngster Carney Chukwuemeka to Chelsea, stripped Tyrone Mings of the captaincy, then benched and criticised him, only to lose to relegation favourites Bournemouth?

Villa have failed to win any of their last nine matches against current Premier League sides, losing seven.

Next weekend’s clash with Everton, and old chum Frank Lampard, feels like some sort of celebrity death-match.

PREMIER LEAGUE referees are on a mission to clamp down on time-wasting — yet the ball was in play for just 47 per cent of the Everton v Chelsea match.

One initiative to supposedly help was a new ‘multi-ball’ system.

But at Craven Cottage on Saturday, where Fulham took on Liverpool, there were at least three occasions where two balls were chucked onto the pitch simultaneously at a throw-in, actually slowing down the play still further.

The only answer to all this is a stop-start clock showing 30 minutes each way. Younger readers should expect this some time early in the 22nd century.

CHELSEA have splashed out £160million this summer and are prepared to cough up another £80m on Leicester defender Wesley Fofana.

And that would make for a bigger annual transfer spend than ANY single year of Roman Abramovich’s reign.

So while Thomas Tuchel doesn’t want to talk up his side as title challengers, he bloody well ought to be. And new owner Todd Boehly might think so too.

CAN we get rid of the wow factor surrounding anyone being “quick for a big man” after Erling Haaland’s two-goal debut?

So is Usain Bolt. He was nippy too.

WE hardly knew Bruno Lage and Jesse Marsch until they staged a feisty touchline spat at Elland Road — a PR boost for the managers of Wolves and Leeds.

We can barely wait for the “Will they? Won’t they? Handshake-gate” build-up to the return tie.

THE uproar over the scrapping of the classified football results on Radio 5 Live’s ‘Sports Report’ is not misty-eyed nostalgia for loss of a grand tradition.

It’s about genuinely wanting to hear a list of all the full-time scores.