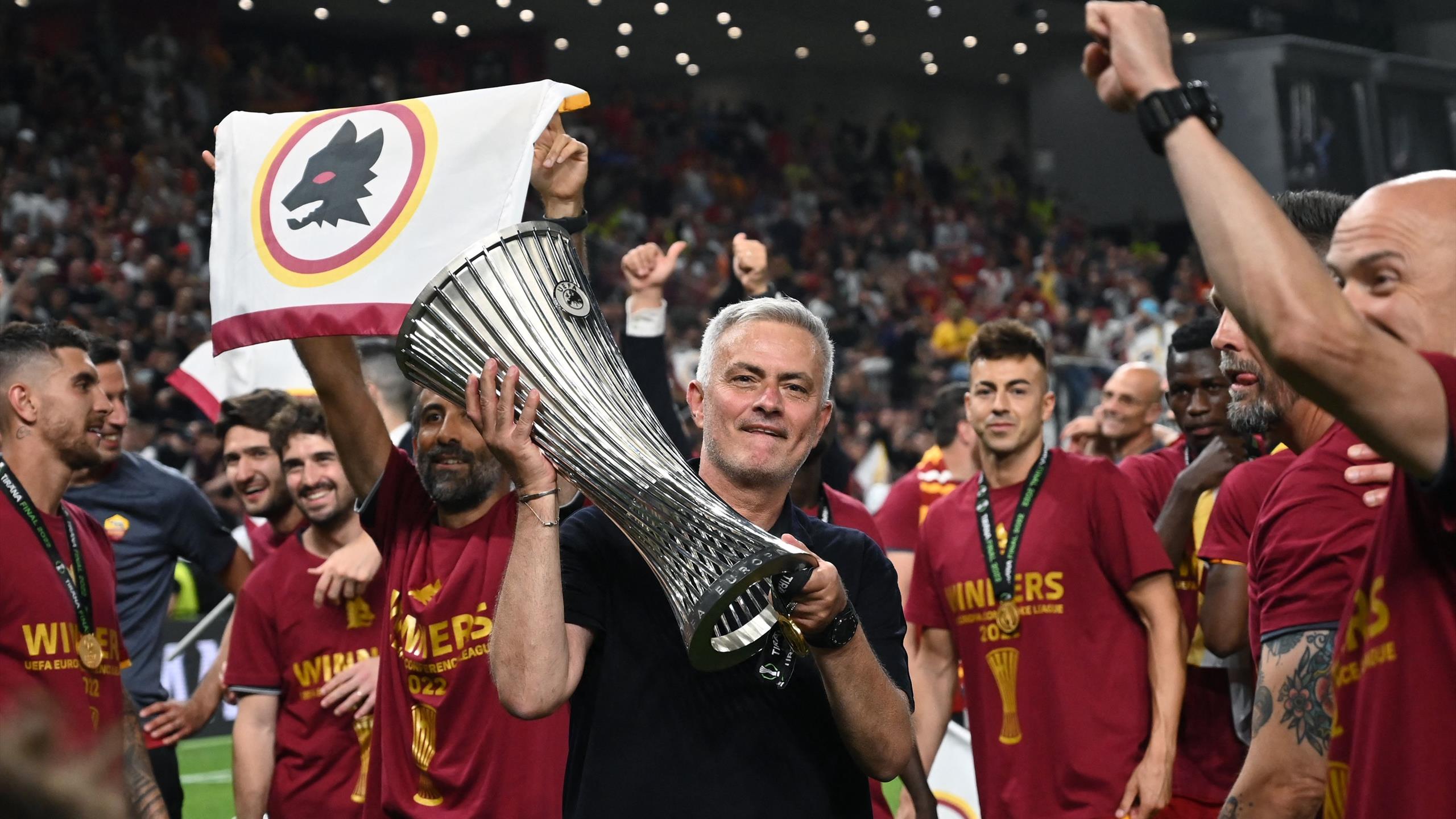 Jose Mourinho arrived at the Arena Kombetare chasing his fifth European title, having won the Champions League with Porto and Inter Milan, the UEFA Cup with Porto and the Europa League with Manchester United. His team delivered, with the Giallorossi winning their first European trophy since the Anglo-Italian Cup in 1972.

Feyenoord made a fast start to the match, winning the ball high up the pitch, playing on the front foot and driving forwards through Arsenal loanee Reiss Nelson. Still, while they established a stranglehold on possession, they struggled to make meaningful chances and, after 20 minutes, neither side had mustered up a shot.

Roma gradually found their feet, Lorenzo Pellegrini pushing and probing as Tammy Abraham galloped about in search of a through-ball. When they opened the scoring in the 32nd minute it still felt like a bolt from the blue, however, not least because it came from their first shot of the match.

Playing on the right side of Roma’s back three, Gianluca Mancini floated a diagonal ball into the box from deep and picked out Nicolo Zaniolo. He showed fantastic close control to chest the ball down and flick it over Feyenoord goalkeeper Justin Bijlow as he rushed off his line in an attempt to smother the shot.

Feyenoord upped the tempo, Orkun Kokcu testing Rui Patricio with a swerving shot from distance, but Roma soaked up the pressure until the break. It became clear right from the restart that the second half would be much more uncomfortable for Mourinho’s side, Mancini almost scoring an own goal under pressure from Gernot Trauner only to be saved by the woodwork.

Roma’s Italian midfielder Nicolo Zaniolo (C) celebrates with teammates after scoring the opening goal during the UEFA Europa Conference League final football match between AS Roma and Feyenoord at the Air Albania Stadium in Tirana on May 25, 2022

The goal frame was left shuddering again moments later, Rui Patricio pushing a thunderbolt from Tyrell Malacia onto the post. Feyenoord were lucky not to be reduced to 10 men when Marcos Senesi subtly impeded Abraham as he got in behind, dragging him back by the arm, but neither the referee, Istvan Kovacs, nor VAR thought it was worthy of a red card.

A slip from Chris Smalling almost allowed Cyriel Dessers to go one-on-one, but Roger Ibanez made a fantastic covering tackle to deny him. At the other end, Bijlow did well to keep out Jordan Veretout.

Roma were pinned back in their final third for the last 20 minutes but, despite several scares, they held firm and saw out the match. It will go down as a Mourinho masterclass and, despite a topsy-turvy debut season with the Giallorossi, he has duly written himself into Roma folklore.

Mourinho magics up another European triumph. It hasn’t been an easy first season for Mourinho at Roma, but he will take this as vindication. Having only managed a sixth-placed finish in Serie A, ending up one point behind hated rivals Lazio, he needed to end on a high.

A goal against the run of play, long stretches of gritty defending, two yellow cards for timewasting late on: Roma could not have found a more fitting way to secure their first trophy under Mourinho. Given that, after a 6-1 defeat to Bodo/Glimt back in October, he seemed to have reached his managerial nadir, recovering to win the Europa Conference League could go down as the start of a late-career renaissance.

Rui Patricio (Roma). While Ibanez, Smalling and Mancini all deserve credit for fighting a courageous rearguard action, Roma would not have won this match without Patricio’s saves.

His leap to deny Malacia, tipping his shot onto the frame of the goal and away, was especially impressive. He also marshalled his defence well throughout, commanded his area and dominated in the air which, given how many long balls he faced as the match wore on, was absolutely crucial.

32’ GOAL! With their first shot, Roma are in front. Mancini floats a diagonal ball into the box and Zaniolo latches onto it, chesting it down before flicking a shot past Bijlow.

40’ GOOD HIT! Kokcu loses patience with his teammates’ gradual build-up play and unleashes a shot from 30 yards which swerves in the air and almost wrongfoots Patricio. The Roma goalkeeper does well to recover, patting the ball down and holding on at the second attempt.

48’ ALMOST AN OWN GOAL! Under pressure from Trauner at a corner, Mancini turns the ball onto the near post. Patricio then gets down low to deny Guus Til from the edge of the area.

49’ INCREDIBLE SAVE! Feyenoord come forward again and Aursnes backheels the ball to Malacia on the edge of the box. He leathers a shot at goal, which Patricio pushes onto the post.

52’ RED CARD SHOUT! Abraham gets in behind and Senesi impedes him, pulling him back by the arm. The Roma forward doesn’t go down but appeals furiously as Bijlow sweeps up. Referee Istvan Kovacs doesn’t spot it and VAR declines to intervene. Senesi can count himself lucky there, really.

59’ SO CLOSE! Smalling slips and Dessers goes through one-on-one, but Ibanez gets back to make the tackle and deny the Feyenoord man an equaliser.

81’ GREAT CHANCE! Dessers gets in behind on the right and cuts inside with the Roma defence horribly stretched. He delays his shot, however, giving Smalling time to scramble across and get a block in.

Jose’s time to shine, as Klopp wins award that no one will debate – The Warm-Up