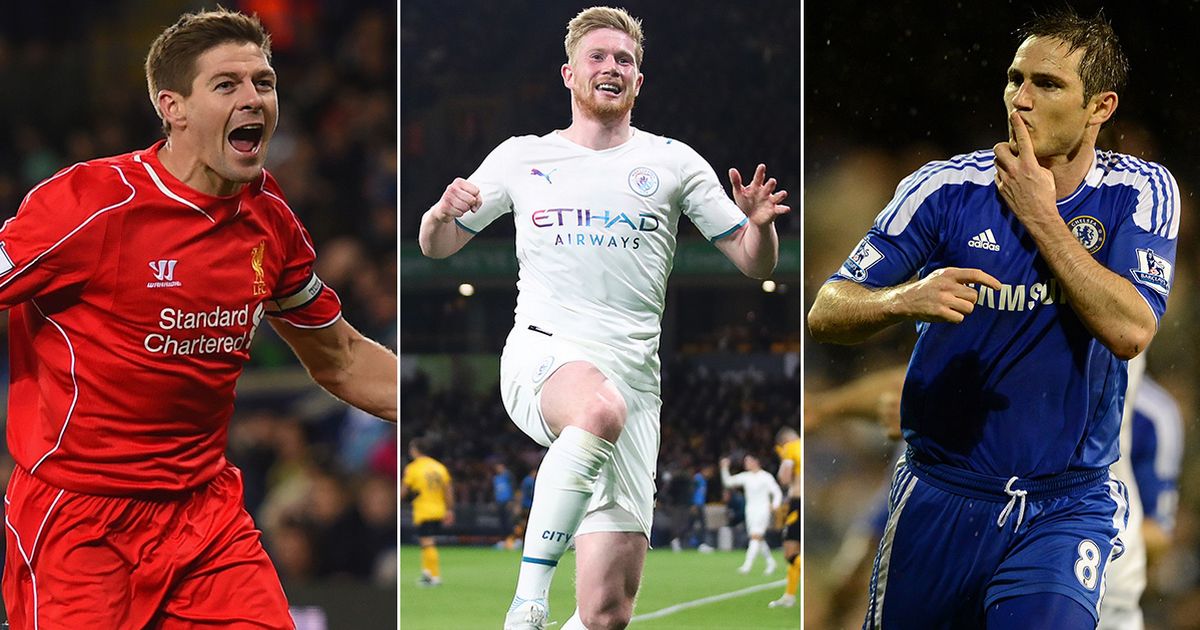 Manchester City star Kevin De Bruyne has continued to climb the Premier League’s all-time assist table, and has a great chance of cracking the top five next season

De Bruyne’s pinpoint ball across the Aston Villa box allowed Gundogan to tap home, completing a comeback from 2-0 down and ensuring Pep Guardiola’s side were crowned champions. However, it also allowed the Belgian to move up a place in the all-time assist rankings.

The former Chelsea midfielder now has 86 assists in the Premier League in just 210 appearances, bringing him level with Liverpool veteran James Milner. However, as we can see from the list of all-time leaders, De Bruyne could well find himself in the top five by the end of next season.

Former Manchester United man Beckham was ahead of De Bruyne at the start of the season, but the City star’s eight assists saw him leapfrog the midfielder. The Englishman played a few more games than De Bruyne, too, with his total of 265 meaning he’ll still have played more at the end of next season.

Beckham’s first Premier League assist came back in the 1995-96 season, not long after Alan Hansen famously claimed “you can’t win anything with kids”. His 80th and last arrived in a victory over Charlton Athletic in May 2003, shortly before he left United for Real Madrid.

De Bruyne may have represented two clubs in the Premier League, but all of his assists have come in a City shirt. His brief spell at Chelsea brought only a handful of starts, but the assists started coming when he returned to England after a stint in Germany.

His first Premier League assist for City was one of two in a victory over Newcastle United back in 2015. His single-season record of 20 (in 2019-20) remains a joint record in the history of the competition, while this season is the first in which he has recorded more goals than assists in the league.

Can Kevin De Bruyne make it to 100 Premier League assists next season? Have your say in the comments section

Milner became the first player to get Premier League minutes at the ages of 16 and 36 when he featured for Liverpool this season. He was 16 when he scored his first goal in the competition for Leeds United, but didn’t get off the mark for assists until 2005, when he’d moved to Newcastle United.

The veteran has just one Premier League assist to his name this season, in Liverpool’s 5-0 win at Watford. He has also set up goals this term in the EFL Cup and Champions League, and could have a chance to add one or more in the European final against Real Madrid.

Speaking of Liverpool midfielders, Gerrard is the next man in De Bruyne’s sights. The England midfielder played his final Premier League game a few months before De Bruyne arrived at the Etihad Stadium, and has seen his 92-assist lead cut to just six.

The first season in which he registered a Premier League assist was 1999-2000, when he laid on a winner for Titi Camara against Arsenal. Nearly 15 years later, he was still at it, notching an assist in a dramatic 3-2 Reds win at QPR.

A former teammate of De Bruyne at the Etihad Stadium, Silva is now at risk of being overtaken by his ex-colleague. Silva left City with 93 assists to his name, hitting double figures in four separate seasons including his last in 2019-20.

Since leaving Manchester, the Spaniard has shown he can still do the business. He might have only registered four assists for Real Sociedad this season, but his influence helped the club finish sixth.

If De Bruyne adds another eight assists next season, he’ll draw level with Bergkamp. He’s some way short of the former Arsenal man in terms of goals, though, with 57 to the Dutchman’s 87.

Bergkamp registered at least one assist in each of his 11 seasons with the Gunners. This total included eight in his first season in England, as well as seven in the 2003-04 ‘Invincibles’ season.

One of four men in triple figures, Lampard’s tally encompasses more than a decade in the Premier League with West Ham United, Chelsea and Manchester City. Only one came for City, though, as he laid on one of Sergio Aguero’s four goals in a 4-1 victory over Tottenham in 2014.

That came more than a decade and a half after his first Premier League assist, during a season in which he finished eight with West Ham. The majority, though – as well as the majority of his goals in the competition – came for Chelsea.

Rooney pipped his former England colleague Lampard by just a single assist by the time the pair had both retired. He entered his final season with Everton one behind his compatriot, but crept past Lampard by May 2018.

While Rooney is 17 clear of De Bruyne, it’s not out of the question that he’ll be passed within a year. De Bruyne did record 20 assists in the 2019-20 campaign, after all.

Fabregas posted impressive numbers for both Arsenal and Chelsea
(

The second member of Arsenal’s 2006 Champions League final squad on this list, after Bergkamp, Fabregas made it to triple figures across a number of years with the Gunners and Chelsea. The tally includes a remarkable 18-assist season in 2014-15 as Chelsea won the league under Jose Mourinho, with Diego Costa often the beneficiary.

Fabregas’ last Premier League assist came in his last full season as a Blues player back in 2017-18. He has featured less frequently for current club Monaco this season, but did pick up a handful of Ligue 1 assists last term.

While De Bruyne may feel a top-three spot is within his reach, catching Giggs looks nigh on impossible. The Welshman enjoyed more than 20 years as a Premier League player, and put up impressive numbers throughout that run.

Back in 1992-93, when Giggs recorded his first five Premier League assists, De Bruyne was still in nappies. His last assist came in the 2012-13 campaign, when he helped Manchester United win the title, and it’s hard to see his record ever being beaten.