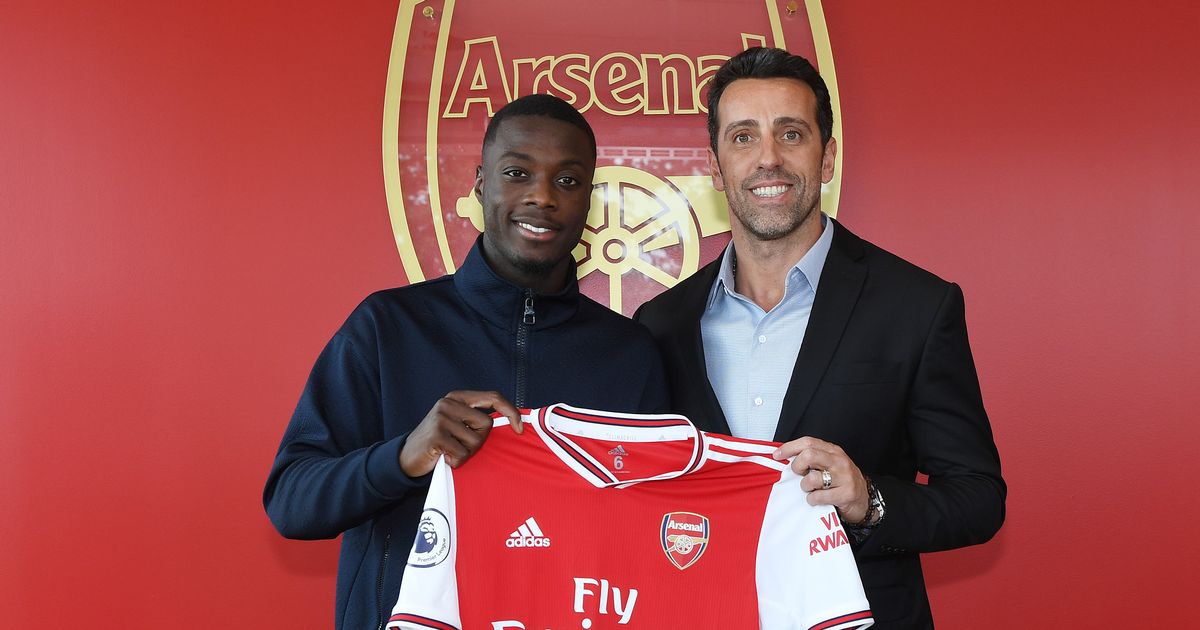 Nicolas Pepe is keen to leave Arsenal this summer, three years on from the club-record £72million transfer which brought the Ivory Coast winger to north London from Lille

Arsenal were very excited to land Nicolas Pepe in 2019 (

When Arsenal signed Nicolas Pepe from Lille in 2019 they were pretty happy with themselves.

Pepe was one of the most exciting players on the market in Europe three years ago, having contributed 23 goals and 12 assists in 41 Ligue 1 games for Lille the previous season. Barcelona and Napoli were interested in his services, but the Gunners were determined to get their man after dismissing Wilfried Zaha due to Crystal Palace’s £100million valuation.

The wheels were set in motion and, due to the money involved, technical director Edu and former head of football Raul Sanllehi kept the owners up to date during the club’s pre-season tour of the US. Once rivals had been fended off, officials from Arsenal and Lille spent two days thrashing out the particulars of the deal.

The end result was the now-infamous £72m transfer fee and a five-year contract worth a reported £140,000 per week. Napoli reportedly offered £85m for Pepe, but the Ivory Coast international wanted to join Arsenal. The Gunners had spent £58m on Pierre-Emerick Aubameyang the previous year, but this deal still represented a landmark moment for the club.

Three years on, amid reports that Pepe wants to leave, it seems like a gamble that has not paid off. Pepe has 27 goals and 20 assists in 111 appearances for Arsenal, which is far from a disaster, but his most recent performances off the bench show a player devoid of confidence.

His current state – and Arsenal’s stance of being happy to accept a bid of around £25m – shows just how wrong things have gone. Back in October 2020 football.london were reporting that there was ‘widespread agreement’ among the Arsenal hierarchy that Pepe was ‘by far the best option’ due to his age and room to increase his market value over the coming years.

That has not happened and the Gunners are right to try and cut their losses. Marseille and Lyon have been tentatively linked with the 26-year-old, who might be given an opportunity to return to Ligue 1.

HAVE YOUR SAY! Has Nicolas Pepe been a flop at Arsenal, or should they keep the faith with him? Comment below.

If that happens then Arsenal should use the saga as an example of what can go wrong in the high stakes game of transfers. They can’t afford to worry about it now, with another crucial transfer window on the horizon.

Arsenal spent over £150million to sign six players last summer and need a similar recruitment drive this time around. With Pierre-Emerick Aubameyang gone and Alexandre Lacazette and Eddie Nketiah coming to the end of their contracts, strikers are a clear priority. Meanwhile, a new central midfielder, centre-back and full-back are all on the cards.

Mikel Arteta’s side have been linked with just about every available player in Europe over the past few weeks, but for now Manchester City’s Gabriel Jesus and Leicester’s Youri Tielemans appear to be the most likely additions. Results on Sunday will go a long way to determining Arsenal’s pull, with Champions League qualification a major factor in the thinking of players.

Arsenal will probably have to attract players with the lure of the Europa League, meaning the top-tier talent may prove unavailable. But with the £72m lesson from Pepe still fresh in the mind that might not prove to be an entirely negative thing.