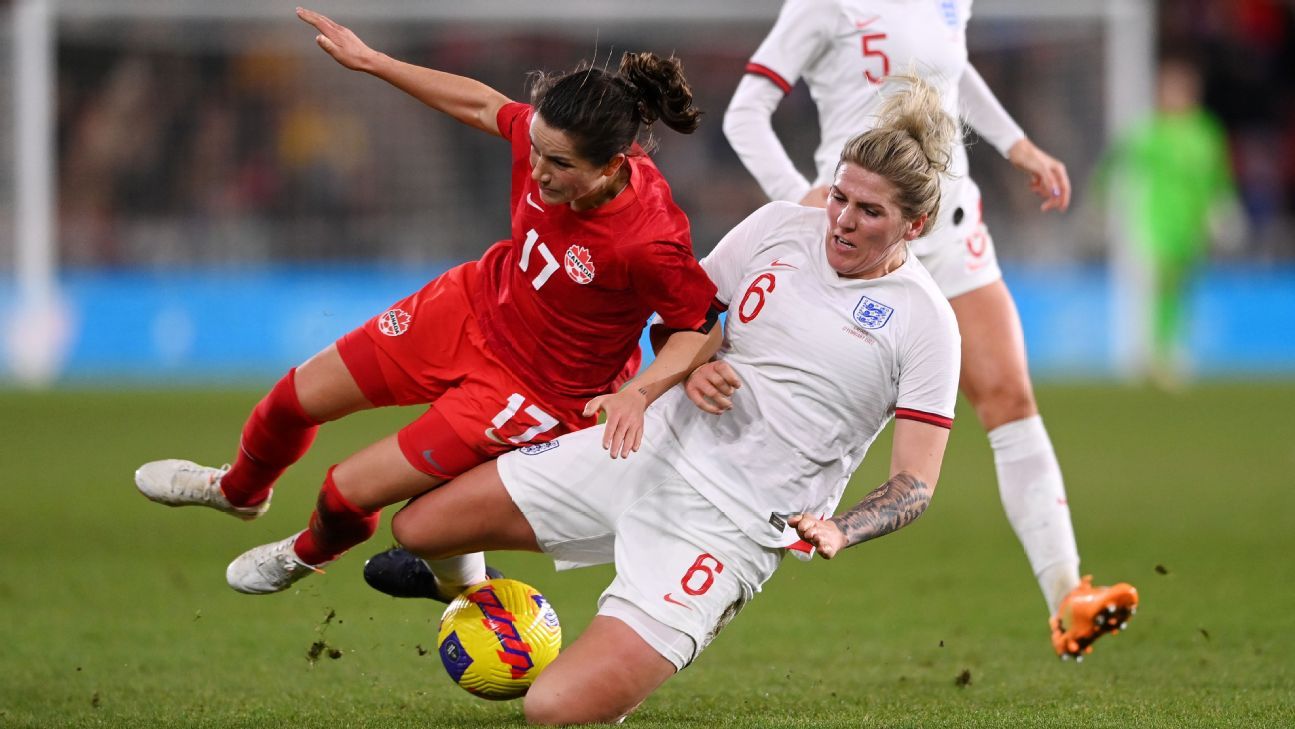 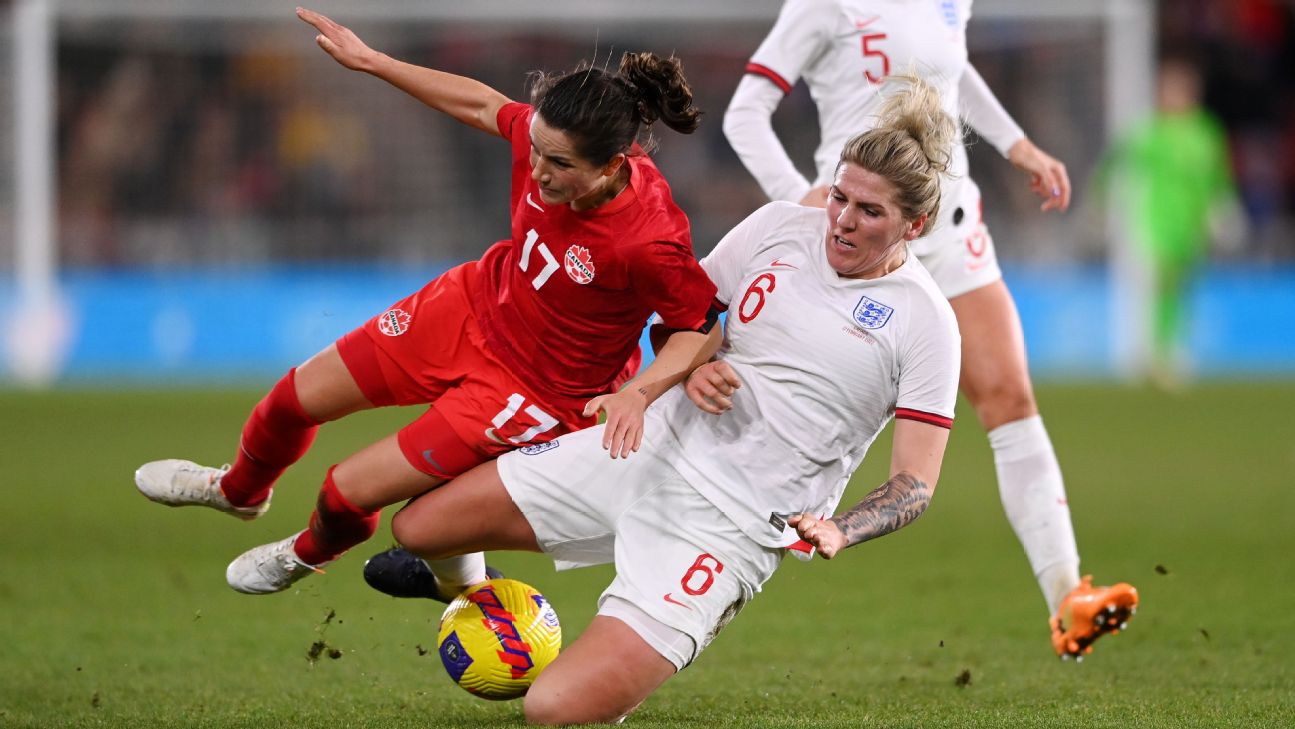 Modern football is different from the past, it’s undeniable. But what will always remain is our obsession with the toughest competitors on the field: from old schoolers like former Manchester United captain Roy Keane, ex-Arsenal skipper Tony Adams and one-time Wimbledon hatchet man-turned-Hollywood actor Vinnie Jones to, more recently, Jack Grealish’s calves. And what’s true in the Premier League is also just as apparent in the women’s game, not least this summer’s UEFA Women’s European Championship (LIVE July 6-31 across ESPN networks in the U.S.).

Football fans everywhere still mythologise the bruiser who entertains us by getting into scraps, flying into tackles and displaying the level of cojones that Diego Simeone is always gesturing from the sidelines so graphically that he wants from his Atletico Madrid players. But not everyone moves with the times.

Three months ago, Northern Ireland boss Kenny Shiels apologised for his ill-conceived comment that it’s hard to stop women’s teams from conceding one goal after another because women are “more emotional” than men. I hope he enjoyed watching the Paris Saint-Germain men’s team collapse in the Champions League this season (and, it seems, every single season), which of course had absolutely nothing to do with emotional or physical frailty.

With those words in mind, here is a list of some of the toughest competitors in the women’s game ahead of Euro 2022 kicking off in England on July 6 as a way of demonstrating that male players don’t hold the monopoly on muscle.

We start with a player on the smaller side in terms of stature — at 5-foot-3 — to show that you don’t need to be big to be tough. Being strong is a state of mind, and Van de Donk is mentally as tough as they come. She joined Lyon last summer and ended her first season in France by picking up a Champions League medal, which she can hang alongside the one she earned for winning Euro 2017 with Netherlands. Van de Donk showed she was not intimidated by the change of league last season by winning 65.3% of her tackles and — incredibly, for a player of her size — 80% of her aerial duels.

Playing predominantly as a No. 10, getting between the lines and displaying a wide range of classy passing, she is also comfortable in a more box-to-box or defensive role — which she filled at former club Arsenal — tracking back and taking out opponents on the break. Here is a great compilation of her doing just that, racking up the yellow cards for the sake of her team. She’s never afraid of a scuffle and is constantly in the ear of the referee, hustling whatever advantage or marginal gain she can get. Classic tough-guy antics.

The go-to candidate for host nation’s England’s chief enforcer at would have been Steph Houghton — the stately former captain who should be considered one of her country’s centre-back greats alongside Adams, John Terry and Sol Campbell — but manager Sarina Wiegman made the bold call not to include her in the final squad, following a season plagued by injury. Fortunately, Houghton has taught everything she knows to her long-term defensive partner Millie Bright. According to her bio on the Chelsea website, the 28-year-old is known for her “thunderous tackles” and gets her fans out of their seats with a “crunching challenge” or two.

Like any quality modern centre-back, Bright is also incredibly able on the ball and was even utilised as a striker by Wiegman in the inaugural Arnold Clark Cup in February of this year (where she ended up sharing the Golden Boot with Alexia Putellas, the reigning Ballon d’Or winner.) It’s not hard to trace the roots of Bright’s Yorkshire grit. She told The Guardian in 2017:

“My grandad Arthur always told me: ‘If you’re going for a ball you go in 100%, never half-hearted.’ He always said: ‘Millie, if it’s a 50-50 you’re coming out with it.’ Every game I’ve had that mindset. Grandad used to work in the mines and he’s a big part of my career.”

At the last Women’s Euros in 2017, Bright won 75% of her tackles, 76.9% of her aerial duels and recovered the ball 25 times in just six matches as England reached the semifinals. If the host nation go even further this summer, Bright will have plenty to do with it.

Mapi has a neck tattoo and loves motorcycles, so she’s already an absolute lock for this list. All too often there is a tendency to compare women footballers to their male counterparts, but in the case of Mapi it’s fair to mention her alongside Barcelona legend Carles Puyol. Both are battle-hardened and versatile serial winners, with Mapi starting her career at left-back but also lining up at centre-back and in midfield. And, like all Barcelona players, she is comfortable on the ball and happy playing in a high block as an addition to the attack.

She’s so tough that she gets bookings without even making contact: In January of last year she was suspended for four matches after calling out a referee on social media for showing her two yellow cards against Real Madrid when she clearly won the ball on both occasions, leading to the Spanish FA publishing a four-page explanation of her ban.

This was typical of the forthright Mapi, who has also spoken publicly about LGBTQIA+ rights. Using an interview with El Mundo to come out in 2018, she was highly critical of FIFA staging the World Cup in Russia, citing the anti-gay purges in Chechnya. This is a theme throughout women’s football: Those who identify as LGBTQIA+ playing the sport professionally, while often not being supported or respected, have had to become activists and role models which, to me, is the toughest thing you can do. Mapi’s neck tattoo may read “Looks can be deceiving,” but she’s made it perfectly clear what she stands for.

Standing at 6-foot-2, Renard is the most physically domineering presence on this list. She has been described as the female Virgil van Dijk but, seeing as she is a year older than the Liverpool defender and won the first of her 14 French league titles in 2006-07, perhaps that comparison should be working the other way around. The 31-year-old’s game combines strength and pace; she is calm under pressure and rarely out-muscled. Her timing is impeccable, and she’s made an art out of stepping across and intercepting the ball before it reaches its intended target. As you might expect for a player of her height, she won 82.2% of her aerial duels in the French league last season, but her average of 6.7 recoveries per game last term shows she’s just as formidable on the deck.

Renard has great technique on the ball and is one of few defenders entrusted with taking set pieces — including penalties — for her club. She may be the defensive bedrock of Lyon becoming a European powerhouse, playing a part in all eight of their Champions League triumphs, but she also makes her presence felt at the other end of the field, scoring 33 goals in 131 appearances for her country. Her habit of pointing to the ball she’s just won after another successful tackle, as if to say “yes, I did just win it again,” is the ultimate flex.

Perhaps the first thing you would say about Chelsea forward Harder is not that she’s a real bruiser of the game, but more likely that the 2018 Ballon d’Or runner-up is one of the best footballers in the world right now. You wouldn’t call Cristiano Ronaldo a “hard man,” per se, despite his six-pack, but you certainly wouldn’t mess with him, and Harder should be looked at in the same vein. She never gets shaken off the ball, and if she gets scythed down she’s straight back up on her feet demanding the referee gets a card out.

When Denmark reached the final of the 2017 Euros, she was fouled 12 times and made 48 recoveries in her six appearances, as well as fulfilling the requirements of her “day job” by scoring in the final, a 4-2 loss to Netherlands. Besides, she’s literally got the word “hard” in her name — what more do you need?

An honourable mention must go to Scotland captain O’Toole. Unfortunately, Scotland haven’t made the Euros, but I couldn’t leave her out. The right-back has to be on any list of soccer’s toughest players if only for one reason: Whilst captaining St Mirren in a match against Inverness Caledonian Thistle in 2020, she came out worse from a 50/50 challenge and dislocated her kneecap. With barely a flinch, she popped it back into place with three or four firm whacks to her patella, got up and played the rest of the game.

For anyone still unconvinced about the credibility of the women’s game, I’d urge them to watch any men’s Premier League match and observe their heroes writhe around on the floor at the faintest hint of contact. Then think about O’Toole essentially performing midgame surgery on herself — as her team was losing 6-0. O’Toole told the Daily Telegraph afterward:

“Coming off never crossed my mind. We had subs, but I’m the captain, I’m not letting the side down, no way. The game wasn’t going well… we only lost 7-0 so I must have done OK after that. It’s my job as captain to set an example. I don’t see it anything more than that.”

It’s probably no surprise that O’Toole isn’t squeamish: Away from the football pitch, she is a practising dentist by trade.