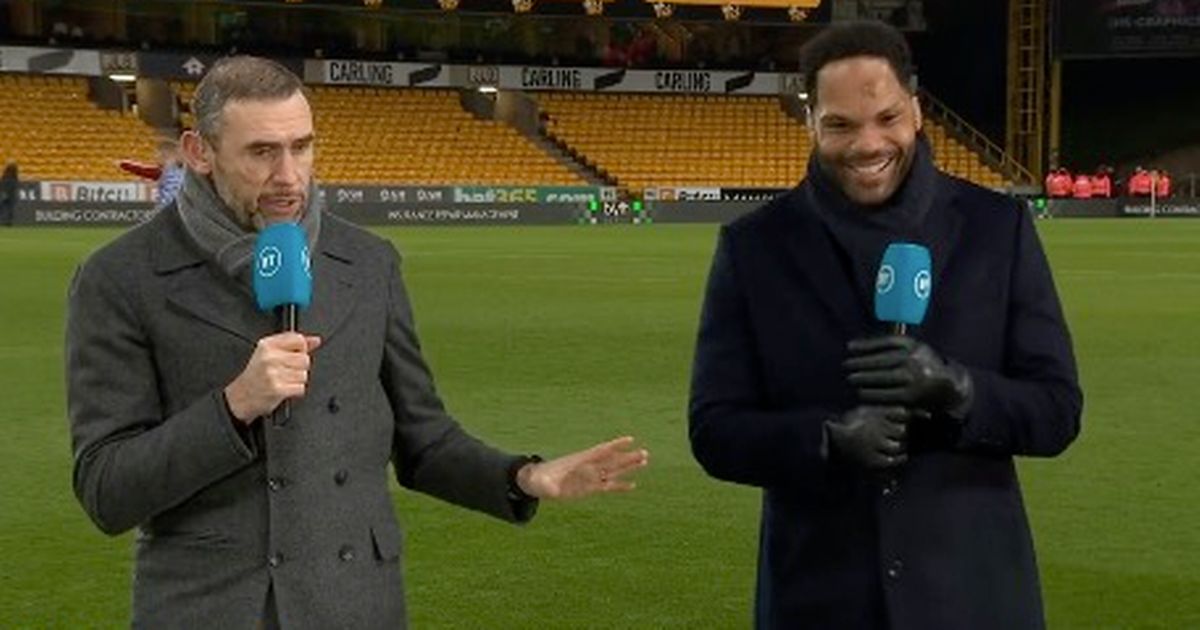 Martin Keown has clashed with fellow pundit Joleon Lescott over what he believes was a “pedantic” red card shown to Arsenal forward Gabriel Martinelli in their win over Wolves.

The Gunners clinched a vital three points to strengthen their bid for a top four place in the Premier League by winning a feisty game 1-0 at Molineux .

Gabriel Magalhaes’ tap-in from a first-half corner was enough to win it for Arsenal, who had to play the 25 minutes with 10 men after Martinelli’s quickfire dismissal.

The 20-year-old picked up the first red card of his career after Michael Oliver brandished two yellow cards in quick succession .

Martinelli was frustrated not to win a foul and pushed Daniel Podence as he took a throw-in. He then ran back and barged over Chiquinho seconds later to commit a second bookable offence.

The red card was Arsenal’s fourth in their last six games in all competitions, but former Gunners defender Keown believed the decision was “pedantic” and didn’t “feel sporting”.

“I thought the referee was pedantic with the decision, obviously Joleon will have a different opinion,” he said on BT Sport’s coverage of the match.

“But I felt the Arsenal team responded: they put that anger into their play. They put it out there onto the pitch and got what they needed.”

However, former Wolves centre-back Lescott believed Oliver made the right call, with the time between the two incidents irrelevant.

“I think if you look at them as isolated incidents, I think they’re both yellow cards,” he said.

“The first one is slightly harsh – if you assess it, he’s going to feel hard done by that he didn’t get the foul. But then he’s trying to prevent Wolves from trying to take the throw-in and playing the ball forward.

HAVE YOUR SAY! Do you agree with Martin Keown’s take? Was Gabriel Martinelli unlucky to be sent off? Comment below.

“If that was a free-kick, then he’s getting booked. The ref didn’t know he was then going to go and make that decision to foul Chiquinho.”

Keown responded: “It’s within Michael Oliver’s gift to do that – it’s in the laws of the game – but you very rarely see that. He was getting fed up with a succession of free-kicks, it was getting niggly.

“I just felt it was quite tough on the player and they’re going to be without him now for a very important game. They saw it through and it didn’t really matter on the night.

“Nonetheless, I thought it was pedantic from the referee. Referees up and down the country will have a different opinion. He can do that. Maybe it’s a warning to players to be very careful in those situations.”

Lescott didn’t leave it there, adding: “We all knew he was going to be on the first (yellow). That’s the thing, he’s reacting to his frustration of not getting a foul. He’s shown his frustration by trying to stop Podence from taking the throw-in.

“We’re all aware that’s a yellow card. The ref chose to play the advantage and play on then all of a sudden the emotions have got the better of him and he’s committed another foul.”

Keown rejected that theory, adding: “I just think that in the heat of the moment he doesn’t know (the first foul is a booking). He’s played an advantage and it’s difficult in that separation, it’s a difficulty in the law isn’t it? It’s a difference of opinion (with Lescott).

Gabriel Martinelli’s second yellow was for a barge on Chiquinho

“I’d like to know how many referees call that up and down the country. Now it looks like a stupid thing to do, but in the moment I probably would have done the same thing myself. It’s gone now.

“In isolation I think they’re yellows but I think really he should have stopped the game there and given him a yellow. I know he’s trying to play an advantage.

“I just feel there’s a moral issue with what the referee has done. It doesn’t feel sporting. You might have a different opinion. I’ve not seen it too many times.

“ Maybe it’s going to be a theme up and down the country. I’ve asked the producers to tell me… and there’s only really been one or two of these incidents that have happened around world football. Maybe it’s a new directive.

“It nearly spoiled it from an Arsenal point of view, but in the end it didn’t matter. In the end it’s a good three points for Arsenal. We can all learn as well.”