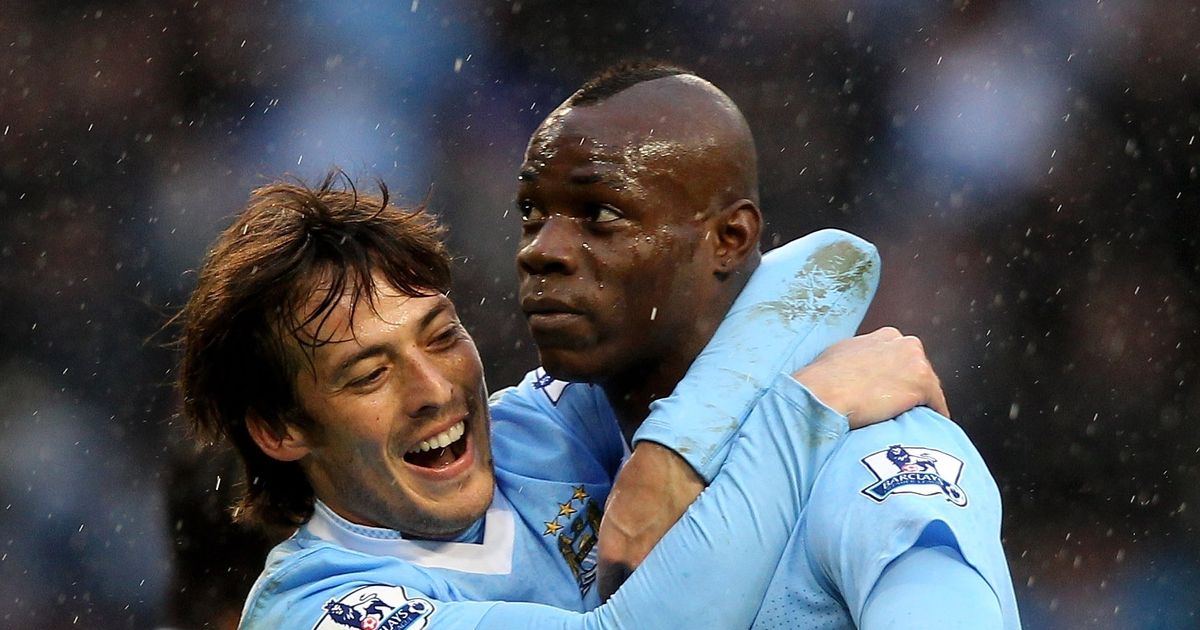 Manchester City’s 2011-12 Premier League title win was as dramatic as they come, but the final-day winner from Sergio Aguero wasn’t the only bit of late drama during the run-in.

Back in January, long before the tension against Queens Park Rangers and with the vital Manchester Derby victory still some way away, City found themselves involved in a title race which still contained three teams, not just the two from the same city.

As Roberto Mancini’s side prepared to welcome Tottenham Hotspur to the Etihad Stadium, they sat three points clear of United at the top and only five ahead of Harry Redknapp’s visitors.

An away win could have blown the title battle wide open. Instead, though, the hosts delivered the kind of victory which would devastate even the hardest-hearted opponent.

Where does Man City v Spurs rank in the most dramatic Premier League games? Have your say in the comments section

Spurs were left devastated by the late defeat
(

City’s start to the season had marked them out as legitimate title contenders, with their 6-1 victory at Old Trafford far from the only example.

Indeed, Spurs had been put to the sword themselves back in August, with Edin Dzeko scoring four of the five goals netted by Roberto Mancini’s side at White Hart Lane.

The Londoners had been flying since then, though, winning 14 of their next 19 games and losing just one thanks to significant contributions from the likes of Emmanuel Adebayor, Rafael van der Vaart and an often-unplayable Gareth Bale.

If there was ever a test of their title credentials, the trip to City was exactly that.

Dzeko had scored four times in the reverse fixture
(

Redknapp had played down Spurs’ title hopes after his team dropped points at home to Wolverhampton Wanderers, but their challenge was far from over as they prepared to head north.

“I’ve never said to anybody that we are going to win the league,” the manager insisted after Wolves keeper Wayne Hennessey had kept his team at bay.

“I know where we are at and if we can get a Champions League position again this season it will be great for us.

“I only answered their question of if it is possible and of course it is possible. Man City and Man United will be red hot favourites to win the league but if we had a fantastic run in the second half like we have had in the first half of the season it could happen.”

Spurs were forced into one change against City, with Adebayor unavailable against his parent club, and made another voluntarily as captain Ledley King returned from injury to take the place of Michael Dawson.

The midfield partnership of Luka Modric and Scott Parker remained intact – the only season the pair had together – while Jermain Defoe stood in for Adebayor with Van der Vaart in the number 10 role.

City were unchanged from their win at Wigan, which meant no place in the starting line-up for Mario Balotelli despite the Italian having scored 11 goals before the end of the year.

It didn’t seem to matter to the hosts, as a quickfire double just before the hour mark looked to have put them in control.

Samir Nasri ran onto an inch-perfect pass from David Silva to slam the opener past Brad Friedel, and the former Arsenal man turned creator soon after as his corner was bundled over the line by Joleon Lescott.

However, in a moment which would end up foreshadowing City’s final-day victory over QPR, a defensive misjudgement let the opponents back into the game.

While Lescott would be the man to blame against the R’s, this time it was the fault of his defensive partner Stefan Savic as the Montenegrin’s header fell short of Joe Hart and allowed Defoe to steal in and score after rounding his England colleague.

Five minutes later, and less than 10 after Nasri’s opener, Spurs were level through one of those special Bale finishes we’d all got very accustomed to.

The drama wasn’t over, though. Enter Balotelli, primed and ready to take charge of the narrative.

When we talk about incidents which would have gone down differently without VAR, other games might be mentioned before this one.

However, there’s no denying Balotelli’s stamp on Parker would at least have been looked at, if not acted upon.

The former Inter man was off-balance after hitting a shot from range which the Spurs midfielder blocked. With Parker going to ground, and Balotelli regaining his balance, the City forward’s boot made contact with his prone opponent.

Then he caught him again. On the head.

“I’m the last person to talk about getting people sent off, but it’s blatantly obvious – Scott’s got a lovely cut on his head,” Redknapp said after the game.

“When he catches him first time, you think it could be an accident, but the second one he kicks him, ­back-heels him straight in the head.”

Spurs felt Balotelli should have been sent off before his winner
(

Balotelli was already on a yellow card when the incident with Parker took place, so he could easily have been dismissed even if referee Howard Webb had seen the incident and simply deemed it dangerous but not necessarily deliberate.

Had that been the case, he wouldn’t have been on the pitch in stoppage time to rub further salt into Spurs’ wound, just moments after Defoe came inches away from completing a sensational comeback.

It was Balotelli himself who won the penalty, going down under King’s challenge, and he got straight back up for the all-or-nothing spot-kick deep into added time.

In moments like this, you need a calm head, and his explanation left no one in any doubt that he was the right man for the responsibility.

“I felt nothing,” Balotelli said.

“I was calm like I am every time I take a penalty. It’s good and I have only ever scored.”

Balotelli gave Brad Friedel no chance from the spot
(

As for the stamp, Balotelli protested his innocence, even after being slapped with an FA charge.

“I have accepted the ban because I couldn’t prove my innocence,” he said. “But I’m not a villain or violent. I didn’t try to [place my] heel [on] Parker.”

The subsequent ban saw Balotelli miss three league games, including a painful defeat against Everton, but that was no consolation to Spurs.

Redknapp’s team briefly rebounded, earning seven points from their subsequent three games, but there was no more margin for error, and a 5-2 defeat to Arsenal in February sent them into a tailspin.

Before the game against City, they had been 10 points clear of Arsenal and were looking certain to finish above their neighbours.

Instead, a return of just 23 points from their final 17 games brought about a fourth-place finish, with Chelsea’s win in Munich in May denying them Champions League football altogether.

City’s biggest moment came a little later, with another 3-2 win against opponents from the capital making them champions by the narrowest of margins.

However, that wouldn’t have been possible without the Spurs game, and City supporters will forever remember how close they came to what could have been a fatal setback.