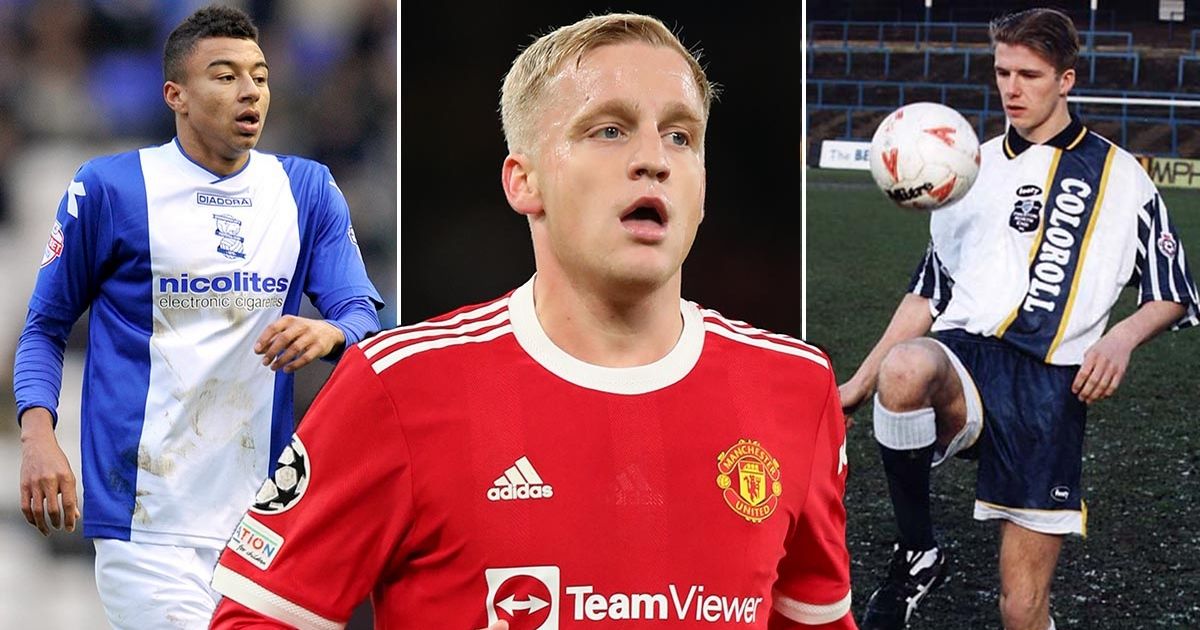 Donny van de Beek is rumoured to be unhappy with life at Manchester United as Ralf Rangnick’s reign has provided the Dutchman with as much joy as Ole Gunnar Solskjaer’s did.

Signed for £40m in the summer of 2020 from Ajax, Van de Beek was tipped by many to do great things at Old Trafford but his stint so far has been an undeniable failure.

The Netherlands international has found game time at United particularly hard to come by under both of the managers he has played under and as a result is keen on ending his Old Trafford nightmare, even temporarily on a loan deal elsewhere.

Fellow Premier League outfit Crystal Palace have thrown their hat in the ring to take on the midfielder for the rest of the campaign, while Valencia presents the chance to ply his trade in a new league abroad.

HAVE YOUR SAY! Should Donny van de Beek leave United on loan? Comment below

Some may interpret Van de Beek leaving on loan as the beginning of the end of his United career, but there are a number of Red Devils stars that have seen a spell away from Manchester benefit them in the long-run.

Mirror Football has identified eight players who have seen a short stint elsewhere do wonders for their time as a United player.

One of England’s most iconic footballer’s only made five appearances for Preston North End back in the 1994/95 campaign, but Beckham more than made an impression.

The future Three Lions skipper scored directly from a corner on his debut before notching what would go on to become his trademark – a delightful, curling free-kick.

Beckham has since gone on the record and discussed how beneficial the move was for him, though he wasn’t as upbeat at the time.

“I was shocked. I thought it was a sign that a club was trying to get rid of a player!,” United’s former number seven explained when reflecting on his time in Lancashire.

After returning from Preston, Beckham wrote his name into Red Devils folklore by winning six Premier Leagues and one Champions League on top of a number of other domestic honours.

A promising shot-stopper, Foster enjoyed two respective loan spells at Vicarage Road with the Hornets while on the books of United over the course of two seasons between 2005 to 2007.

While ultimately Foster did not reach such dizzy heights, he did return to Old Trafford and play a crucial part in two League Cup victories for the Red Devils in the 2008/09, 2009/10 seasons respectively.

The ‘keeper would go on to join Birmingham City and win the same competition in his first season at St. Andrew’s.

Gerard Pique up against Ronaldinho while on loan at Real Zaragoza

Purchased from Barcelona, Pique struggled in the early stages of his Premier League stint and as a result was offered the chance to revive his career back in Spain with Zaragoza.

“The evidence for his quality has always been there,” said Sir Alex Ferguson. “We had to give him more time to develop. Fortunately, this is something both he and his parents understood.”

And develop he did, Pique’s displays were the early signs of what many would go on to see in the colours of Barcelona who wasted little time in re-signing him.

The Catalan giants brought him back to the Camp Nou for £5m in 2008 on a four-year deal that would coincide with one of the most illustrious spells in Barcelona’s history.

Tom Cleverley won Watford’s player of the season in 2010

Much like fellow United loanee Foster, Tom Cleverley’s career was revitalised after a spell with Watford that saw him enjoy some of the best goal-scoring form of his career.

11 goals in 33 appearances for the Hornets was enough to earn the midfielder the title of Watford’s joint top-scorer and Player of the Season.

Cleverley bagged a goal on his debut and barely looked back during a loan spell that he admitted was the making of him not only as a player but also as a person.

“I’d never cooked or washed clothes before,” he recalled.

“Becoming more independent put me in the real world and that was a side of going out on loan that people don’t always understand.”

Cleverley currently plies his trade for Watford on a permanent basis.

Jesse Lingard scored four on his debut for Birmingham City

Of course when you think of Lingard and loans the first deal that springs to mind is his stellar stint in east London with West Ham United.

However, the England international actually enjoyed half a season at St. Andrews during which time he delivered one of the most memorable debuts in the club’s history.

Lingard scored four times against Sheffield Wednesday in what were his first ever goals at senior level.

Lee Clark was at the helm at the time and praised Lingard’s attitude, something he felt was synonymous with every player employed by United.

“Jesse’s work ethic, on top of his other ability is ridiculous,” said Clark. “Like every United player I’ve had.”

Welbeck has since gone on to become somewhat of a journeyman striker in the latter stages of his career after spells at Arsenal, Watford and Brighton since leave United on a permanent basis in 2014.

However, while still on the books at Old Trafford Welbeck enjoyed a stint at the Stadium of Light with the Black Cats thanks to a United legend in Steve Bruce who was managing the North-East club at the time.

Sunderland secured a top-half Premier League finish during Welbeck’s stint in a season that included a stunning 3-0 away win over Chelsea.

Much like Cleverley, Welbeck has admitted the move helped him grow as a human.

“I grew up there,” admitted the England international. “It was a good experience, a learning curve and a pivotal point in my career because it was the first time I went out on loan in the Premier League.”

Smalling spent just under a decade at Old Trafford before upping sticks to Italy in the summer of 2019 to join AS Roma on loan.

The central defender impressed hugely while in Roma on a temporary basis and actually made history to become the first English player since fellow former Red Beckham to score at least two goals in the same Serie A season.

Just months into the following season, Smalling made the switch permanent on a three-year deal that saw United pocket £15m, a figure that would potentially rise to £20m including add-ons.

The second shot-stopper on this list, Henderson was near-faultless during the Blades only successful season in the Premier League under Chris Wilder.

Sheffield United enjoyed a stellar campaign after sealing promotion to the top-flight and did so with Henderson between the sticks.

Once he returned to United for the 2020/21 season, Sheffield United were relegated but Henderson’s stock continued to rise as he pushed David de Gea for the number one spot at Old Trafford.

He has since been the subject of speculation over a permanent departure after losing his starting place to De Gea for the 2021/22 campaign.