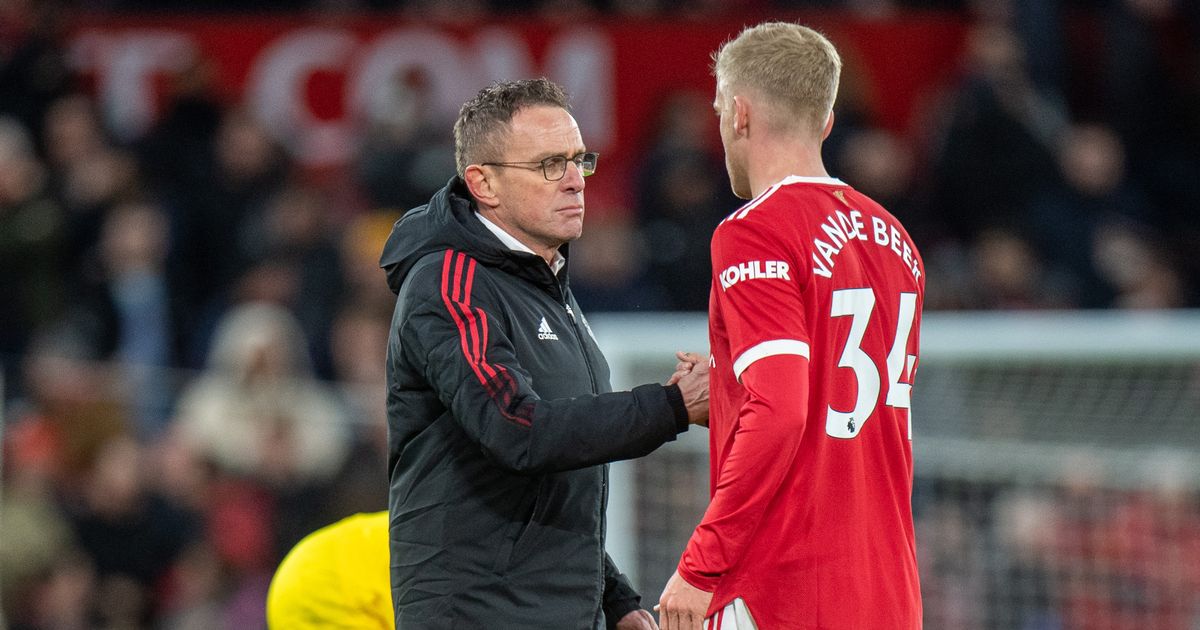 Manchester United are thought to be reluctant to sanction Donny van de Beek’s departure on loan – despite their reasoning directly contradicting previous comments made by Ralf Rangnick.

The Old Trafford hierarchy are thought to be against the idea of allowing the former Ajax star to leave on a temporary basis for the second half of this season due to fears their squad could become stretched at any point.

Crystal Palace have expressed an interest in bringing Van de Beek to Selhurst Park for the next six months, while La Liga outfit Valencia have also thrown their hat in the ring.

United have had to deal with the impact of back-logged fixtures as a result of Covid-19 wreaking havoc on the Premier League fixture list and are fearful of a similar situation occurring towards the tail-end of the season.

HAVE YOUR SAY! Should Man Utd let Van de Beek leave on loan? Comment below

The Red Devils saw fixtures against Brentford and Brighton postponed due to a rise in Covid-19 cases within their own camp and are well aware the same problem could rear it’s head at a pivotal stage of the current campaign, according to The Athletic.

As a result, those at the top of United want to keep hold of the rest of their playing squad until at least the end of this season to ensure they have enough to call upon should they need to.

Not only does this spell bad news for players clearly surplus to requirements like Van de Beek, it also goes against comments made previously by interim boss Rangnick.

The German has discussed a number of times how he has inherited a bloated squad from predecessor Ole Gunnar Solskjaer and has struggled to keep all of his many fringe players happy.

It is not just Van de Beek that is likely to suffer as a result of United’s tendency to hoard players, with Jesse Lingard also likely to miss out on a move to Newcastle this month as the Red Devils want him on the books until his contract expires in the summer.

The bulk of Rangnick’s short reign in the United hot-seat has been littered with reports of unrest from within the dressing room.

At one point, United were thought to be in possession of as many as 16 players who wanted out of Old Trafford.

The bulk of that friction is rumoured to stem from the fact so many are without a decent number of first team minutes under their belt, whether that be during Solskjaer or Rangnick’s tenure.

In spite of all of this, United are expected to stand firm for the remainder of the window and make Anthony Martial’s loan spell at Sevilla the last departure of the month.