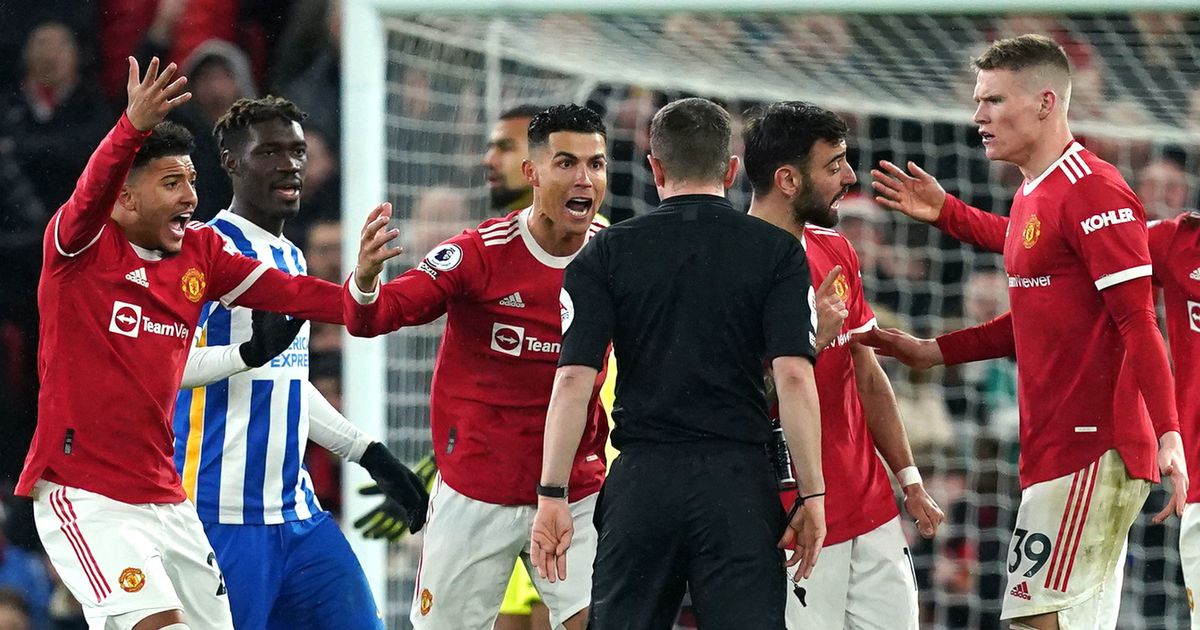 Manchester United could face a Football Association charge after their players surrounded referee Peter Bankes ahead of Lewis Dunk’s dismissal at Old Trafford on Tuesday night.

Bankes initially booked Dunk after he had pulled down Anthony Elanga but United stars reacted furiously, mobbing Bankes – refereeing only his eighth Premier League game of the season – and delaying the free-kick.

The protests against Bankes’ decision were led by captain Harry Maguire and Bruno Fernandes, who was booked for the ferocity of his complaints.

Eventually, the VAR, Aussie ref Jarred Gillett, told Bankes to go and look at the pitch side monitor and, inevitably, the referee upgraded the card to a red.

Bankes’ initial decision was clearly based on the thought that Brighton ’s Adam Webster was a covering defender and it was not an obvious goalscoring opportunity that had been denied.

HAVE YOUR SAY : Should Man Utd be punished for their reaction? Let us know in the comments below.

And Graham Potter clearly thought the VAR and the referee were influenced by the scale of United players’ protests.

“I don’t blame them (the United players),” said the Brighton manager. “They have to do their bit for the team. But you need the referee and VAR to make the calls independently.

“It was a yellow card live, Webster was there on the cover. It is not clear and obvious and I did not understand the intervention.”

The intervention came as Maguire charged from his central defensive position to lead the United arguments.

Cristiano Ronaldo, Jadon Sancho, Scott McTominay, Fernandes and Elanga also confronted Bankes, who has spent part of this season officiating in the Championship.

If Bankes says in his report that a yellow card for Fernandes was sufficient punishment, United could escape censure.

But the FA could still charge the club with failing to ensure their players conducted themselves in an orderly fashion.

Arsenal were recently hit with a £20,000 fine when players protested against Gabriel’s dismissal in the home loss to Manchester City.

It was not long ago that clubs were told they would face sanctions if anyone other than the captain approached the referee.

That regulation seems to have been long forgotten but I understand there is increasing concern amongst the authorities that player dissent is on the increase.

And scenes such as the one at Old Trafford when the United mob protested against Bankes’ initial decision will only increase those concerns, even if United escape a punishment this time around.