Leicester City are Premier League's 'best of the rest' outside big six. How good can they be?

Let’s attempt a small exercise. For each of the last five full Premier League seasons, and for each club that isn’t among England’s six richest and most powerful (Manchesters City and United, Liverpool, Chelsea, Arsenal, Tottenham Hotspur), let’s award five points for the top finisher in a given year, four for the second-highest, etc., down to one point for fifth.

Doing so gives us the following leaderboard: Leicester City 16, Everton 14, Southampton 9, Wolves 9, Burnley 7, West Ham United 6. That’s a pretty good gauge of overall club health and vitality, isn’t it? Southampton and Wolves are truly intriguing clubs, Everton’s usually decent and Leicester, the only club from outside of the Big 6 to win the league in the last 25 years, tops the list. Granted, Burnley are struggling so far this season, but those other clubs make up the “non-royalty top five.”

Since your placement in the overall table is significantly dictated by how many of the “Big Six” have their respective acts together, there have been recent seasons in which the best team in this group finished seventh overall. But in 2020-21, Arsenal is five points from the relegation zone, the Manchester clubs have only 11 wins in 23 matches and Southampton, Leicester and Everton are currently third, fourth and fifth in the table.

Leicester City missed an opportunity to rise to second on Wednesday, dropping a 2-0 decision to Everton, but they’ve once again started the season well. They’ve beaten Arsenal and City, plus Best of the Rest rival Wolves, all while easily qualifying for the knockout stages of the Europa League. (They’re currently one of 11 teams with between a 5% and 11% chance of winning it, according to FiveThirtyEight.)

The Premier League field is crowded, though — Leicester are five points from both first and 10th, with Chelsea and both sides of Manchester lurking in the rearview. It’s difficult to know how much staying power the Foxes might have, but they’ve been here before. They are also close to being at full-strength for the first time since September, and just in time for a really, really big week of matches.

So let’s break it down. Just how good are Leicester? And how good is their manager, Brendan Rodgers?

From the moment said concoction failed to produce similar results the next year, the club seemingly set about taking its winnings — the money from a run to the 2016-17 Champions League quarterfinals, plus lucrative sales of N’Golo Kante in 2016 (to Chelsea), Danny Drinkwater in 2017 (Chelsea), Riyad Mahrez in 2018 (Manchester City), Harry Maguire in 2019 (Manchester United) and Ben Chilwell in 2020 (Chelsea again) — and building the infrastructure for a true, modern, possession side.

* Stats Perform defines direct speed as the average speed of ball movement towards the opponent’s goal line during a given sequence. It’s a nice, useful measure of verticality.

After manager Claudio Ranieri was dismissed in early 2017, first Craig Shakespeare (and, later, Claude Puel) attempted to modernize the Foxes, but neither coach could produce huge results. The club didn’t take any resounding steps forward until hiring Rodgers in February 2019. They earned 17 points from their last 10 matches of 2018-19, then exploded for 38 in their first 16 matches of 2019-20. They were in the Champions League hunt until almost literally the final minute of the season, only to finish fifth.

Part of their success stems from the simple fact that Rodgers is a really good manager. He nearly brought Liverpool a Premier League title in 2013-14, and while his Merseyside tenure was disappointing after that, he moved on to Celtic and nearly won a treble of trebles: his team won the Scottish Premiership, Scottish Cup and Scottish League Cup in both 2016-17 and 2017-18 — they also drew twice with Manchester City in Champions League play — and were on the way to doing so again in 2018-19 before Leicester came calling.

Rodgers was perfect for a club like Leicester. He’s got possession principles — in five full seasons in the Premier League, his teams have never had a possession rate under 55% or averaged fewer than 5.1 passes per possession — but he’s also tactically flexible. Stats Perform has logged 13 different starting formations for Rodgers’ Leicester since he arrived, from his most commonly-used 4-1-4-1 to rarities like a 5-4-1 or 3-1-4-2. (Granted, he was perhaps too flexible at Liverpool at times, moving quickly between potential tactical solutions when things began to go sour in 2014-15, but he has proven he can maintain certain principles while adapting to the talent at hand.)

That flexibility has paid off. In Rodgers’ best moments with the Foxes, Leicester has been two different teams at once. Their possession rate was the highest of any non-Big 6 team, and the fourth-highest in the Premier League overall, last season, while their forward pass rate of 32.9% was the lowest. But pure activity levels created opportunities; they led the league in allowing only 9.6 passes per defensive action and began seven possessions per match in the attacking third. This helped to spring one of the best vertical attackers in the Premier League: Jamie Vardy scored 23 goals in league play last season, his most since scoring 24 in the 2015-16 title run.

Rodgers has had to adapt further this season

Due to some combination of conscious load management — the crowded schedule means lots and lots of rotation to avoid burnout — and an injury to midfielder/chaos agent Wilfred Ndidi, Leicester has backed off the pressure. Their possession rate is down a smidge (to 54%) and they’re allowing 13.9 passes per defensive action, 11th in the league. They’re both averaging and allowing more passes per possession, and without as many counter-attacking opportunities, they’re frequently attempting to move the ball around midfield and attempt sudden verticality in open play.

Of the 24 goals they’ve scored this year, only two came in the immediate seconds after a turnover. But 11 have come from either situations in which Leicester suddenly moved the ball from midfield into the box with quick, aggressive passing combinations, or penalties that resulted from such moves. This is the Vardy sweet spot — he’s scored three of the six vertical goals, and he’s the primary penalty taker. In their more languid open-play moments, they are an attacking democracy; in these vertical thrusts, Vardy’s the man.

This slow-slow-slow-QUICK approach has given Leicester a strange combination of possession-friendly numbers and the low-quantity, high-quality shot profile of a counter-attacking squad. 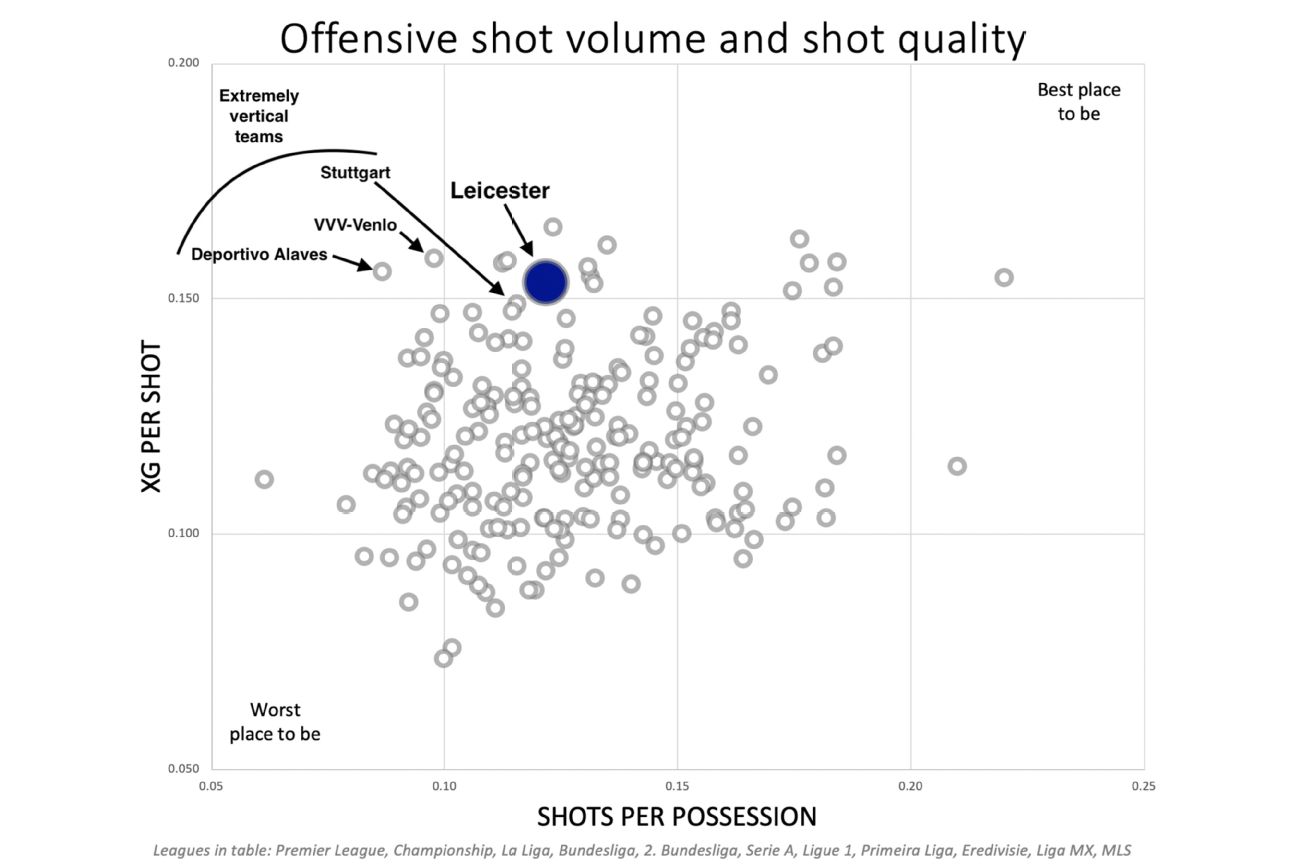 This is certainly interesting and fun, but is this a sturdy long-term approach? We’ll see.

One of Leicester’s biggest strengths and weaknesses last year was how much of their attack ran through Vardy. He was incredibly prolific, but if Vardy wasn’t scoring, Leicester weren’t winning. The Foxes earned 40 points from the 16 league matches in which he scored last season, and pulled only 22 from the 22 he didn’t.

Vardy didn’t get any obvious help when Leicester went defense-heavy in the offseason — their big signings were 19-year old Saint-Étienne central defender Wesley Fofana from Saint-Étienne and 25-year old Atalanta fullback Timothy Castagne — and thus far, Leicester have won in each of seven matches with a Vardy goal but have managed just three points in six games without. Against Everton in midweek, Vardy attempted three shots worth 0.5 xG, had two blocked and sent a header straight at Toffees keeper Robin Olsen; the rest of the team could only match him, generating 0.5 xG and one shot on goal. Not good enough.

Ndidi has returned to the lineup, at least; he’s played 171 minutes in the last three league matches, and Leicester City has earned 12 points from his five league matches this season. Combined with a pause in the Europa League schedule, his presence could contribute to an increase in defensive intensity and a move toward last season’s identity. (Leicester’s PPDA is 10.4 when Ndidi plays in 2020-21.)

It will be interesting to see if Rodgers attempts to ramp up said identity with two huge matches in the coming week. His more conservative approach has worked out alright, with the Foxes allowing only 1.3 goals per match, seventh in the increasingly prolific Premier League, but you could make the case that they’ve been a bit lucky, too. Opponents are generating 1.54 xG per match, and Leicester aren’t really stopping opponents from taking either a high quantity of shots (0.13 shots per possession, ninth in the league) or high-quality shots (0.13 xG per shot, 11th).

Opponents are actually finishing more possessions in the attacking third than Leicester are, too. No one generates the shot quality that Rodgers’ side can, but if they don’t limit opponents’ opportunities, that might catch up to them soon, especially against better opponents. It certainly did against Everton.

Rodgers’ chosen approach last season was a mostly rousing success against teams outside of the Big 6, but in 10 matches against Big 6 clubs that aren’t Arsenal (I mean there’s not much “big” about the Gunners at the moment), they managed just five points and got outscored 20-7.

They’ve split two such contests this season — a 5-2 win over City and a 3-0 loss to Liverpool (both without Ndidi) — but they visit Tottenham Hotspur on Sunday, then welcome Manchester United to town next Saturday. This is the biggest week of the season for the Foxes, and they approach it coming off of a loss.

In its club soccer predictions, FiveThirtyEight gives Leicester an 18% chance of finishing in the top four, highest of any club outside the Big 6 and sixth-best odds overall. That only reinforces the trickiness of the expectations game. Rodgers is proven and effective, and Leicester City has as much to offer of any club outside of the ruling class. But if something greater than “Best of the Rest” is in store in 2020-21, we might know it after the next two matches.