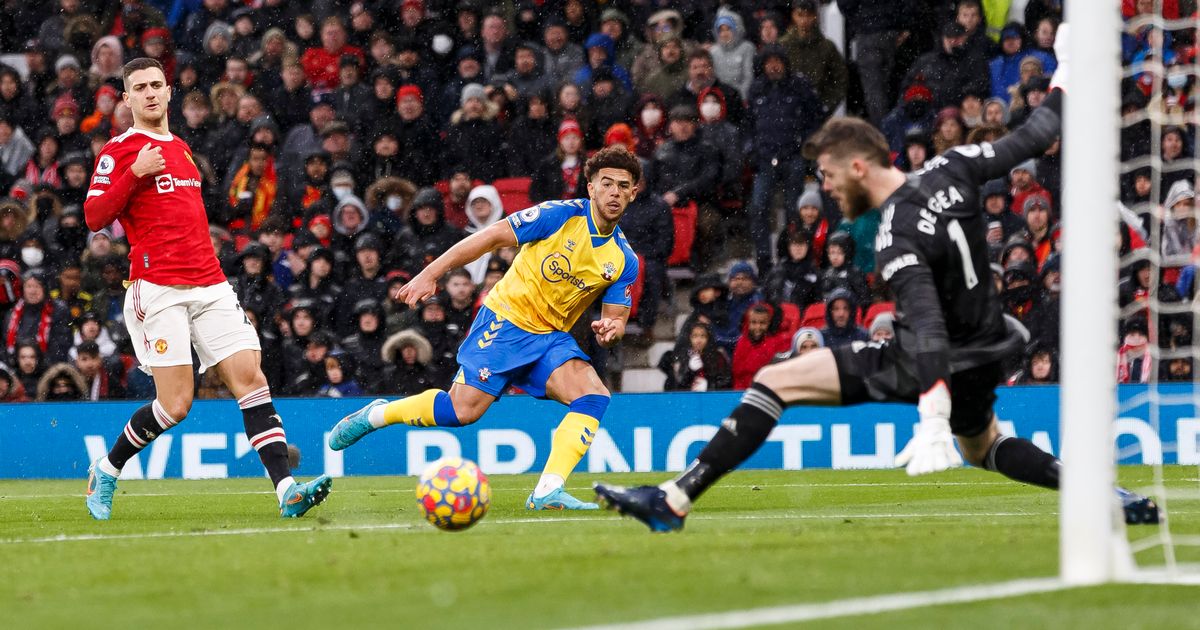 David de Gea blamed a ‘curse’ for Manchester United’s inability to win trophies over the past few years, but the Spaniard has been asked to look closer to home for the issues at Old Trafford

Manchester United failed to bounce back to winning ways against Southampton on Saturday, and Glenn Hoddle has blamed David De Gea for the 1-1 draw.

Jadon Sancho opened the scoring for the Red Devils in the 21st minute when the England international tapped home from close range after Marcus Rashford broke free down the right and squared the ball across the face of the goal.

But Ralf Rangnick’s men were unable to hold onto their lead and the Saints equalised early in the second half.

Mohamed Elyounoussi slipped the ball into the path of Che Adams, who curled a neat finish into the far corner past De Gea.

Che Adams scored the equaliser for Southampton just after half time

Former Tottenham Hotspur manager Hoddle told BT Sport that he thought the Spanish shot-stopper should have done better to prevent the ball from finding the back of the net.

Speaking of the equaliser, he said: “They’ve opened them up fairly quickly. Where United’s defence have gone I don’t know.

“It’s a really good finish. I thought to myself he must have curled it around De Gea. I saw it again, what De Gea’s going in with his feet for in those circumstances I don’t know.

“If he lays down and goes across… He makes a lot of good saves with his feet, De Gea, if it’s reactions from a six-yard box shot or a corner.

“What on earth he’s going with his feet for in that angle, I don’t understand that as a goalkeeper. If he lays down he lays his legs on the near post and he’ll save it.”

Adams’ strike ricocheted off of the post before trickling over the line, which led Hoddle to believe it was a great finish by the Scotland international.

He concluded: “I thought at first what a finish, how did he get that round him? Second time I saw it, I saw the reason why.”

United remained in fifth place in the Premier League with the hard-earned point at Old Trafford, though they could quickly drop down into seventh if Arsenal and Tottenham win their games in hand.

Jadon Sancho continued his good form against the Saints

However, Luke Shaw is adamant that it was not his goalkeeper to blame for the result.

Instead, the left-back believes that his attacking teammates should have put the game to bed in the first half.

The 26-year-old told Match of the Day: “History is repeating itself again. We started really well the first 20 minutes, got the goal and it just happened again. We know it’s not good enough and it needs to change quickly.

“If we take our chances early in the game it’s a different story. We know we need to get better. We can’t over-think it. We want to get in the Champions League and it’s not good enough and there’s no way we will get in Champions League if we keep dropping points.

“The most important thing at the moment is results. It’s about picking up the points and we need to be climbing the table.”

It remains to be seen how Rangnick can change the fortunes of United ahead of their match against Brighton on Tuesday night.