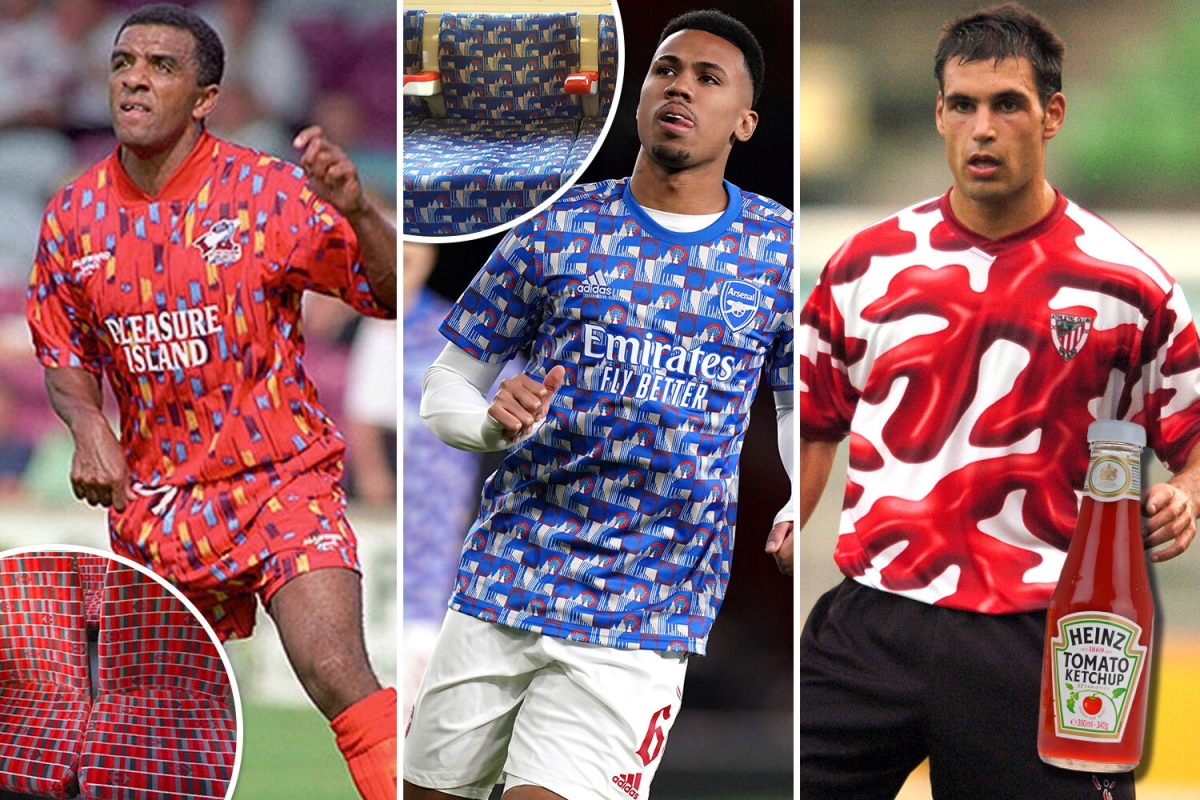 ARSENAL have gone underground for their new kit – and copied the blue and white seat pattern from the Piccadilly tube line which runs past their Emirates Stadium in North London for their pre-match strip.

The design has met with mixed feelings from fans, with one likening it to “dusty train seat covers”. But it could have been worse – here we show how other clubs have been torn off a strip by fans for design kit-astrophes ranging from chewy sweets to spilt ketchup.

FOOTBALL kit designers have been inspired by public transport for decades, it seems. This 1992 strip belonged to Scunthorpe United and featured a geometric pattern that was just like the seats on the local buses. Luckily for fans, it was only a short wait until another one came along . . .

CHELSEA were ribbed for their 2019/20 strip, worn on the right here. Social media users compared it to a Stagecoach bus seat. Not quite the transport the elite players are used to.

MANCHESTER United were another club that caught the bus bug. When they unveiled the home kit for the 20/21 season, bosses were torn to shreds by fans on social media.

The club’s signature red kit featured small yellow and black rectangles that looked like a bus seat – and was swiftly ditched.

WHAT do Norwich City FC and Subway have in common? Apart from the fact that they both make the odd sub, they also share a colour scheme.

The Canaries have sported a yellow and green strip since the club chairman – a canary breeder – took it over in 1907.

It’s just unfortunate that the players now get likened to a fast food wrapper.

THIS season Liverpool fans were quick to liken the club’s third kit to fast-food clown Ronald McDonald’s outfit. Besides the yellow top with red detailing, in promotional shots the players posed in front of red and white checks. Even McDonald’s tweeted: ‘OMG I love your top, where did you get it’. But not everyone was lovin’ it.

IN another fast food fiasco, Southampton’s 2015/16 kit was likened by fans to a KFC takeaway bucket.

However, the Saints’ red and white kit goes back a lot further than the US food chain. The football team started in 1885, whereas Colonel Sanders didn’t start flogging fried chicken in Kentucky until 1952.

TO mark Athletic Bilbao’s centenary, in 2004 the Spanish club invited an artist to design a strip based on art in the city’s Guggenheim Museum.

Meant to signify a splatter of blood, the shirt was likened more to a splash of ketchup.

Here Javier Casas is trying to play football while looking like he should be accompanied by a chip. It was only worn for one tournament before it was benched.

MAN City legend Sergio Aguero loves his fashion and tends to dress in top brands such as Balenciaga or Gucci. So he and the rest of the squad were ridiculed for this 2019 pink and yellow kit which fans likened to old-fashioned sweets. Were they Drumstick lollies? Or Fruit Salads? Or Rhubarb and Custards? Hard to chews . . .