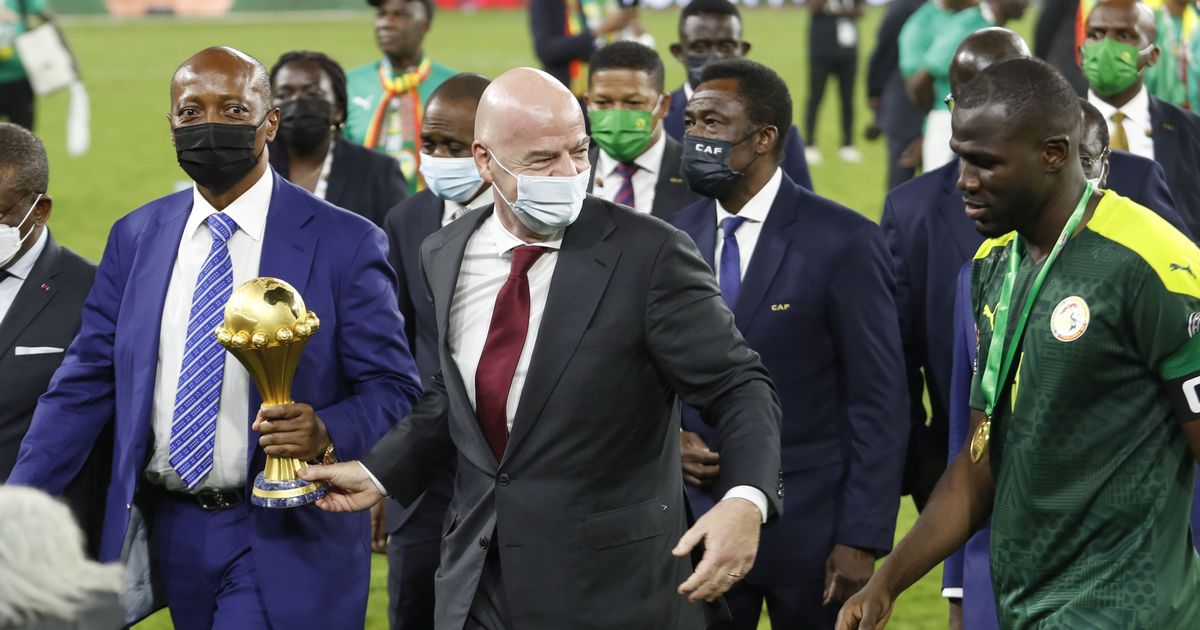 Gianni Infantino explains reasoning behind expansion of the World Cup

FIFA president Gianni Infantino was at the centre of a farcical episode as Senegal were made to wait to lift the Africa Cup of Nations trophy.

Sadio Mane scored the winning penalty in a shootout to sink Egypt and fire Senegal to their first ever continental title on Sunday night.

There were emphatic celebrations for the triumphant team as the Liverpool forward rifled into the bottom corner from 12 yards, but he also took time to console club teammate Mohamed Salah.

When the time came to present the trophy to Kalidou Koulibaly, there was confusion as Infantino led the Senegal captain away from the podium and towards the stands.

The FIFA supremo, who was helping to carry the AFCON trophy, only allowed Koulibaly to get his hands on it once he had exchanged pleasantries with Cameroon president Paul Biya.

Was Gianni Infantino wrong to interfere with the trophy presentation? Have your say in the comments…

The Napoli defender appeared to ask for the right to lift the trophy with the rest of his teammates, who were still assembled in the centre circle.

In a touching moment, Koulibaly arrived back on the pitch with his prize in his grasp and began to steer Senegal’s players and staff so they would all be a part of the joyous moment.

After a brief discussion with manager Aliou Cisse, who appeared to turn down the chance to lift the trophy together, Koulibaly hoisted the trophy above his head and party poppers burst out from behind the podium.

Many fans on social media suspected Infantino’s interference in the trophy presentation was further evidence of his efforts to increase FIFA’s influence over the Confederation of African Football (CAF).

The 51-year-old has been pushing for a so-called African Super League as well as a radical shake-up of the international football calendar which would see the World Cup take place every two years.

European governing body UEFA are strongly opposed to the idea, so CAF will be of vital importance as Infantino and former Arsenal manager Arsene Wegner, now FIFA’s head of global football development, push forward with the controversial plans.

Kalidou Koulibaly returned to the pitch to lift the trophy with Senegal’s players and staff
(
Advertisement. Scroll to continue reading.

Meanwhile, Infantino was heavily criticised earlier during AFCON for his comments on how African migrants may affect a biennial World Cup.

“We need to give hope to Africans so they don’t need to cross the Mediterranean in order to find, maybe, a better life but more probably death in the sea,” he said.

In response, Kick It Out chief executive Tony Burnett said it is “completely unacceptable to suggest that a biennial World Cup, predominantly set up to drive further profits for FIFA, could be a solution for migrants who risk their lives, sometimes fleeing war-torn countries, to seek a better life”.