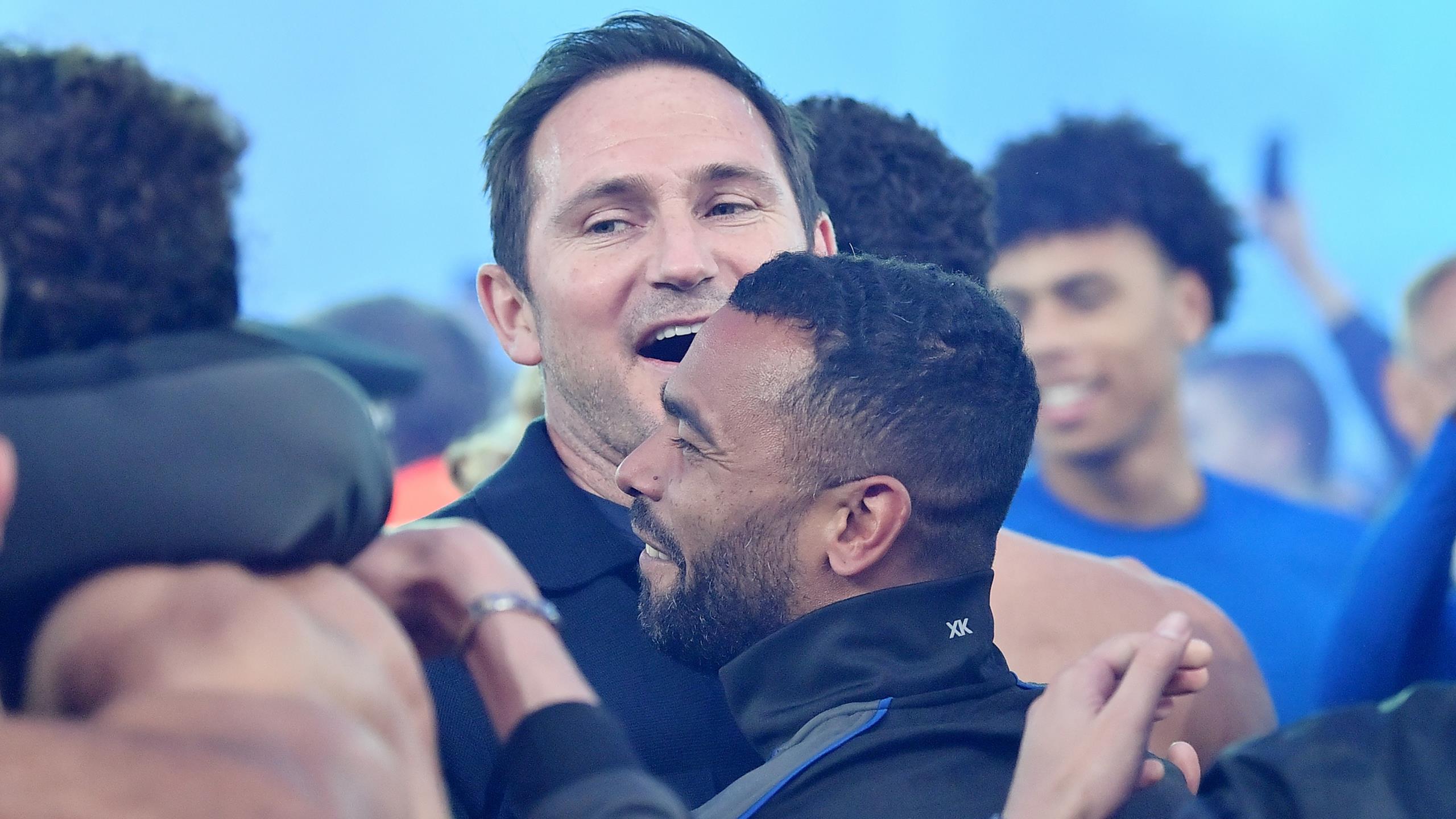 When Frank Lampard took over, Everton were 16th in the table. As of last night’s win over Crystal Palace, they are 16th. Still, life’s about the journey, not the destination, and having taking the scenic route into and out of the relegation zone, you can understand why Goodison Park sounded so frantically relieved.

Vieira involved in altercation with fan during pitch invasion at Everton

The story of Everton’s season has been a talented squad coalescing into something far beneath the sum of its parts. Players in good teams multiply one another’s talents; at Goodison, and particularly on the road, Everton’s players have been busily subtracting and dividing. Which isn’t to say that this is just the players’ fault. There’s plenty of blame to go around: dressing room, dugout, boardroom, scouting department. This season, Everton have flirted with a total system collapse.

And never more so than at half-time last night: 2-0 down against a team that are doing the thing that Everton should be doing, and doing it right. Palace play attractive football under an exciting new manager, and have managed both a safe midtable finish and a decent cup run. It almost felt like the footballing gods were trying to make some kind of point.

Still, if the capricious forces that rule this game love one thing more than humbling the once mighty, it’s chaos. We don’t know what Lampard said at half-time, although we do know it probably started with a serious point, went into a joke, then switched back into a serious point. “Go out there and throw yourself on the mercy of the universe, lads. Hopefully it won’t throw you back.” Pause, grin. “No, but seriously, set pieces…”

A lot of football chat seeks to explain victory and defeat in terms of who wanted it more. At times this is a kind of analytical filler, a catch-all explanation for one kind of superiority or another. Better teams usually look like they want it more, because they’re better: they get to the ball first, they know what they’re doing with it. Do Liverpool want it more, or do they just know where to stand and when to start sprinting? From the outside looking on, competence looks a lot like desire.

Everton, though. Everton wanted it. Goodison howled for it. There is much to criticise and critique in Lampard’s management, both his career so far and his short time with Everton. The defence remains a mess. The discipline trembles right on the line between what is useful and what is destructive. But he has got the squad all pointing the same way and scrapping, and he’s brought the crowd back to their club, and that’s a decent start. Decent enough to earn him the right to have a crack at something more long term, something more sensible, next season.

It probably doesn’t pay to think too closely about next season, at least not if you’re an Everton fan. Most of the underlying causes of this calamitous campaign are still in place, after all, and everywhere you look there are question marks. But at the very least, the club will have this occasion, the memories of survival. That save. That diving header. That noise. Competent football teams have been built from less.

Many years ago, some well-meaning stoner crept into a skate park in Buckingham, approached the underside of a ramp, took a can of black paint from their pocket and sprayed a message for all the world to read. NO DOPE, NO HOPE. Unfortunately the paint ran a little, and by the time it dried his inspirational message read NO POPE, NO HOPE. For a while, until it was painted over, it was perhaps England’s most overtly Catholic half-pipe. But now it seems clear. A Burnley fan from the future had come back to tell us the good news.

Flying saves, reaction saves, influential clapping, serious pointing: Nick Pope is a master of the art of being a good goalkeeper in a not-so-great team. And while the scenes at Villa Park never came close to the bedlam at Goodison Park, this too was a good result for the team battling relegation and a bad one for Leeds. Burnley go into the last day of the season with their fate in their own hands, and that will do them very nicely indeed.

It’s going to be quite a busy last day for the beloved As It Stands table. By the Warm-Up’s reckoning, it’s only Leicester vs. Southampton that has absolutely nothing riding on it. Bring some board games in, lads. Even Chelsea have to make sure that they don’t lose to Watford; that, plus a Spurs win, plus a 19-goal swing, would bump Tuchel & Co. down to fourth. Obviously that’s not realistic, but then Spurs are playing Norwich.

But each of the other eight games have something riding on them, even if some outcomes are more likely than others. City and Liverpool are fighting for first. Spurs and Arsenal for fourth. West Ham are just two points behind Manchester United, in what nobody is calling ‘The Race To Make Sure That, For You, The Words Europa And League Don’t Have ‘Conference’ Between Them’.

And then there’s the headline show: relegation. Leeds away at Brentford, Burnley at home to Newcastle. The head says that both sides will lose in straightforward fashion to obviously better teams; the heart, hopped up on Barclays, insists that something will happen, somewhere. Really, there’s only one solution. Find yourself a pub with three screens, set up two laptops, two tablets, and your phone, and settle in for a long afternoon of missing everything because you were looking somewhere else.

The Witlessness of Crowds

It’s definitely becoming a thing, right? A miserable, stupid thing. We touched yesterday on the beauty at the heart of the celebratory pitch invasion: the coming together of a crowd in mutually transgressive joy. You can see it here.

But every crowd has its percentage of clowns. Before that footage was shot, as Everton’s fans streamed onto the pitch, one of them went – phone out, naturally – to have a word with Patrick Vieira. We don’t know what the word was, but we know Vieira didn’t like it; that he started to walk away, then came back and kicked out.

Meanwhile, down at Vale Park, Swindon’s players were having to fight their way off the pitch after losing a penalty shootout to Port Vale.

As announced yesterday, the Football League are already flicking through their rulebook and looking for the harshest punishments they can find. We can presume the Premier League will be sharing notes: whatever happens with Vieira, whatever he was responding to, the league’s priority will be ensuring that no other manager gets put in that position again.

Broadly speaking, football fans misbehave as individuals but are punished as a collective: this is how the world has been made. On the pitches last night, after the games were done, hundreds of people came together to create memories that will sustain them through the rest of their football-supporting lives. They sang songs together. They wept together. And some people came looking for a scrap.

It’s worth clicking through to the whole thread above, from Accrington Stanley’s owner Andy Holt. But in summary: he reckons that over the last few seasons, the Football League has been listening, sympathetically, as he’s made the case for softening the often draconian, occasionally bizarre rules and regulations that control football fans. By his reckoning, “If you treat folk right they reciprocate.” He’s right, of course. He’s almost entirely right. But we’re betting that sympathetic ears will be in short supply this morning.

Four red cards in injury time. Four. And you know what, not a single decision was controversial.

Of course, this isn’t the first time that Everton have avoided relegation by coming back to win from two goals down against a team that play at Selhurst Park. Oh no. First as farce, then again as farce, as Marx certainly would have said if he’d been an Everton fan.

Over to the Athletic today, where Stuart James and Tom Burrows have taken a long look at the life and death of Oxford United’s Joey Beauchamp, a wonderful footballer who was sadly and strangely treated by football, and who took his own life last February at the age of 50.

His place in the wider footballing consciousness is almost entirely defined by his 58-day spell with West Ham, which first of all does a disservice to his remarkable talents. But it also serves as a cautionary and honestly rather shocking tale of how football used to treat footballers. Not just cruelty — though Billy Bonds called him “a total wimp” and some fans sent him death threats — but a broader, almost total lack of pastoral care. West Ham spent £1.2m on him, and Oxford took the money, and how Beauchamp might cope with the move doesn’t seem to have occurred to either party until it was already too late.

Football doesn’t always get it right, even now, but there is at least an awareness that footballers are thinking and feeling people and that the mind needs attention as much as the body. As Martin Allen puts it: “There’s a much better understanding of mental health, and help and support and guidance in all aspects of life, not just in sport. And that would have definitely helped Joey at the time.”

Time to start wrapping up these leagues, then. Real Madrid and Real Betis get to finish early, as do Torino and Roma. And St Johnstone are off to Inverness Caledonian Thistle for the first leg of the Scottish Premiership play-off.

And then the weekend. Tom Adams will be here on Monday with all the drama.