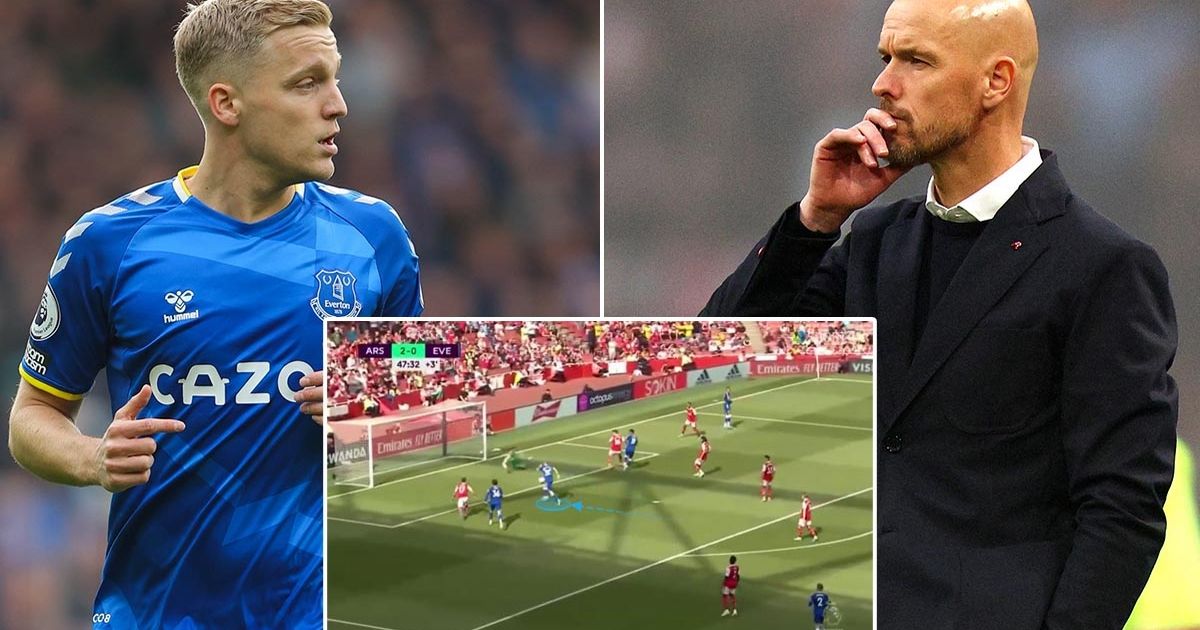 Van de Beek has struggled since arriving at Old Trafford, though with a manager who knows him well now at the helm, he could be about to show the best version of himself at the club

ten Hag: No ‘risk’ to come to Manchester United

Donny Van de Beek is almost certain to return to Manchester United to begin work under his former Ajax manager Erik ten Hag this summer. The Dutch midfielder has been on the periphery for much of his time in Manchester and was loaned out to Everton for the remainder of the season in January.

The Dutchman started brightly but then suffered from various injuries and a bout of COVID meaning he finished the campaign having made just five Premier League starts the Toffees. His last came on Sunday when he scored the their only goal in a 5-1 defeat away to Arsenal.

Despite his limited game time, Van de Beek seemed to have enjoyed his time at Goodison Park. He was seen on behind the scenes club footage getting heavily involved in celebrations after the Frank Lampard’s side secured Premier League safety with a 3-2 win against Crystal Palace and posted a classy Instagram message following the conclusion of the campaign.

He said: “I want to thank all the players, staff and especially the fans who were there in the good and tough times. Up the Toffees.”

Perhaps had a different manager come in at Old Trafford, Van de Beek may have been tempted to make his move to Goodison Park a permanent one, though with Ten Hag waiting, the 25-year-old will be itching to get back and hopefully kickstart his United career.

Van de Beek was a key player for Ajax under Ten Hag, making 175 appearances and helping the club reach the Champions League semi-final in 2019. And Ten Hag has already hinted that he can play a big role for him again now at United.

The new United boss said earlier in the week: “We had a fantastic squad in that time at Ajax. I really had a good relationship with him (Van de Beek). Of course I am looking forward to meeting him again on the pitch.”

With his return imminent, there’s growing intrigue around how Ten Hag will use the midfielder. At United so far, he’s been used predominantly as either a number ten or in a deeper midfield role, with the former over the latter being perceived as his best position prior to arrival.

This has led to a bit of a misconception that Bruno Fernandes ‘ presence had been a factor in his struggles. Yet the reality was for Ajax, Van de Beek was at his best in deeper areas of the pitch.

He’d often play either as a number eight or a number six in either a 4-3-3 or 4-2-3-1. This area of the pitch played best to his strengths. A number ten is expected to take plenty of risks, attempting a lot of ball carries, dribbles, shots and passes into the penalty area.

Van de Beek though isn’t really that type of player. He’s instead a player who can dictate tempo thanks to his technical skill, prioritising being neat and tidy on the ball but also exhibiting excellent movement and positioning without it.

The latter is a big reason why he scored so many goals at Ajax and we saw an example of the same on Sunday with his goal at the Emirates.

While goals will be an added bonus to his game at United, his quality in possession will be the biggest boost. The team has too often lacked a profile to build through, which is a point captured by the fact that their two biggest targets in terms of attempted passes per 90 were Bruno Fernandes and Cristiano Ronaldo.

Ten Hag won’t want to see his team going as direct next season, and he’s going to see Van de Beek in the heart of his midfield as playing a key role in them avoiding doing so.