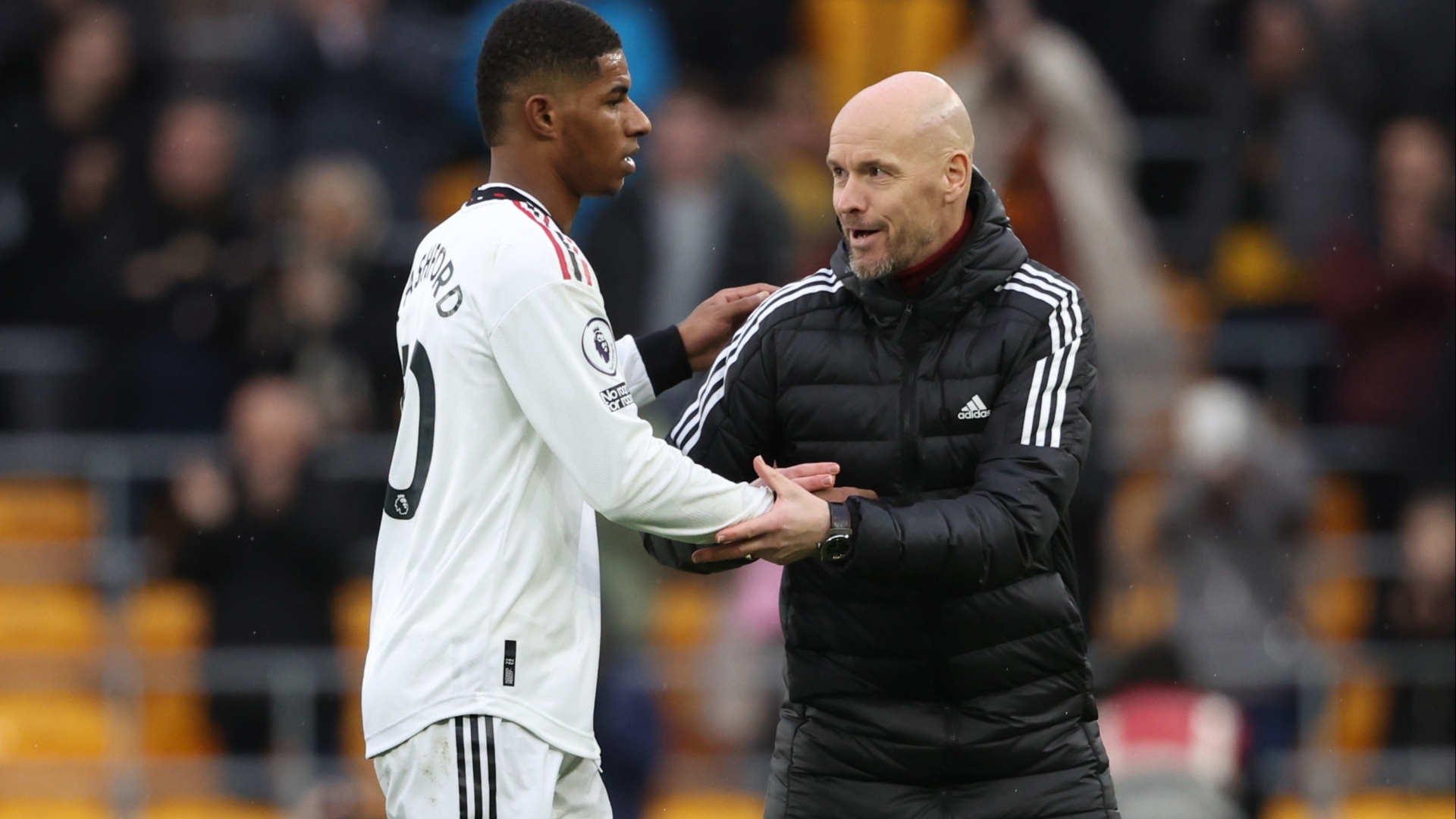 MARCUS RASHFORD has been told to stick with Manchester United and help make them the best team in the world again.

The striker has 18 months left on his contract with the club trying to tie him to a new long-term deal.

Paris Saint-Germain have already made known their interest in the in-form 25-year-old.

But Red Devils boss Erik ten Hag insists the local lad can achieve all he wants in football if he sticks with the club where he grew up.

Ten Hag said: “I hope that all our players can have interest from clubs because that means you are doing a good job, that the team is outperforming so that is what we are aiming for.

“Then, I would say this is the best place to be because we want to construct the best team, first in England, then in Europe, then in the world.”

And Ten Hag says the way he is constructing that team is perfect for Rashford and the club.

He said: “He understands Man Utd is his club, that’s first, but also, in this environment, in this team, he is playing his best football.

“He is improving and that is about him because he’s working on the good things.

“He is giving 100 per cent energy in it and he has a good plan and also in this team he can bring his qualities.

“So this team can help him be in the right position and to score goals, which he is good at. This team is constructed so that his qualities come to the fore and he knows that.

“But, definitely yes, he is important for us and if we want to get the success we want, we need him.”

They certainly would like one or two of his goals on Wednesday night at the City Ground in their Carabao Cup semi-final first leg against Nottingham Forest as he looks to add to his 17 for the season.

Of those, nine have come in the last ten games since returning from the World Cup where he scored three for England.

The Red Devils could do with Antony being on song as well after he came in for criticism during United’s 3-2 defeat to Arsenal at the Emirates on Sunday.

Ten Hag said: “He can do better.

“I see space for improvement and we want him to be more direct, but the team is performing better if he is on the pitch and that is a good thing, a good base to build further on.”

United take on Forest as they target a Wembley final against either Newcastle or Southampton and ending a trophy drought that stretches back to the Europa League triumph under Jose Mourinho in 2017.

That barren run equals an unwanted 40-year record for the club after going without silverware between their FA Cup successes of 1977 and 1983.

They have lost two finals since that 2017 triumph, in the FA Cup and Europa League, and fallen at the semi-final stage a further four times.

Ten Hag said: “It is too long that this club didn’t win a trophy and it belongs to this club to win trophies so we have to get back on track.

“It’s the best feeling you can have, winning a trophy, and I have the luck in my career to win some trophies and it’s magnificent, especially for the fans, it’s so great.

“The fans here have some experience of this, especially the older ones.

“But in this period Manchester United haven’t won trophies, it is too long ago. We are aware of that fact and we have to do it again.”

Ten Hag says his Manchester United players will be motivated by a red hot atmosphere at The City Ground in their first game there for 24 years.

Their last visit in 1999 saw the Red Devils run out 8-1 winners with Ole Gunnar Solskjaer coming on as a substitute to score four.

Ten Hag will be expecting a tighter game on Wednesday evening before a packed crowd on the banks of The Trent.

He said: “It’s a long time ago United played there and when there is a fanatical audience it is nice to play in front of.

“It will be a good atmosphere and I think it will motivate the players and we have to get ready for that.”