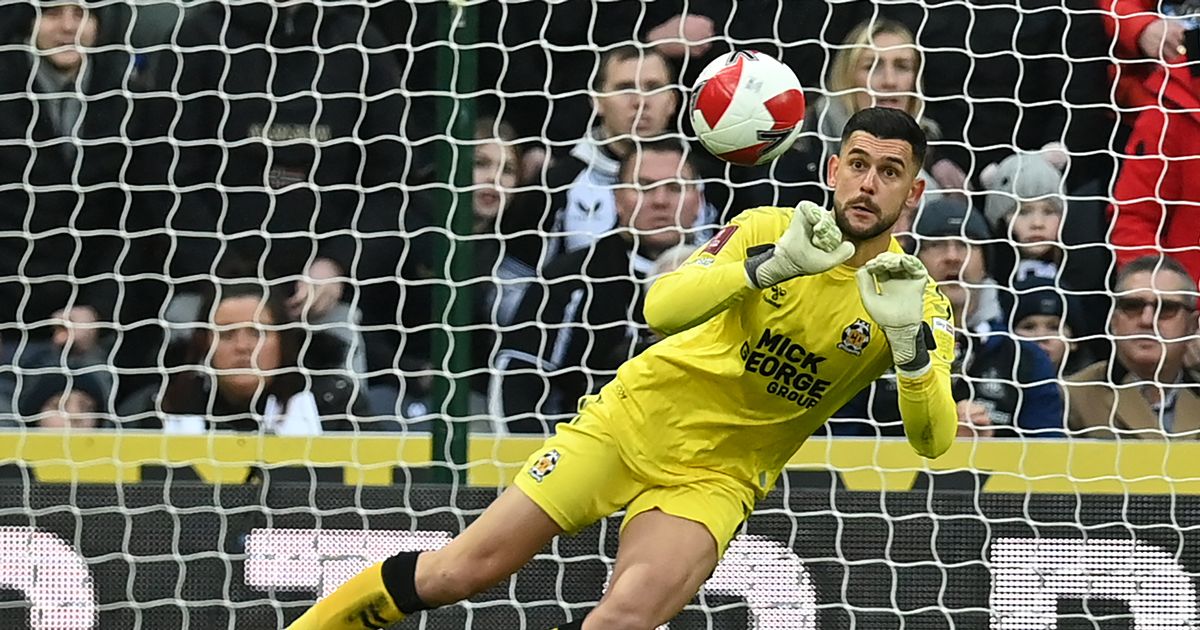 The Bulgarian goalkeeper received more than 1,000 messages after his super-show in the third round, with former Manchester United striker Dimitar Berbatov and Aston Villa royalty Stiliyan Petrov among them

Dimitar Mitov was Cambridge’s hero as they stunned Newcastle (

Among the 1,000-plus messages, after his greatest hits compilation at Newcastle, were two from Bulgarian football royalty Dimitar Berbatov and Stiliyan Petrov.

Watch goalkeeper Dimitar Mitov’s stoppage-time save to deny Toon striker Joelinton in the FA Cup third round and you’ll believe a man can fly.

They don’t normally pack the bars from Sofia to the Black Sea resorts to watch Cambridge United, but the game was shown live in his native country and the response was extraordinary.

“My phone couldn’t cope – I thought it was going to explode,” he laughed.

“It’s amazing when people of Berbatov and Petrov’s standing in the game message you to say well done. I even had some from Newcastle fans.

“But when I look back on my career, I hope that save will be the moment that changed my life. I believe it, 100 per cent.

How did I do that? Dimitar Mitov after his wonder save at Newcastle
(
Advertisement. Scroll to continue reading.

“Maybe it will lead to recognition from my national team, I don’t know. But every time there is an international break or training camp approaching and the phone rings, there is that little hope it’s the Bulgaria coach.

“If he thinks I am good enough and deserve the chance, I’m sure it will come. I’m only 25 and every player’s peak comes at a different time.

“Of course I don’t compare myself with Premier League goalkeepers of the same age – I can only look after my own journey.

“I honestly don’t think there would have been so much attention on that save if it had not been in the 95th minute, with a big Cup upset just a few seconds away.

“You know, it wasn’t the best save of my life – it wasn’t even my best save at Newcastle.”

HAVE YOUR SAY! Will Cambridge beat Luton in the fourth round? Comment here

Unbelievable: Jim Montgomery’s super double save for Sunderland in the 1973 FA Cup final against Leeds
(

When Mitov’s fingertips had diverted Jacob Murphy’s rasping shot against the bar in the first half, Geordie fans sportingly applauded his reflexes.

But after his sensational acrobatics defied Joelinton and conventional laws of gravity, with the hourglass down to the last grains of sand, the Gallowgate end just held their heads in disbelief.

It was one of the great Cup saves, up there with Jim Montgomery at Wembley in 1973, Dave Beasant’s penalty save 15 years later, or David Seaman in the semi-final at Old Trafford in 2003 – Mitov made a similar one against Burton last August.

Arsenal legend Seaman praised Mitov’s performance on a podcast, and in the Varsity city famous for students punting on the River Cam, it looks like Cambridge’s punt on a free transfer released by Charlton five years ago was inspired.

“To hear a fantastic goalkeeper like David Seaman, one of the best of his lifetime, say good things about me was a really proud moment,” said Mitov.

“But our goalkeeping coach (Martin Davies) told me, ‘You have played better than that in the League’ – and he is right, but nobody is going to talk about those games because they were not in front of 50,000 fans at Newcastle.”

Mitov was popular virtually and physically after his heroics
(

While Mitov will try to marshal another shut-out against in-form Luton in the fourth round at the Abbey Stadium, the searchlights may be focused on other ties. But the headlines may still revert to the same address.

“It’s always a happy house,” said the Bulgarian keeper with nine clean sheets this season. “It’s also a clean house – because we have a cleaner who comes in every Thursday and makes the place look tidy.

“Joe is a real players’ player, the ultimate team guy, and when we go our separate ways in football, we will always be friends.

“But we normally cook at separate times. Why do so many English people have their dinner at such a weird time? If I have my evening meal at six o’clock, I’m hungry again by nine.”