BUILDING an international team is a process.

With some countries, as soon as one World Cup ends, a side is already being prepared for the next one.

It can be a painstaking, laborious business, years in the making.

And then once the team reaches the tournament, suddenly time is speeded up. In the course of a few days teams can come together or fall apart, reputations can be made or broken.

There are many positives that Brazil can take from their first two matches in Qatar. Two wins means that the pressure is off. They can use the third match, against Cameroon, to have a look at fringe players.

Can Daniel Alves make a contribution at right back? It would be nice to get a goal for Gabriel Jesus, who only has one in his last 22 internationals, and has never been on target in a World Cup. 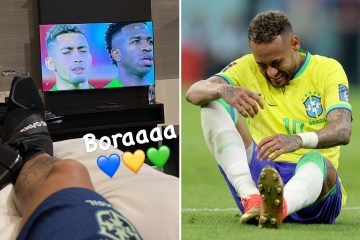 The local audience are very keen for Flamengo centre forward Pedro to be given a chance. There is another opportunity to have a look at Rodrygo of Real Madrid in the position of Neymar – important if the Paris Saint Germain star is ruled out for a number of games.

Brazil can do all of this from a position of strength, after two wins with not a goal conceded  – and not even a shot for Alisson to save.

This was planned – and the thinking began as soon as the dust had settled on the quarter final defeat to Belgium four years ago.

How had the team proved so vulnerable in that fateful first half? What needed to be done to improve matters?

Brazil realised that had made a mistake dropping Marquinhos on the eve of Russia 2018. Leaving out their quickest centre back was an error. It would not be repeated. Marquinhos was installed as the senior centre back.

But who would play alongside him? The expectation was that Thiago Silva would not last so long. Eder Militao was the man they prepared to take over.

But Thiago Silva has defied expectations and done so well that he is still first choice on merit. And with Casemiro and company shielding the back four, Brazil do not look like conceding.

All of this is the consequence of planning, of a long term process aimed at putting right the mistakes of four years ago – hard work whose effectiveness has been confirmed in the first few days of the tournament.

The added bonus has been the form at the other end of the field of Vinicius Junior. The young winger is a star with Real Madrid. But before Qatar he had not been a star with Brazil.

Where Raphinha on the other flank took instantly to international football, Vinicius Junior found it more difficult. He came into the World Cup with a single goal from 16 games.

And although he has not scored in Qatar – he had one ruled out for offside against Switzerland – he has produced his best two performances in a Brazil shirt.

Vinicius played a part in all three goals that the team have scored and has posed a consistent threat.

As Brazil go in search of World Cup win number six, the consolidation of Vinicius Junior as a potent part of Brazil’s attacking arsenal is the biggest bonus of their tournament so far.