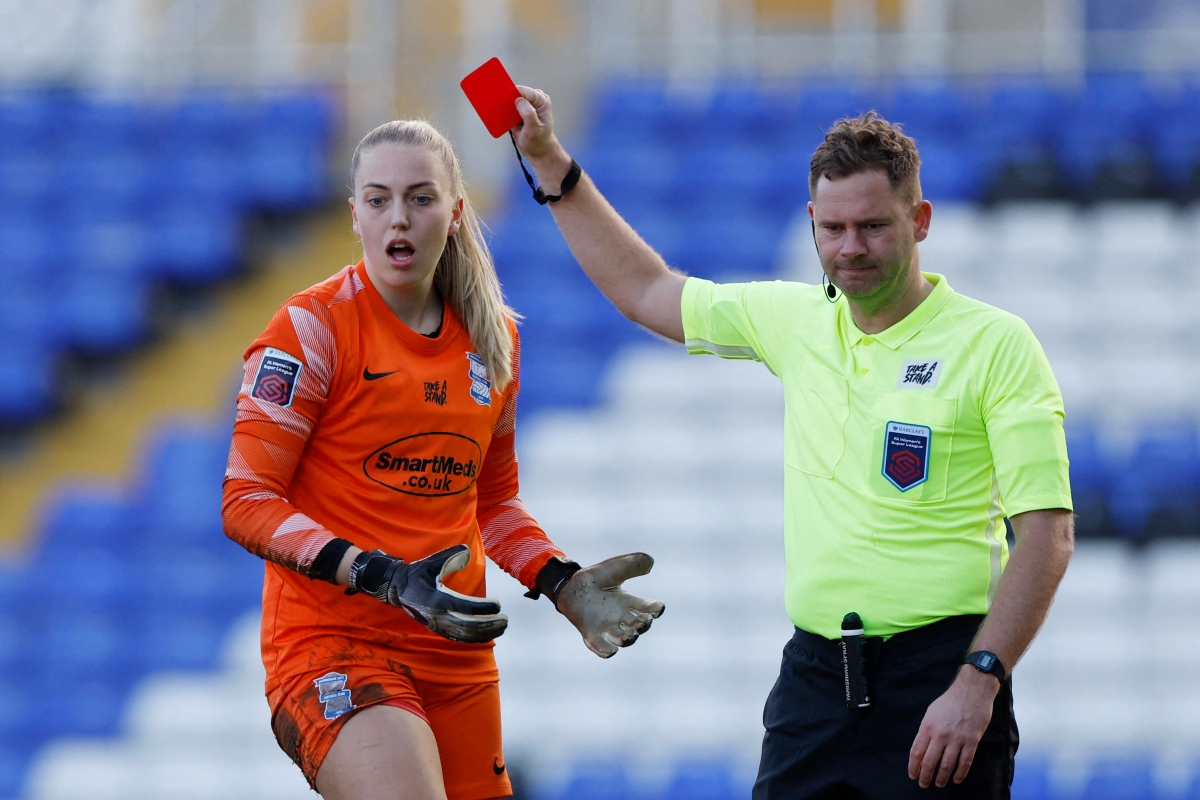 BIRMINGHAM CITY have hit out at refereeing standards in the women’s top-flight after winning an appeal against the sending off of Emily Ramsey.

The St Andrew’s stopper, 21, was given her marching orders on Sunday during a clash with Leicester which her team went on to lose.

But today it was announced the red card decision had been rescinded by the FA.

And the Blues keeper, on loan from Manchester United, will now be available to play against Tottenham, with her team, who are bottom, battling to avoid relegation.

Referee Robert Whitton dismissed Ramsey for a foul in the penalty box on Jess Sigsworth in the 26th minute.

The striker went on to convert a spot-kick to put the visitors 1-0 up at St Andrew’s with Leicester going to seal a 2-1 away victory and move five points clear of their rivals.

However, Birmingham later launched an appeal with the use video footage and photos that led them to a successful claim for wrongful dismissal.

And the club say they are dismayed by the calibre of officiating in the WSL this term and want to continue discussions with football authorities and refereeing chiefs.

A statement on Birmingham’s web site said: “Despite being successful in its appeal, the club remain disappointed with the level of officiating in the Barclays FA Women’s Super League this season.

“We hope for continued dialogue with the FA and PGMOL to improve the standard across all female leagues in England.”

Birmingham’s criticism come just under a month after Arsenal boss Jonas Eidevall called for referees in the WSL to become full-time professionals.

The Gunners chief made his comments after a controversial goal his team conceded to Manchester City, with ref Abigail Byrne deflecting the ball in the build-up.

However last February, the FA said it had no plans to introduce full-time referees in the women’s top tier for at least three years.

Last year Joanna Stimpson, the Association’s professional game refereeing manager said: “Over the next three years we plan to really increase that level of professionalism around the Women’s Super League and the Women’s Championship.

“Will that mean full-time referees in the next three years?

“No – potentially after that, we don’t know, we wouldn’t like to commit to that, but it is certainly our vision to have full-time match officials for the Women’s Super League.

“But we are unfortunately driven by the value of the league.

“If there is an injection of income from somewhere then it could change.

“We want to make sure we have got the infrastructure in place that when we have financial backing we can go with that.”