EX-ARSENAL manager Arsene Wenger believes England are ‘super-favourites’ to win Euro 2020 ahead of the semi-finals.

The legendary coach also believes Gareth Southgate’s side produced a ‘perfect’ performance in their quarter-final victory against Ukraine.

“They didn’t concede a goal, easily qualified, could rest important players. To win a tournament you need a stable defence.

“He [Southgate] has kept the defence stable and improvised a bit up front.

“He has not found the complete formula offensively but they have not conceded a goal.

“They are super favourites, for me, to win this tournament.”

Wenger, who is currently Fifa’s Chief of Global Football Development, knows English football well after managing the Gunners between 1996 to 2018.

He isn’t the only football icon to praise England, with Newcastle hero Alan Shearer telling BBC Sport: “Something special is happening.

“We started the tournament slowly, we’ve been improving in every game.

“My head is telling me to calm down but my heart is getting carried away and long may it continue.

And Brazil legend Roberto Carlos has given his approval, responding to an Instagram post from Luke Shaw with clapping emojis.

But England aren’t getting carried away, with manager Southgate concentrating on the semi-final against Denmark and encouraging fans to enjoy the quarter-final triumph.

He told the press: “We want to go two steps further and I know what will be happening at home and that is great.

“It’s lovely to send everyone on a Saturday night with a beer in hand or in the air, they should enjoy it.

“It’s been a long year for everybody and I’m chuffed that the two performances have brought so much happiness to people.”

In this article:Arsenal, Featured, FIFA 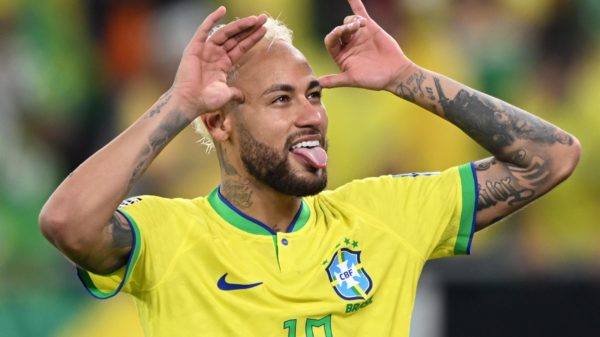 Neymar admitted he thought his World Cup was over due to an ankle injury after making a goalscoring return in Brazil’s last-16 win over...