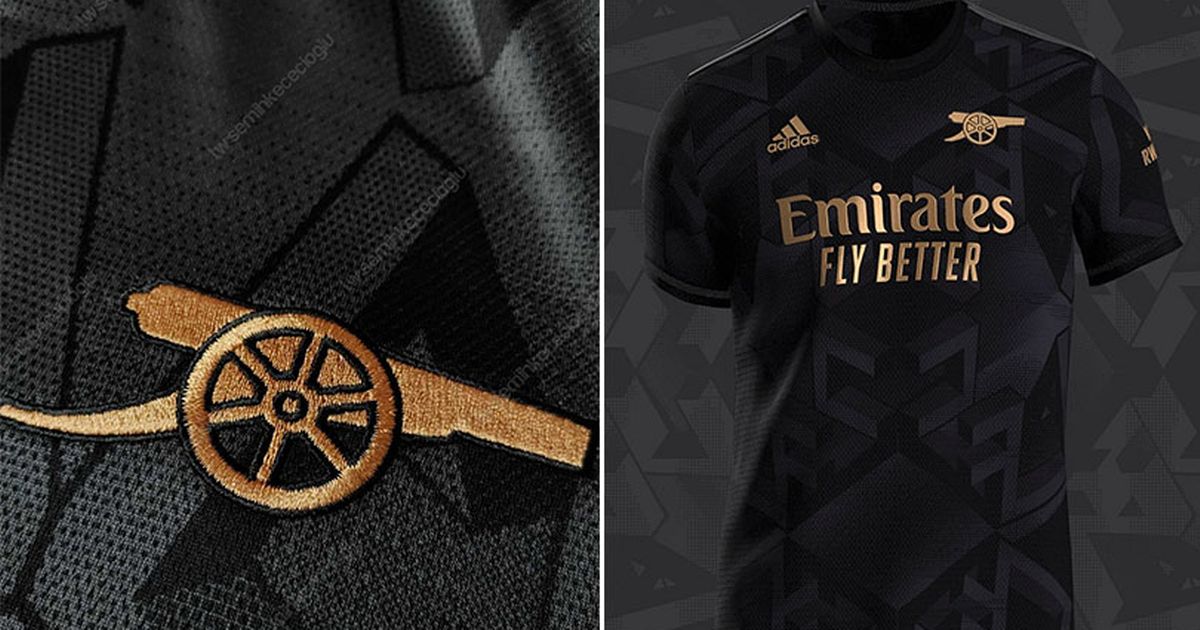 Arsenal ’s new 2022/23 kit has been leaked online ahead of its official release to fans in just under two months’ time.

Leaked images of the new shirt – manufactured by Adidas – have appeared in online circles and are hugely different to the kit expected to be released. Originally, it was expected that the Gunners’ away strip would be a totally black effort.

However, according to Twitter user @semihkececioglu, the fresh design is black with a striking underlaid geometric design seemingly spelling out the letters ‘AFC’. The badges and sponsor logo appear to be a gold colour with the iconic canon – deployed on the 2021/22 away shirt – in pride of place on the chest, rather than the club’s full crest. Meanwhile, the distinctive adidas three stripes are grey.

As of the time of writing, the kit is not yet confirmed and the sale dates to the public have not been set. As per Twitter user @AFCFixtureNews, the shirt will be launched on Wednesday July 20 ahead of the Gunners’ pre-season friendly against MLS outfit Orlando City. It is anticipated to go on sale to supporters on the same day.

The North London side have already unveiled their home shirt having donned the strip in their clash with Everton on the final day of the 2021/22 season. The Gunners enjoyed immediate success with a 5-1 victory at the Emirates Stadium.

They are set to renew their rivalries with the Toffees this summer, with the two sides scheduled to come together during pre-season on July 16. That is followed by their game against Orlando, whilst Mikel Arteta ’s men round-off their commitments in the USA with a game against Premier League rivals Chelsea at the Camping World Stadium.

Arsenal’s away kit has been leaked online
(

It is black with a striking gold trim
(

What are your thoughts on Arsenal’s potential away kit? Have your say in the comments below

After returning to the UK, the Gunners then take on Spanish side Sevilla in the Emirates Cup, with the first match of the Premier League season expected to take place just a week later.

Arsenal fans will also hope to get a glimpse of the Gunners’ new away kit across the continent next term as they compete in the Europa League, having missed out on a top-four finish to local rivals Spurs. Arteta’s men will join Manchester United in pot one for the group-stage draw.

However, the draw ceremony is not anticipated to take place until late August, with qualifying and play-off rounds still to be played. The Gunners’ European commitments will get underway on Thursday September 8.

Whilst the home and away kit look to have been confirmed, the Gunners are also expected to release a third kit at some point ahead of next season.