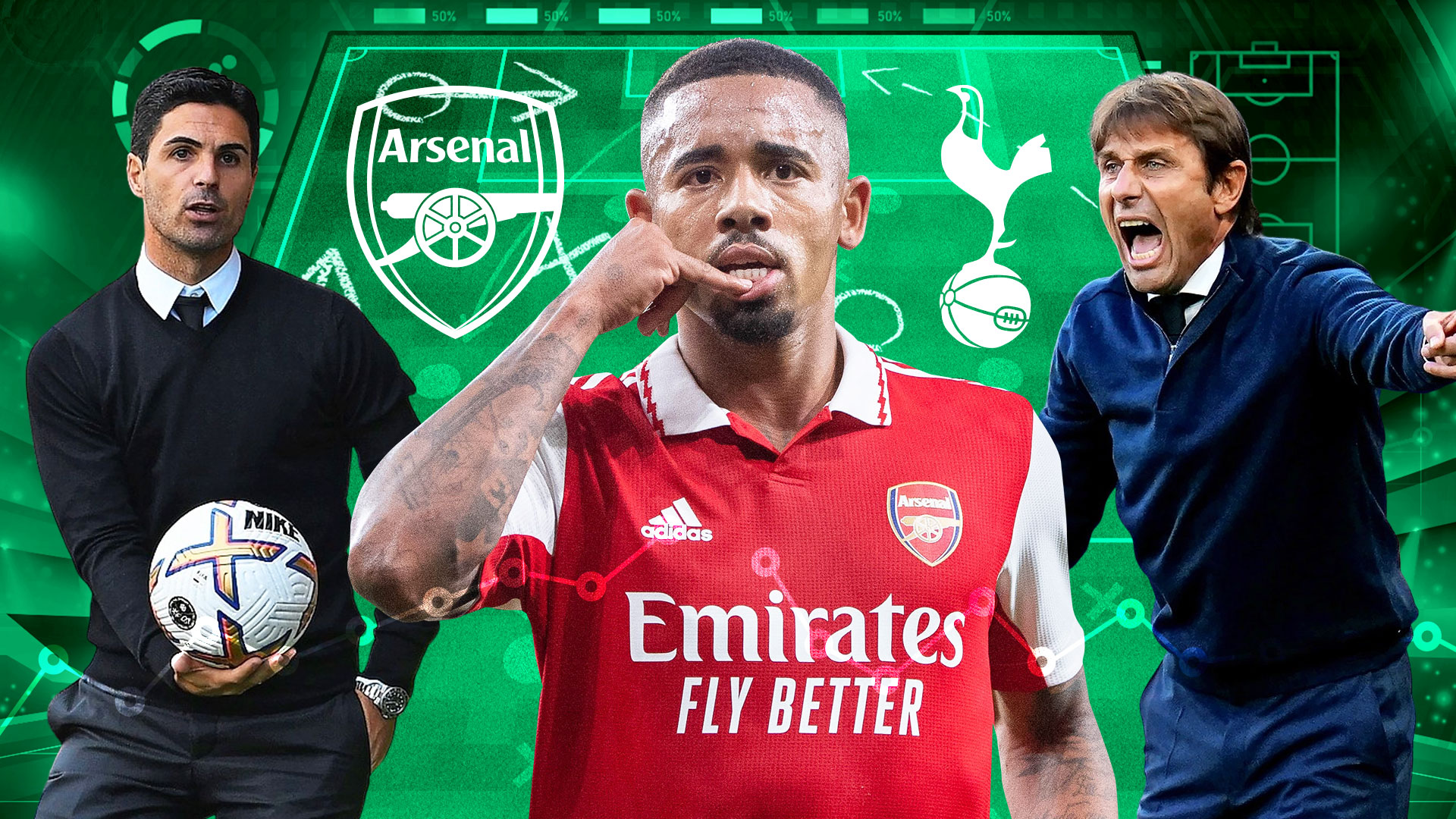 IT’S back, baby. This weekend sees the return of the Premier League following the international break and first up is a mouth-watering clash between Arsenal and Spurs in the North London derby.

This is a fixture which is never short of passion, both on and off the pitch, but this season it feels different. For the first time in a while, both sides are performing well and competing towards the top of the Premier League table with Arsenal currently sitting in first and Spurs in third. There is also a sense that this match brings up an intriguing contrast in tactical styles.

Under Mikel Arteta we have seen Arsenal adapt into a very impressive possession-based side who use a lot of principles of positional play (as Manchester City do under Pep Guardiola). On the other hand, Spurs are a side who have been created very much in the image of their coach Antonio Conte – horrible to play against, compact and rapid on the break. We know Arsenal will rotate and try to find ways to dominate the space in the final third and we know Tottenham will try and bully their rivals before getting the ball forward quickly.

Which style will come out on top and can Arsenal find the space in the final third that they need to play in their style?

At his peak for both Bayern Munich and Germany, we saw Thomas Muller perform as arguably the most effective and interesting forward in European football for many years.

His game was not about his physical or even his technical abilities – but about his ability to recognise and use space. To put it more simply, Muller was very rarely where opposition defenders thought that he would be and he never really played as a striker or an attacking midfielder but instead as something in between the two.

There are similarities between that version of Muller and what we are seeing so far from Gabriel Jesus this season for Arsenal. Let’s be clear though – Jesus is a very different footballer than Muller. He has the physical and technical base that the German seems to miss plus the Brazilian forward is extremely effective in terms of finding and occupying space and never being where the opposition defenders think that he should be. Better than Muller? Possibly, yes.

Jesus has a clear tendency to drop out of the penalty area and to look for opportunities to pick up possession in the channels or even in the wide areas. When doing so he forces the opposition defender to make a choice. Do they follow the Brazilian out and leave their defensive position or do they allow him to drop out and pass the problem to someone else? This idea will be key on Saturday with Conte preferring to play in a back-three system. Will he leave three defenders with essentially no one to mark or will he instruct one defender, likely Cristian Romero to follow the Brazilian closely? And if it is Romero, in which minute does he get booked for kicking Jesus up in the air?

Part of the danger of Jesus in this Arsenal side lies in his ability to drop out of the area before quickly moving back into the area at an angle to attack a pass or to look for opportunities to attack the weak points of the opposition defence.

Jesus is quick, dynamic and decisive and he wants to get on the ball deep before then making a pass and making aggressive runs to break the last line and break through into the penalty area. How Spurs deal with his threat will be one of the keys to this match.

Arsenal want to be in control

Here, they are the home side and Arteta very much prefers a style of play in which they will look to control possession in the first two-thirds of the pitch before then being a bit freer with their movement in the final third.

We can contrast that to Spurs where they will play with a line of three defenders, none of whom are particularly well known as ball-playing defenders. There will be a double pivot ahead of them in the midfield with Rodrigo Bentancur and Pierre-Emile Hojbjerg controlling the centre. You could also make the argument this season that Spurs have shifted to being more effective defensively than they are going forward with the much-vaunted attack of Dejan Kulusevski, Harry Kane, Son Heung-Min (and now Richarlison) struggling to an extent to get going this season. Son’s taken much of the flak until his hat-trick last time out, but none of them have really set the league alight yet this campaign.

How though will Arsenal look to control the centre while still being effective in the attack against a strong Spurs defensive block? The answer lies in the fullbacks.

The signing of Zinchenko in the summer from Manchester City was one of the keys for Arsenal as he has allowed Arteta to play with inverted fullbacks who look to take up central spaces when the side are in possession of the ball. This is something that the Scottish international Kieran Tierney is less comfortable with. In possession Zinchenko on the left and, to a lesser extent, Ben White on the right will now come inside into the centre of midfield.

These movements from the Arsenal fullbacks then allow the attacking players, including Martin Odegaard from the ‘10’ position, to push high and into the attacking third. Even when the opposition win the ball back the positioning of the fullbacks in inverted positions allows Arsenal to retain a solid defensive base that makes it hard for the opposition to get out effectively.

This match will be interesting to see how the two coaches balance their approach in the attack and defence. If Conte leaves his wide forwards high out of possession will Arteta still be confident in allowing his fullbacks to move inside? As the midfielders for Arsenal push up how will Spurs retain their central structures? We believe that Conte will be less inclined towards taking a risk and this will allow Arteta and Arsenal to control the space and the game. And it really does come down to what they do with it.

Spurs and their defensive core

If we are right in that Conte will be more risk averse in this match and cede the control of the match to Arteta and Arsenal (while still looking to attack through quick transitions) then the performances of the two midfielders in the 3-4-3 shape that Conte prefers will be key.

In the summer we saw the club complete the signing of the Brighton midfielder Yves Bissouma but so far the Malian international has struggled to break into the first-choice midfielder with both Bentancur and Hojbjerg continuing to impress. There’s been talk of Bissouma struggling to get up to speed tactically, meaning Conte continues to trust last season’s pairing.

While the defensive line and back three for Spurs are relatively passive and deeper in their positioning the two midfielders ahead of them will be aggressive in their approach to preventing Arsenal from being able to play through and into central areas. Rodrigo Bentancur has shown himself to be an extremely effective ball winner in central areas with his physical capacity to run all day and enter into more physical challenges to try to regain possession.

With the danger that Arsenal pose with the likes of Zinchenko and the Swiss international Granit Xhakha on the ball it will be exceptionally important for Bentancur, and to a lesser extent Hojbjerg, to be strong and active against the ball in looking to move high quickly to disrupt the Arsenal attacks. If they can turn the ball over time and time again here, then that will allow them to feed that front three early and who knows what damage they could do to the Arsenal backline.

What does all this mean?

Look, you probably didn’t need us to tell you that Arsenal will look to get on the ball and Spurs will look to hit them on the break.

The keys here are about what happens when that does happen – if Jesus can find space and drag the Tottenham back three into areas they do not want to be, that will be dangerous.

But, if the Spurs midfield duo can win that battle and release the front three early then we could see a memorable smash-and-grab from Conte’s side.

The most likely result? As always, in a game like this, the highest probability is it will be a draw. Let’s just hope it’s an entertaining one.

The October Total Football Analysis Magazine is hitting the digital bookshelves on Tuesday, October 4th – pick up your copy here.